Round 2: Kazuya Hirabayashi vs. Kei Ikeda 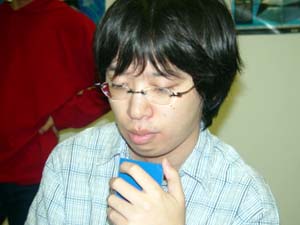 Kazuya Hirabayashi is a Constructed specialist, and lately has been putting up finishes that show he has the playskill to go along with his deckbuilding reputation. He made the Top 8 of Grand Prix Okayama, and came in ninth and Pro Tour San Diego a few weeks ago, missing the Sunday stage on tiebreakers. This round, he has an affinity mirror match against Kei Ikeda.

Hirabayashi opened with Disciple of the Vault, and Ikeda had Arcbound Worker. Hirabayashi played Frogmite on turn two, and Ikeda played Skullclamp, followed by a Frogmite for free. This left one mana open to activate the Skullclamp, allowing Ikeda to draw two cards and put the Worker counter on the Frogmite. Hirabayashi played Thoughtcast, followed by Arcbound Raveger. Ikeda had a Thoughtcast of his own, and played Welding Jar followed by a pair of free Myr Enforcers. He put Skullclamp on a Frogmite, which got through for damage. This was followed by a second Skullclamp, and Ikeda ended his turn. Hirabayashi played Welding Jar and a second Ravager, and did nothing else. Ikeda put both Skullclamps on a Frogmite to draw cards, and then put one on an Enforcer. He brought out a Ravager of his own, and attacked with the Enforcer. Hirabayashi blocked with his Ravager and Frogmite, and after damage went on the stack he sacrificed both to the other Ravager. Thanks to Disciple of the Vault during this exchange, Hirabayashi was able to push through enough damage for the win. He counted and showed Ikeda the two Shrapnel Blasts in his hand. All Ikeda could do was smile, and get ready for the second game.

Both players started with Arcbound Workers. Ikeda attacked with his for one, played Chromatic Sphere, and had no second land. Hirabayashi's Worker came over for a point, and he played a Frogmite along with a Skullclamp. The Clamp went right on the Worker, giving Hirabayashi two cards and making the Frogmite 3/3. Ikeda cycled through his Sphere to play a Disciple, but still had no second land. Hirabayashi played a Ravager and a Disciple of his own, making his board even more menacing. However, Ikeda played a Ravager followed by three free Frogmites, making the best of a bad situation and keeping himself in the game. Hirabayashi put Skullclamp on his Frogmite, and ended his turn. Ikeda played a second Disciple, which would have given him the win. In response, Hirabayashi used Shrapnel Blast to kill the first Disciple, but was still in trouble. Ikeda attacked with everyone, and thanks to the Ravager/Disciple team was able to force through enough damage. 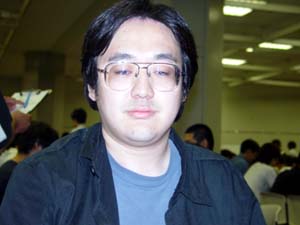 Ikeda mulliganed down to six. Once again, both sides had a Worker on the first turn. Hirabayashi played Chromatic Sphere, followed by Thoughtcast. He sent his Worker in for an attack, and it got through for a point. Ikeda's Worker swung back, and he played a Ravager. Hirabayashi's Worker attacked past the Ravager for a point, and Hirabayashi cycled through a Sphere to play a Disciple. Ikeda played Skullclamp and put it on the Worker, then attacked with his Ravager for three. Hirabayashi was stuck at two lands, and didn't have the action affinity cards to keep pace. Ikeda played a Welding Jar, then put Skullclamp on a Frogmite and attacked with his creatures. The Disciple blocked the Frogmite, and the Ravager became bigger as Ikeda drew more cards. With the help of Seething Song he used Shatter to blow up Hirabayashi's Great Furnace, and then played a Talisman along with another Ravager. A turn later, Hirabayashi conceded.