Round 2: Ken'ichi Fujita vs. Takashi Narishima 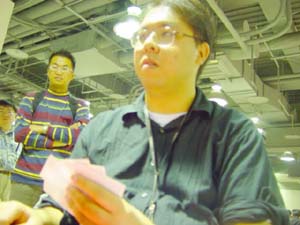 Japan's Big Man of Magic, Ken'ichi Fujita has fallen on some hard times. Once a familiar, if imposing, figure on the Pro Tour, now he finds himself with only one bye at this Grand Prix. Woe to his opponent, Takashi Narishima, who didn't expect to face competition this fierce this early.

Narashima started out with island and then Basking Rootwalla. Fujita's Innocent Blood took it down. Narashima tried another, protecting this one from a Blood with Envelop. Fujita had Chainer's Edict.

So things were looking pretty good for Fujita. He had to let an Aquamoeba survive to hit for three with the help of Deep Analysis. Skeletal Scrying got him some more cards, and Cabal Coffers really got his game going. Another Blood took care of the Aquamoeba. Tainted Pact got him Diabolic Tutor, which in turn fetched Mirari. It resolved with Fujita still at fifteen.

Narashima's board at this point was five lands and a Wild Mongrel. A Mirari'd Rancid Earth deprived him of islands. Haunting Echoes stripped his library of Envelops, Rootwallas, Aquamoebas, and Analyses, these last thanks to a hard-cast one on his turn previous. However, Fujita was down to just swamp in hand. Narashima madnessed out an Arrogant Wurm.

Fujita ripped Mind Sludge. He looked at his twelve available mana, thinking about the Chainer's Edict in his graveyard. He cast it and copied it. Narashima responded by pitching an Aether Burst, then saving his team with a second one. The Mongrel came back down, and the Sludge forced out the Wurm. But with nothing in reserve, Fujita fell to the beats. Had he Sludged instead of Edicting, taking his six points of pain, it might have turned out differently.

Fujita started the early beatdown in Game 2 with Nantuko Shade. Narashima made an Aquamoeba and declined to block. Mesmeric Fiend revealed his secrets. He held four land, Bearscape and Arrogant Wurm. Fujita stole the Wurm.

Narashima swung for three and dropped Bearscape. Fujita returned the favor for seven. This time Narashima held back. He let the Shade in again, falling to three. On the next pass, he pitched a card to his Aquamoeba, made a bear and chumped. Envelop stopped Diabolic Tutor. Fujita pressed on, forcing more discards and chump blockers.

Finally, he pulled Cabal Therapy and checked for Upheaval. He missed, but saw Squirrel Nest and Wonder. Luckily, he had Rancid Earth in hand. When that drama played itself out, Fujita found a second Shade with Tainted Pact. Now he started getting through for one a turn.

Narashima held on as best he could, throwing all his resources into staying alive. Ultimately, he was one turn shy of playing a desperation Upheaval, with Fujita's Mesmeric Fiend dealing the lethal point of damage. 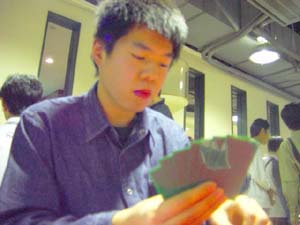 Things didn't go well for Narashima from there. His freshly-drawn Aquamoeba fell to an Edict, and he was forced to start discarding. Fujita dropped Mirari, setting up Cabal Therapy. Next turn he copied it. Aether Burst freed the Envelop to stop one. The other dispatches the Nests and sees two Wurms, Persuasion and Mongrel.

Narashima drew Tarnished Citadel, but held back on his Mongrel. It was Fiended away the following turn. A copied Pact got Fujita Coffers and Therapy. The Therapy was copied next. Envelop reduced its effectiveness. It stole a Wurm and madnessed the other into play. The Fiend was sacrificed to flash the Therapy back, and now Narashima had no hand.

He drew a Wurm and swung for four. Fujita Edicted him and ripped his deck apart with Haunting Echoes. Screams of the Damned was an unexpected insurance policy. For three turns nothing happened. Narashima played Analysis twice, but found no gas. Fujita checked his hand with Mesmeric Fiend, seeing nothing of interest. He chose not to Screams in response, as the only card he feared was Upheaval, and he needed the 1/1 attacker.

His next draw was Diabolic Tutor, however, and it got him Nantuko Shade and another Tutor. Narashima was forced to play out his hand of blockers. Fujita wrecked them with the Screams, and then swung for the win.