Round 2: Laura Mills vs. Sol Malka 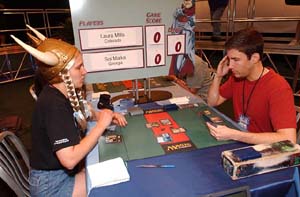 Laura Mills is the only woman playing in this year's U.S. Nationals. She's also wearing a Viking helmet, complete with fake blonde ponytails, and a Team Invisible Juggernaut T-shirt declaring their motto: "RTFC." In a unique twist on the more common story, it's Laura who has to twist her husband's arm into helping her playtest. Mike Mills (her husband) was actually the third person I ever played Magic against – back when we were both students at the University of Minnesota in 1996 – but he hasn't played a tournament since then. Laura, on the other hand, has been a regular at most events in the Denver area for years. She usually judged, but decided to try her hand at playing competitively at Regionals and after getting into the Top 8 she even dragged Mike to Orlando to keep her company and watch her play. Mills found herself taking on GP Tampa Bay champion Sol Malka in a round 2 feature match and Mark Rosewater claims it was the Viking helmet, not her gender, that earned her a seat in the Feature Match area.

Mills is running the blue-green-splash-red Opposition deck that has been steadily gaining in popularity over the last few months. In a stunning turn of events, Malka is playing a blue-black-green deck with Finkels, Deeds, etc. Mills had a turn two Squirrel Nest in game 1, but Malka had Pernicious Deed ready to wipe out not just the Nest, but also the two Birds that constituted half of Mills' mana supply. The game went just the way Malka wanted from there, as he followed up his Deed with a pair of Spiritmongers. Mills had a second Nest, but without Opposition (or even a fourth land) she just had no answer for two enormous fatties attacking her very turn. 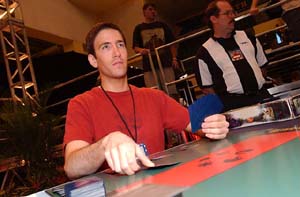 Birds of Paradise accelerated Mills to a turn 3 Opposition and she had to feel good since Malka had just one turn with main phase mana to drop a Deed, and even if he did she had a back-up Opposition in her hand (the only spell that was there). Malka tapped his Bird to Duress away the backup and then tapped his three lands to play Deed. Ouch. Malka's next play was Fact or Fiction and things just went down hill (for Mills anyway) from there.

I actually walked away from the feature match area to watch more interesting matches, but Magic is a funny game sometimes. Malka's three-color mana base includes a lot of pain-lands and he took at least one damage from pretty much every spell he played in the entire game. Mills calmly played out creature after creature, forcing Malka to play spells to deal with them and occasionally doing a little damage herself. She even sent Merfolk Looter into the Red Zone because she figured the Fire in her hand was her only real way to win. In the end, Malka had finally found his Spiritmonger, but he knew he was dead if Mills ever managed to draw into both Fire/Ice and red mana. She did. Malka just shook his head ... exclaimed "yup" ... and slapped his cards together, frustrated, as he started to shuffle up for game 3. He looked over his scorecard between games and calculated that he did 11 damage to himself that game. 9 is a much lower target than 20, I suppose. 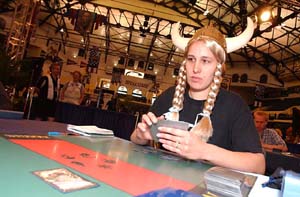 Mills played a turn 2 Mongrel to start game 3 and then just kept attacking with it and countering Malka's big threats until Malka was forced to blow his Deed, netting just the Mongrel for his trouble. Mills then played out the Squirrel Nest she had been saving and begged her deck to deliver up the second blue mana she needed for a game-winning Opposition. Malka Duressed away one Opposition, saw the other, and desperately played a main phase Fact or Fiction, digging for an answer. Mills split up the piles into "Plague or no?" and Malka took the Plague. With Squirrel Nest turned off and Opposition trapped in her hand, Malka was able to hit her once with Spiritmonger. Ice then tapped the Monger once, Rootwalla tapped it once, and that bought her enough time to draw blue mana for Opposition. Malka had done 7 damage to himself over the course of the game, so once again her target was low. After tapping all Malka's creatures with Opposition, Mills stared at Malka's life total (7) and the cards in his hand (2) and tried to figure out if he could have anything to stop her from killing him with Rootwalla plus Wild Mongrel. She gambled that Malka didn't play Repulse and went for it. All Malka could do about her attack was extend his hand, congratulate her, and kick himself for sideboarding out a Swamp for game 2.

Asked about her first feature match Mills explained "That was too nerve-wracking ... I'm not sure I want to do that again."