Round 2: Lee Copus vs. Mark Brown

Thorough professionals - Mark spends the opening minute claiming there is a staff conspiracy, whilst Lee takes the next 5 minutes fishing his deck out cad by card from his bag.

Mark won the flip and elected to draw, as most people do in this format, with the jovial Tom Hardy continuing to banter, with running commentary on his Victorian friend.

Lee opens to the red zone with the new Uktabi Orangutan (Viridian Shaman, which destroyed the Bonesplitter) and picks up a couple of cards with a Thoughtcast (for 4 mana). 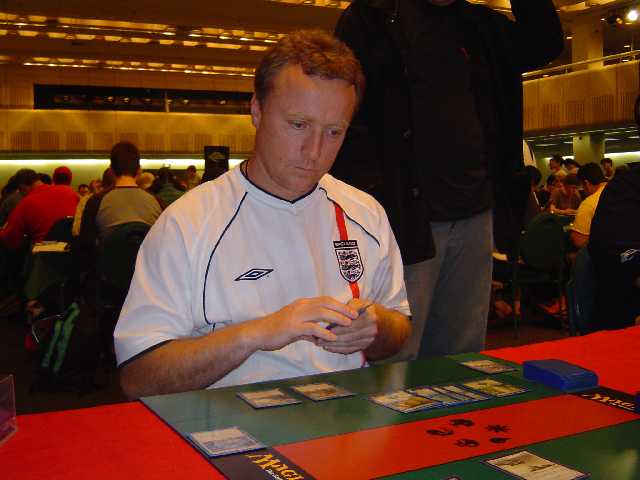 Mark was finally able to defend with the Goblin War Wagon - Which was trumped by Lee's Fangren Hunter.

Lee sends both his men to the red zone bringing Mark to 12, following with a rearguard of a Copper Myr and a Steel Wall (with the wall being equipped to fly ready to block the Slith).

The wall was shattered as the Slith got his first counter (Lee 14), leaving the "spikey bits" wagon at home to deal with the defender. The Fangren grabs Lee's gear and flies over for 5, before palming off the Hoversail to the shaman - hoping to curtail the Slith's growth spurt.

Mark's Scimitars were finally shared as he moved to a fully defendable position. Lee played a Stalking Stones and then a Malachite Golem but again the battle lines had been clearly drawn with no attacks following.

The Malachite Golem took to the air momentarily with the scimitar, but was brought down by an Electrostatic Bolt. The shaman took the downed Hoversail and the Scimitar, displaying the versatility of equipment in this format.

Mark finds a better home for the final War Wagon Scimitar, in the form of a Skyhunter Cub. He then attacked with the Slith, happy to trade that and the newly cast Soldier Replica for the flying Fangren.

It was then Lee on the retreat as he readied himself to defend, equipping the Hoversail to the Myr, taking the War Wagon dropping him to 10.

Lee committed to an alpha strike with a double equipped Stalking Stones, Mark took down the stones with the cub trading - taking 3, dropping him down to 4, Lee follows with a Tel Jilad Archers.

Mark comes up with nothing, and with both blockers being non-flying artifact creatures - was finally beaten by a flying Shaman and an unblockable archers.

No equipment to begin as Mark started out with a Leonin Den-Guard and a Skyhunter Cub. Nothing by third turn for Lee, as he cast Thirst for Knowledge at the end of Mark's 3rd turn (discarding 2 forests).

4th turn saw a Goblin War Wagon - this time on Lee's side. Leaving Mark left to ponder where his equipment had gone, with the 2 Leonin Den-Guard and a Duskworker to defend.

Lee dropped more big guns, with the MVP of game #1, the Fangren Hunter, but Mark was ready for it with Arrest, with the dusk guard swinging for 2.

More land came for Lee, but so did a Soldier Replica and a Gold Myr. The War Wagon was shattered as the Duskworker went in for another 3, this time being pumped putting Mark down to 14. 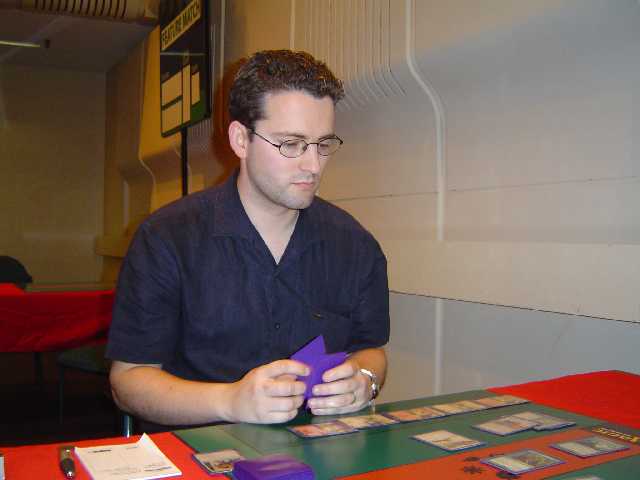 Had Lee drawn too much land? Obviously not, as he was able to play both the Quicksilver Elemental and a Loxodon Warhammer.

Another Den-Guard came down as Mark questioned whether or not the "Whammer" should have ever been printed. The then equipped Elemental attacked, and was triple blocked by both cubs and the Duskworker. Slim resistance is offered with a Loxodon Mender but the Tel-Jilad Archers provide a balanced defense on Lee's side of the table.

Mark is now in "Draw-Go" mode, his poker face melted under the continuing pounding of the warhammer, which is attentively being used in conjunction with Lee's 1/1 Myrs. Mark is not out of it yet as hope against hope was offered (although very slim) with a Goblin Charbelcher. A Tel-Jilad Elite took up the attack with Lee's hammer and swung with the Archers putting Lee above forty life.

Mark had answers but not to the threats that Lee had been posing as the Charbelcher proved to be ineffective. Mark finally runs out of blockers as Lee wraps the second game in extra turns.