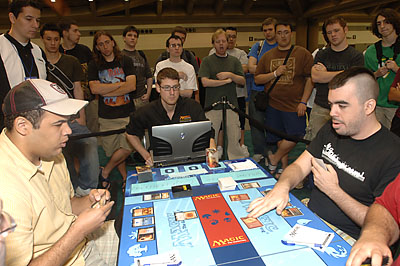 Osyp Lebedowicz and Billy Moreno provide their own color commentary.

his was sure to be an "entertaining" feature match as two of the more colorful characters in Magic sat down to battle. In front of me sat Osyp Lebedowicz, one of the most boisterous and outspoken members of the tour. Anyone who has ever heard a story told by, or even just involving, Osyp isn't soon to forget it. His opponent this round is Billy Moreno, most recently making headlines as the creator of the Hulk Flash deck that took the recent Legacy Grand Prix by storm. Billy come to the table with a little less hair than I'm used to seeing on him (well his head at least) as he' s sporting a brand new 2007 model mohawk. As if the contents of this feature match weren't enough, playing right next to them at the table was Antonino DeRosa. Ant is a big man with a big mouth and truly one of the funniest people I've ever had the pleasure of talking to. He's one of those people that you can't help but like. As they wound up for the beginning of the match, and while the pair I was covering had their decks checked, the trio began a bit of friendly banter.

While rolling against his opponent, Ant wondered, "Does anyone ever roll low?"

"I go low if they beat me," Osyp offered him with a smile as he won (legitimately) his roll against Billy.

Billy and Osyp watched the match going on next to them. Ant was working his way through a tough decision as the event photographer came over to snap a few shots. As his thinking pose continued, Billy ragged on him for posing. "He definitely held it longer for the picture."

The judges finally returned with the decks and after a quick word to both the players, they let the match get underway.

Billy started out the game in lightning fashion, building his board with a Mogg Fanatic and an incredibly powerful Dark Confidant. Not willing to let the card advantage engine get online, Osyp downed the Bobby with a Lightning Helix. After a few turns of posturing, Osyp made his first addition to the board in a Firemane Angel. After a pair of Hit // Runs from Billy, though, Osyp was down to only lands and 9 life. Osyp seemed unfazed, though, as he simply put another Firemane into play. Billy dealt with that one too, before he played a Giant Solifuge into the red zone.

Osyp was hanging on though, as the two life a turn from the dead Firemanes was keeping him out of lethal range. After Billy committed another Dark Confidant to the board, Osyp decided it was time to reset things with a Wrath of God. This put him firmly in the driver's seat. Billy was left with only one card, and Osyp was steadily gaining life. After Osyp played a third Firemane, things looked like they were over for Billy. After playing out a couple more uneventful turns, Billy conceded.

Between games, Brian David-Marshall dropped by to sneak into a quick picture with Osyp.

"Jesus!" Osyp said, startled, when he realized BDM was hovering over what a second ago was an empty shoulder.

"You know me, gotta get a couple of pictures in the coverage," BDM laughed.

"Oh yeah, I'm so handsome. They all want some pictures of me," Antonino crooned sarcastically as he batted his eyes at Brian.

Osyp threw his first hand back into the deck, and while he was shuffling, Billy noticed that you could see writing on the back of one of his cards through the sleeve. Like a stand-up guy, he immediately alerted the judge about it. While the judges made sure that it was the only card marked in the deck, Osyp couldn't contain his laughter.

"I just want to point out that we got deck-checked this match," he managed to get out between laughs.

"Yeah, yeah," was the only audible response from the judges. They grabbed a new Mountain for Billy, gave him a warning for marked cards, and set the players off again.

Billy started things off with another early Mogg Fanatic and a Dark Confidant which was lucky enough to survive this game. Osyp did have a Court Hussar to stall things on the ground, but a Char from Billy cleared the way for his ground troops. Another Hussar came down for Osyp and gummed things up again. A Lightning Angel a turn later gave him another blocker, and a way to start getting on the offensive himself. Billy's deck started to work against him here, as a couple of hits from his own Confidant had put him into dangerous territory as well. He went into the tank for a bit, with Osyp having a clear board advantage and being up on life. He came out with a Giant Solifuge that Osyp's Hussar was more than happy to jump in front of. After another Lightning Angel came down for Osyp, Billy drew his next card and extended the hand.