Round 2: Making a Breakthrough

Sitting down at the feature match area, I was eagerly anticipating seeing the deck Chris Lachmann had brought to the battle. When he led off the first game with an Isamaru, Hound of Konda, a little part of me died. Despite his Top 64 finish at this year's US Nationals, Chris Lachmann will forever be known to the Magic community as one of the "Sliver Kids" that took over Pro Tour–San Diego. As much fun as it would have been to watch him confuse his opponents with an ever-increasing swarm of little men with cool abilities, Lachmann, the consummate pro he is, decided to bring a deck that might actually be able to. . . you know. . . win.

His opponent this round is one of the best players on the planet. Period. He has amassed such a large number of Pro Points it's almost hard to believe that he has yet to crack the Sunday stage of a Pro Tour. If his Dredge deck can continue to churn out turns like it did in the last round, he may be able to do more than Top 8. 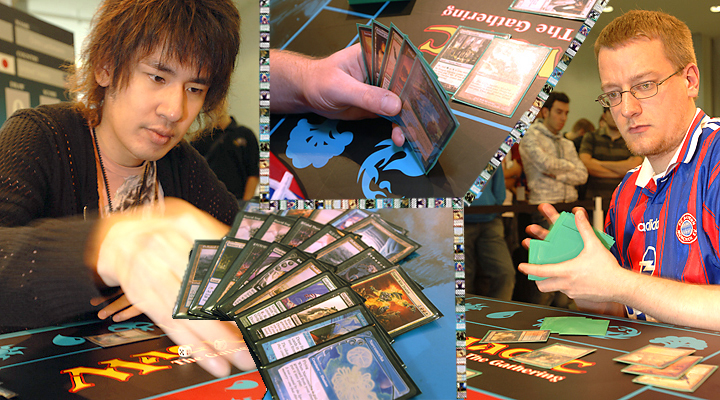 Lachmann won the die roll and decided to play first. Die rolls can mean so much in this format with the overwhelming aggressiveness of some of these decks, and in this matchup in particular. After both players decided to keep their opening hands, Lachmann started the game with a Temple Garden and an Isamaru, Hound of Konda. Morita considered his options a while before deciding on a Watery Grave-fueled Careful Study. After doing a bit of homework, Morita sent a Stinkweed Imp and a Wonder to his graveyard.

Lachmann's next turn of simply attacking, playing a land, and saying go was considerably less impressive than he would need to keep up with Morita's good Dredge start. Morita dredged back his Imp on his next draw step, which put a Golgari Grave-Troll into his graveyard. Then, as visions of Jim Morrison danced in my mind, he played an absolutely huge Breakthrough, which set off a chain a dredges resulting in two Narcomoebas and a graveyard full of goods. Morita used his graveyard full of goodies to flash a Cabal Therapy back, knocking a Lightning Helix out of a hand containing a Gaea's Might, Tribal Flames, and Incinerate. A second Therapy took the Flames along with it.

Morita's Breakthrough left him with one card in his hand at the end of his turn, but the damage was mostly done. Cards in hand aren't what make the dredge deck run, it's the overwhelming card advantage a massively filled graveyard can provide.

Lachmann passed his next turn, and Morita went for the throat. If the game wasn't already firmly in his hands, Bridge from Below Zombie tokens and a few Ichorids super-glued it there. Lachmann couldn't hang with the stellar draw from Morita and he conceded the game.

Both of these decks are highly aggressive, and without proper follow-up aggression from Lachmann, it can be hard for him to win. Zoo relies on its blazing early speed to put the opponent on the defensive so that its powerful finishers like Tribal Flames and Gaea's Might can put the game away if it goes to long. The Dredge decks usually take a few turns to get set up and running, but they don't ever run out of steam. Once they get going, they steamroll until the game ends (or a Tormod's Crypt gets activated). Even if Lachmann had gotten a few more creatures, it's unlikely he would have won considering how quickly Morita got the train going that game.

The second game put Morita at six cards and on the receiving end of a similar draw from Lachmann. A turn-one Isamaru and no play on the second turn wasn't the prettiest start, but Morita had mulliganned, which boded well for Lachmann. The Dredge deck can mulligan fairly well, since the number of cards in hand rarely matters, but with decreased access to the dredge cards and enablers, a mulligan can also spell bad times.

Morita dropped a disappointing Narcomoeba into play on his turn. The lack of any dredge or dredge enabler was going to be bad if Lachmann got the ball rolling. And roll the ball he did. He used his mana to Lightning Helix Morita at the end of his turn. Following that, he blazed onto the board with a Seal of Fire and a Dark Confidant. Confidant really makes this deck go, since you have to commit so many cards to the game each turn to get the win as fast as possible.

A Stinkweed Imp from Morita on his next turn gave him the first dredge outlet of the game, but it appeared he was going to be in for some pain, and soon. Lachmann drew his card and an extra Tribal Flames from the Confidant and then shot the Stinkweed Imp out of the sky with his Seal of Fire. That would give Morita the chance to dredge, but it wasn't going to be soon enough. A Tribal Flames to Morita's head and an attack that exchanged Lachmann's Confidant for Morita's Narcomoeba left Morita at a precarious 4 with no board. After his dredge revealed nothing of value, Morita conceded the second game.

Morita began the rubber game with a turn-one Putrid Imp. That's about the best thing his deck can hope to get for the first turn, since it allows him an easy turn one outlet for his dredge cards. A Mogg Fanatic from Lachmann wouldn't be able to kill the Imp if Morita managed to get threshold, so he held off on taking the imp out. Morita activated his Putrid Imp during his upkeep by discarding his younger imp cousin, Sir Stinksalot. So far, Morita was two for two on good turns. A main phase Breakthrough was the icing on a ridiculous opening. On turn two, Morita had a graveyard of nearly 25 cards! Buried amidst the dross were a couple of Narcomoebas, a few Cabal Therapies, every dredge creature under the sun, and a Dread Return or nine. There were so many cards in his bin he almost had to borrow some of Lachmann's.

Morita used his recently regrown 'Moebas to attempt to Cabal Therapy a Yixlid Jailer (tech!) from Lachmann's hand. (Un)fortunately, Lachmann didn't have the Future Sight "timeshifted" card. What he did have was enough goodies to stock a candy store. Two Lightning Helixes, two Dark Confidants, a Tribal Flames, and a Gaea's Might would normally have Chris jumping for joy. However, with Morita thumbing through a graveyard bigger than his library, those goods weren't going to be good enough. As Morita began going through the motions of playing a few million spells from his graveyard, Chris decided not to delay the inevitable.