Round 2: Mauro Bongiovanni vs. Joey Siagian 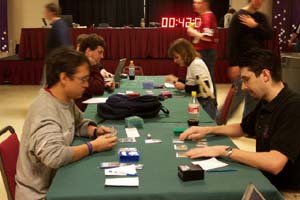 If there's one thing Mauro Bongiovanni and Joey Siagian have in common, it's their bewilderment at being chosen as a feature match. Siagian has been making the rounds on the Asian Grand Prix circuit, but a trip stateside gave him a chance to test his game against America's best. Today he is with Scrounger-Oath. Bongiovanni is a familiar face at all the tournaments around his native Montreal, as well as an off-and-on Pro Tour competitor. Last night he came within a hair of snatching three byes with blue-green madness, the same deck he's piloting today.

Siagian won the coin flip (a stat being tracked across the tournament on match slips as a courtesy to Wizards R&D), and after mulliganing led with Treetop Village. Bongiovanni one-upped him. Careful Study put two Basking Rootwallas into play. Siagian looked to have the answer: Oath of Druids, but Bongiovanni's Daze practically fell out of his hand. While Siagian dug with Accumulated Knowledge, Bongiovanni replayed his lands and resolved Waterfront Bouncer. Siagian's second Oath was no threat at all.

Bongiovanni hit him to eleven and passed it back. Siagian's Oath served up Battlefield Scrounger after ten cards. He had no further play. Bongiovanni sent it home and crashed in with his team. Siagian activated his Treetop Village, only to see it returned as well. The Oath gave up another Scrounger, but the Bouncer had its number. Siagian fell to seven.

His next Oath activation flipped his whole deck into the 'yard. He played Krosan Reclamation to get back plains and Cunning Wish. It wasn't looking good. He drew and played the plains then ate two more damage. He drew his last card, and scooped. 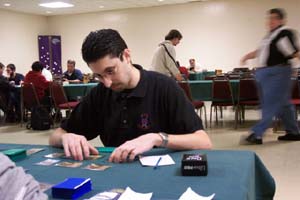 This time around Siagian had his blue mana, and it set up some strong ridiculousness. He had Brainstorm - Flooded Strand, then Counterspell and Gainsay for Bongiovanni's plays of Wild Mongrel and Waterfront Bouncer. He refueled with a pair of Accumulated Knowledges while Bongiovanni failed to draw his third land. He discarded Deep Analysis and played it on his following turn, but drew only spells.

Meanwhile Siagian cycled through his deck with Brainstorms, fetchlands, and Intuition. This last showed Bongiovanni the remaining two Knowledges and a Cunning Wish. Bongiovanni let him draw four. From there things just got silly. Siagian resolved both Future Sight and Oath of Druids. Bongiovanni had Naturalize for the Oath. Mana Leak stopped it.

Bongiovanni walked Aquamoeba into the Gainsay on top of Siagian's deck. When Capsize targeted his island with buyback, Bongiovanni scooped. 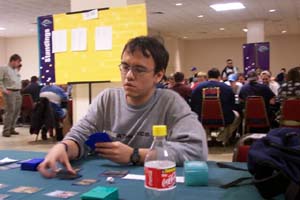 Finally it was Bongiovanni's turn to go first. He opened with Rootwalla and Wild Mongrel to Siagian's Brainstorm. Siagian played more lands, but unfortunately for him, Bongiovanni didn't need to cast many more spells. He pitched and resolved a Deep Analysis. Mana Leak stopped Wild Mongrel, and Forbid cut down an Arrogant Wurm, but when Siagian tapped five it was only for Future Sight. Bongiovanni did some calculations, and came up with a number greater than Siagian's life total.