Round 2: Mike Dove vs. Jason Opalka 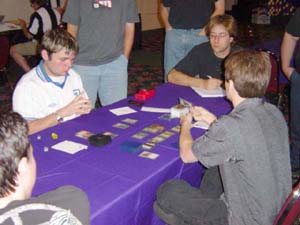 Round two of GP Cleveland put Cleveland's very own Jason "T2King" Opalka vs. Mike Dove from Chicago, IL. Opalka probably made his name more for his IRC and online Poker shenanigans than his magic career. He was one of the minds behind the first High Tide deck at PT Rome. Mike Dove is an old school Chicago player from way back. He is well known in the Chicago area for the now-famous "play me again for $20" method of losing matches.

Opalka played the Zombie/Upheaval deck that originated at Worlds by the Japanese and was tuned and played by several pros at last week's GP London. Opalka admitted to having no play experience with the deck. Dove played WG Madness. A deck he was intimately familiar with having played it throughout this PTQ season in the Chicago area.

Opalka won the die roll, but got off to a slow start with only two lands for the first six or seven turns. Still his game did not look bad with a turn three Infestation and plenty of Aether Bursts for Dove's creatures. He played his third Aether Burst and sent Dove's Brushhopper and Phantom Centaur back to the hand. He followed this up on his turn with a Standstill. Opalka put the pressure on by discarding a Deep Analysis and a Cabal Therapy even though he knew Dove was holding two Centaurs thanks to an early Peek. 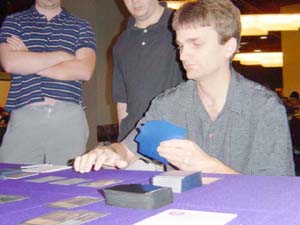 Dove broke the Standstill with a Brushhopper, which Opalka played Circular Logic on by making a Zombie. This gave him two attackers on the next turn that Dove used Vengeful Dreams to remove. Dove played a Centaur, but Opalka forced him to sack it and flashed back Deep Analysis in the hopes of finding a way out of losing. The second Centaur had no answer and Opalka was forced to go to 4 life. The next turn he Upheavaled to stay alive. This did not help him because Dove just played a Mongrel and activated Glory for the win.

Game 2 saw little action and a lot of thinking from both sides. Dove was stuck with only Forests in play. Opalka meanwhile made no plays that did not draw him cards until turn eight when he played Upheaval with no Zombie Infestation. Instead he played Standstill. Unfortunately Opalka was on only two life and was forced to counter or kill all of Dove's threats. Opalka found an Infestation, and started to achieve a beatdown on Dove. Dove managed to get a Tireless Tribe on the table though with three mana open. Opalka only had one Edict and an Arrogant Wurm played with madness came through with a Glory activation for the win.