Round 2: Mike Flores vs. Alan Webster 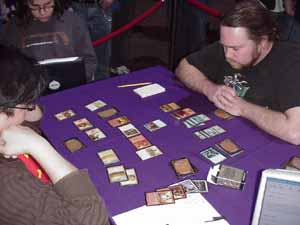 Mike Flores is a showman first and a Magic player second. While he waited for his opponent, sometimes-writer and curmudgeon Alan Webster, his loud lamentations about the quality of his sealed deck drew a crowd of listeners. When Webster did finally show up, he insisted that he had the worse deck of the two. Flores would have none of it. The only solution was to fight for it.

“You may not be impressed with my play here.” – Mike Flores

He played mountain, tapped it, and threw down Warbreak Trumpeter. He got in for one before Riptide Mangler was able to stand in the way. He did find a third mountain to play another morph, but that was all the action from his side of the board. The cavalcade of mediocrity continued with Merchant of Secrets from Webster. Flores was visibly taken aback.

Of course, he missed his next land drop and tried to bluff like his morph was a threat. The Mangler blocked without fear. Flores passed it back. Webster showed a second Merchant of Secrets. Flores couldn’t contain himself.

“You are AWFUL. I thought I was bad, you have a Pyknite theme deck.” – Mike Flores 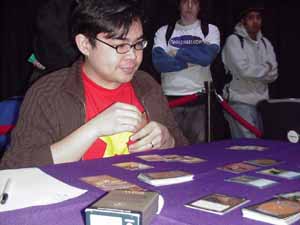 Webster took his barbs with a smile, threatening to bring out Supreme Inquisitor. Flores found another mountain and still couldn’t act, so he just waited while Webster played some more wizards. A fifth mountain hit the top of Flores’s deck, and Crested Craghorn tackled the Mangler. Information Dealer worked to get Webster to something that would affect the board. Flores obliged by playing nothing more than a morph.

Down came the Lavamancer’s Skill. Webster shot the recent morph, but it was just Battering Craghorn. Flores turned his remaining morph sideways, and then misinterpreted “No effects” as “No blocks”. He tapped his six and showed Rockshard Elemental, mercilessly cutting down the Merchant of Secrets Webster pushed in the way. Webster fired back with a morph that was Skirk Commando, finishing off the Elemental with his Skilled wizard. Flores decided it was time for game two. 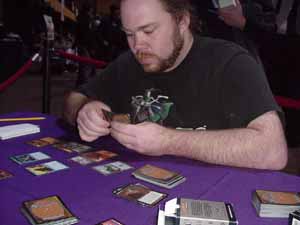 Flores swapped to his “B” deck, taking out his black and blue cards for a more streamlined red-white build. He shut down Webster’s early plays of Riptide Mangler and Keeper of the Nine Gales with Chain of Plasma and Shock. His morph was momentarily stopped by Mistform Wall before being joined by a friend. Merchant of Secrets wasn’t really earning his keep.

Flores had Goblin Sledder, and when the Wall and Merchant teamed up to take down a morph he showed it to be Battering Craghorn. Imagecrafter let Tribal Golem hit the ground running, but Flores shut it down with a Crested Craghorn. Another gang block went the wrong way when Flores turned over Daru Sanctifier.

And then Webster cast Supreme Inquisitor.

Flores was short on action, but he did have a Gustcloak Skirmisher. His constant pressure had put Webster down to six. He drew three straight land while Webster failed to find a solution to the Skirmisher. Essence Fracture bought Webster a turn, but not even Merchant of Secrets could turn up a solution.

An opening Deftblade Elite from Flores earned a plaintive “Noooooo!” from Webster, whose horde of 1/1’s was now at Flores’s mercy. Again Riptide Mangler was on the scene to hold the fort, and followed by Merchant of Secrets while Flores had a morph. The Elite jumped the Merchant, and Flores’s morph was revealed to be Daru Healer.

“I really don’t like the looks of that guy, Mike.” – Alan Webster

He had Crested Craghorn ready to take it down, but Flores plucked land number five off the top and showed a Craghorn of his own. His Healer meant the Craghorn would survive eating the wall to take down another monster. Webster tried making Merchant of Secrets and a morph. The Craghorn came in and Webster doubled up. Flores showed him Shock, keeping his Craghorn.

Webster’s resources were exhausted. He had just Imagecrafter and Supreme Inquisitor. Flores finally traded his Craghorn for the Imagecrafter and morph. Then he looked at his six lands and Dragon Roost and Frenetic Raptor in his hand, before dropping the Roost and hoping for a seventh land. It didn’t come, but Webster was drawing nothing but land, so the late Raptor was still a ridiculous threat. With Deftblade Elite clearing a path, the game was short.

Of course, victory was not the end for Mike Flores. Behind him, Seth Burn and Paul Jordan swooped down to critique his awful play.