Round 2: Mike Long vs. Noah Boeken 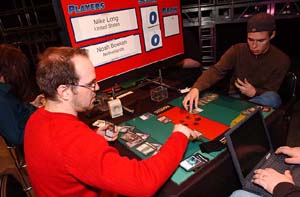 Noah Boeken bounced over to the feature match table and started talking immediately. "You know what I'm playing, Randy? 88 cards ... right here, 88 cards. I don't know how to play it yet, but this could be a historic weekend for Magic." When Mike Long showed up Boeken demanded "Look at my deck." Long laughed at the top of his lungs: "really?!" When it came time to shuffle up Boeken teased "even you can't stack this deck."

Long hasn't played on the Pro Tour in almost a year because he has been concentrating on his store. He's had some success at Japanese Grand Prixs, which he attends mostly for the opportunity to buy and sell cards. With the Pro Tour back in Japan, Long was back in the game, running a black-blue Compulsion deck. Boeken's deck is also black-blue, but his gimmick is Traumatize with Psychatog. Trevor Blackwell built the deck and 88 cards was the number chosen so that he could Traumatize himself and get enough cards into the graveyard to win with either the 'Tog or maybe Ichorid.

Long went first in game 1 and got down an early Compulsion. He followed up with "Shadowfinkel Shadow Finkeltrator." Boeken bounced it once with Aether Burst, but then watched in horror and Long found not one, not two, but three Aether Bursts of his own to clear Boeken's blockers out of the way. Once Long got his engine going, drawing two cards per turn and cycling as many as four via Compulsion, Boeken was pretty much helpless. Long's seemingly neverending supply of Edicts, Persuasions, and Circular Logics prevented Boeken from ever blocking. Eventually, Long iced the game with an Upheaval, floating enough mana so that his Psychatog and Infiltrator were the only permanents left in play. 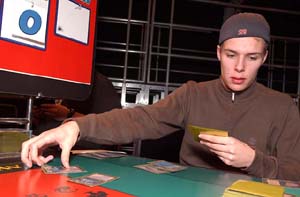 Long was still wondering about Boeken's deck, asking "So what's the deal? You couldn't decide between all the iterations of blue-black so you just put them all in there." Boeken answered, "I should have built that deck," gesturing toward Long's cards. Long kept up his seemingly friendly banter, which was really more of a subtle psychological attack, wondering aloud "Morgue Theft? Morgue Theft ..."

Boeken played a turn 2 Mesmeric Fiend and used it to deprive Long of his Shadowmage Infiltrator. That still left Long with a turn 2 Compulsion, which he gladly tapped out for, knowing the odds of Boeken having a turn 3 Infiltrator of his own weren't very high. Having watched all the Madness tricks Long played with his Compulsion in game 1, I was actually surprised Boeken let him get his engine started. Boeken kept the advantage early, adding Llawan, Cephalid Empress to his side of the board and bringing her back with Morgue Theft once she died to an Edict.

However, Long wasn't under a lot of pressure. He slowly built up an amazing hand and got 8 lands into play. After countering Boeken's attempt to play Upheaval with Circular Logic (drawing a card in the process), Long was ready for an Upheaval of his own, floating enough mana to drop Psychatog into play. Boeken just slouched further into his chair and got hit for 20 on his next turn. 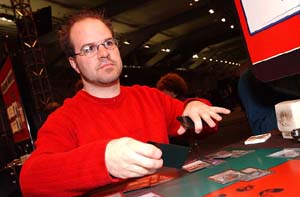 Both players looked through each other's decks afterwards. Long described his own deck as pretty boring, feeling that anyone could have come up with it in the first week of testing. He lost round 1 to a black-blue deck that was actually set up for the mirror. Long was still reeling from the beating he took at the hands of Plagiarize plus Cephalid Coliseum. He lost his hand while his opponent Ancestralled. However, in this round things went Long's way. He got turn 2 Compulsion both games – a card he described as "the Thawing Glaciers of the format – why aren't more people playing it, it's nuts?"