he younger Ruel needs no introduction. The French player has seen the top tables many times, with five Pro Tour Top 8 finishes and an outrageous 26 Grand Prix Top 8s, including five wins. Although he did not achieve his Level 8 status again at the end of last year's pro season, reducing his ability to travel, he is still a reasonable bet for success at any event he attends. 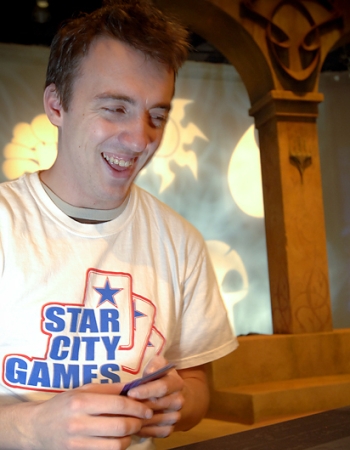 A baby-faced Olivier Ruel is jovial as always.

Martell is a less well-known player, but quite skilled in his own right. He finished in the Top 4 last night at the Last Chance Qualifier, well known to be a brutal competition for the few remaining spots in the main event. Martell worked with Zvi's team and regularly attending the now-infamous Finkel drafts and had no doubts in his mind he would qualify last night.

"I shaved for the first time in like, 10 years, recently," said Ruel, with a smile on his clean-shaven face.

Martell led with a turn one Arbor Elf, matched in speed but not in quality by Ruel's turn one Plant token off of Khalni Garden. Martell attacked in with his Elf and make a Lotus Cobra off of his Forest and Dread Statuary. The token production continued for Ruel with a turn two Nest Invader. He flashed a Snake, a Wolf, and an Elephant token to the camera, indicating his delight at hopefully casting Bestial Menace later in the game.

Martell, not to be outdone by Ruel's token antics, ramped to four with his Cobra mana and plopped down a Kozilek's Predator. Ruel calmly decided his cares were for the future, not the present, as he laid an Island and cast See Beyond. He dropped a third land after the shuffle and passed.

Martell knew something about the future his opponent did not, however: hyperspeed acceleration with two additional mana off of a Misty Rainforest, and his Monument Green's deck's namesake: Eldrazi Monument. Suddenly his wimpy 0/1 tokens didn't seem so bad, as he cracked through the skies for 12 damage—one Spawn, one Plant, one Predator, one Cobra, and the original Arbor Elf. One tiny Spawn stayed back to prevent shenanigans, whatever they might be.

"Oh deck," Ruel sighed, after knocking on his deck and failing to draw an answer for the artifact. After a quick Sleight of Hand operation from Sea Gate Oracle, he scooped it up to Martell's lethal flying indestructible armada.

The second game echoed the first in opening, a Plant for Ruel and an Arbor Elf for Martell. Ruel placed a Raging Ravine onto the battlefield next, but Martell once again soared forward in mana production with a Lotus Cobra and a Verdant Catacombs. He added

from the Cobra, fetching a Forest, and laid out another Cobra, gearing up for something monstrous next turn.

Ruel could do nothing but lay a fetch land of his own, a Misty Rainforest, and pass.

Martell had another fetch and floated four green mana, then tapped another and made an Eldrazi Monument. He swung with the two Cobras for 6, bringing Ruel to 14. He ended his dynamite turn with another sick one: Nest Invader, excellent fuel for the Monument. 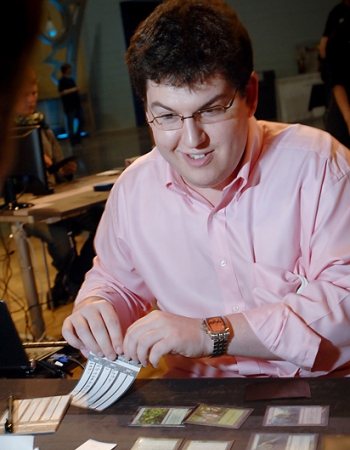 Tom Martell: Just as cheerful, if a little stubblier.

Ruel fetched twice down to 12, and with four mana available, he did some quick calculations: a mere 11 damage would be coming over next turn. With a tiny space to breathe and try to regain some semblance of control, he ramped with a Kozilek's Predator and passed.

Unfortunately, Martell had an excellent haymaker follow-up with Vengevine. The addition of another hasty 5 damage across shut the recovery window, and with Ruel tapped out, that was that.