Round 2: The Most Perfect Answer

either of these teams could have been happy to see the other team sit down adjacent to them at the draft table. On top of individual skill, both teams had practiced the format in particular. Players at this level remember what they passed and what got passed to them, building a picture of what's out there and what they are going to be facing. In a string of unlikely corner cases this match, as one team came up with a particular threat, the other team came up with The Most Perfect Answer anyone could possibly have against it. In fact, this happened not once, but three times. 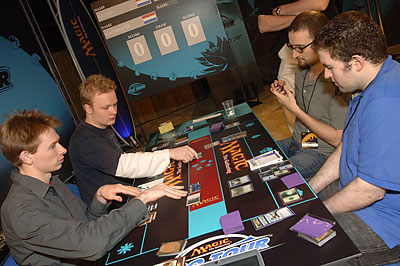 Van Heeswijk brought up a red-white hand of early attackers including Benalish Knight. Karsten backed him up with blue-green, featuring an opening hand with the Planar Chaos blue removal of Piracy Charm and Pongify.

Finkel played red-blue, while Ravitz brought blue-green with a little bit of black. Interestingly, Finkel and Ravitz split the blue pretty evenly and left most of their black and white in the sideboard. Ravitz's opening hand showed Essence Warden, Dreamscape Artist, two Deadwood Treefolk, and lands. This presented a clear plan: Use Essence Warden to buy time and Dreamscape Artist to accelerate up to the double Deadwood recursion machine. Since Deadwood Treefolk gets a Raise Dead effect every time it enters or leaves play, two of them working together is way more powerful than the "Eternal Witness for Eternal Witness" you may have encountered, getting tons of other creatures back while they're keeping each other alive.

mana up to cover them, representing Cancel. Ravitz Ghostfired the Tim, and Karsten didn't have Cancel after all…but did have Pongify, turning the Pyromancer into a 3/3 Ape and fizzling the burn.

Ravitz snuck in a hopeful turn-two Looter il-Kor, which ate a Ghostfire itself after just one loot. With that foiled, Finkel and Ravitz decided to hunker down until their Deadwood Treefolk came online, gumming up the board with various 1/4s, morphs, and 4/2 red spiders.

Karsten suspended Nantuko Shaman, angling to gain card advantage without slowing down the arms race. It's then that Ravitz came up with The Most Perfect Answer. Take a ponder for a moment: What's the most hilariously specific answer you could ever have to suspended Nantuko Shaman? Ravitz waits until Karsten's upkeep, when the Disciple lost its last time counter. Then Ravitz unmorphed Coral Trickster, tapping one of Karsten's islands. Nantuko Shaman doesn't say "When the last time counter is removed from Nantuko Shaman, draw a card." It says "When Nantuko Shaman comes into play, if you controlled no untapped lands, draw a card." So the card draw is foiled, and Coral Trickster trades with the Shaman on the following turn. Welcome to the Pro Tour.

The board thickened up, with Jedit's Dragoons bringing the ground to a halt. Just as the Dutch looked to tip it over with the beefy 4/4s of Sporoloth Ancient and Fomori Nomad, Finkel and Ravitz stop the ground again with their own 2/6: The notorious Deadwood Treefolk. Looter came back, and it seemed like the ground was locked, but the Dutch sent in a single random 3/3. Finkel and Ravitz were suspicious, but double blocked with Citanul Woodreader and Deadwood Treefolk anyway. I mean, what could go wrong? Any combination of giant growths and bolts would have to deal 10 damage to kill both blockers, and even if Deadwood died, he'd just regrow Coral Trickster on the way out. Even a Spin into Myth or Disintegrate wouldn't stop Deadwood Treefolk from his appointed rounds of raising the dead, because it says "Whenever Deadwood Treefolk comes into play or leaves play….."

In fact, is there any card in the format that can kill Deadwood Treefolk in this situation without letting it regrow anything? As it turned out, Karsten came up with one: The Most Perfect Answer. Karsten Ovinized the Deadwood during combat, making it 0/1, killing it and removing its rules text on the way out so that it couldn't regrow anything. Pretty unlikely, and pretty amazing, but Karsten made it look like he does it all the time.

With the ground clogged, both teams went to other battlefields, with Lucent Liminid from Van Heeswijk and a multi-talented Jodah's Avenger from Finkel. That's when Ravitz dropped the other shoe: Deadwood Treefolk for Deadwood Treefolk.

The Dutch clearly realized that they had to get something going, or the attrition and recursion of Double Deadwood was going to grow overwhelming. Van Heeswijk was down to an Aether Membrane, but Karsten was still full of gas, with Pouncing Wurm, Looter il-Kor, Penumbra Spider, Logic Knot, and Edge of Autumn. Unfortunately, neither Aether Membrane nor Penumbra Spider can stop Jodah's Avenger from getting through for 4 a turn (shrink to gain shadow, shrink again to gain double strike). When Karsten's Looter il-Kor showed up, Jodah's Avenger changed form like Starscream, switching to doing 2 a turn with vigilance to keep the Looter at bay instead. Overall, the Americans were pulling a little ahead, though because of Dragoons the score was still Dutch 29 - 24 Americans… 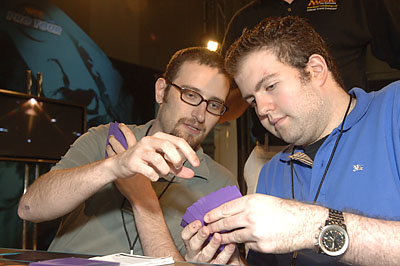 …Until Finkel played end-of-turn Bogardan Hellkite. That put them way ahead. It ate Looter, Lucent Liminid, and a random child of Sporoloth Ancient on the way in, and nothing on the board seemed capable of stopping it. Aether Membrane in particular is a pretty awful way to block Bogardan Hellkite! Karsten did have a Logic Knot and a full graveyard he could burn on countering Bogardan Hellkite if Aether Membrance bounced the dragon, but it would take a little setup. With both Finkel and Ravitz playing blue, Karsten had to look for a good opportunity to make his move, or risk a counterspell from the Americans in return.

The Hellkite and the Deadwoods were the sickest things going, and backed up by Jodah's Avenger, they started making serious dents in the Dutch life total. The Dutch slipped to 9 against the Americans' 20. The Dutch were going to have to solve all three of those threats or mount a sudden "Deal 20" to get out of this alive.

At this point, the Americans just wanted to preserve the status quo, and Ravitz used Piracy Charm on an empty-handed Van Heeswijk in his draw step to keep him from top-decking. Hellkite and Jodah's Avenger and a regrown Looter il-Kor smashed in again. The Avenger in particular is hard to stop because it can become pro-red at any time, and the board showed zero swamps. Fortunately, Van Heeswijk came up, for the third time this game, with The Most Perfect Answer: He played Word of Seizing on the 3/3 shadow Jodah's Avenger, coming up with one of the only red cards that can slip past the Avenger's activated protection from red. Not only does it beat pro-red, but it let the Dutch kill Looter il-Kor, and then they could give Avenger a variety of several vigilances to make it kill itself!

Things went wrong for the Dutch, though, when Ravitz played Healing Leaves on the Looter il-Kor to prevent the 3 damage from the Avenger. The combination of card filtering and evasion damage from the Looter was too much to bear, and Karsten spent his Logic Knot to counter the Healing Leaves, leaving him apparently defenseless against Bogardan Hellkite.

But Karsten knew he wouldn't have mana to Logic Knot next turn, and he knew he wouldn't need to counter the dragon, because on the next turn Karsten untapped and played Take Possession on the Bogardan Hellkite to steal it. The Dutch started sending the Hellkite back for damage, desperately racing the Looter il-Kor. The 5/5 Hellkite was actually way behind in the race with the 1/1 Looter, because the Americans had 2 Essence Wardens by this point.

When the Dutch hit 1 life, facing 20 life for the Americans, the Dutch alpha struck with nearly everything they had, conspicuously leaving back Penumbra Spider. Finkel and Ravitz made a variety of advantageous blocks and took 7 damage. After the incredible comeback punches of Word of Seizing and Take Possession, van Heeswijk unleashed a third comeback hit with Desolation Giant to clear the board and start over, with Karsten still having a grip of spells. But it was not to be, for Finkel had a Logic Knot of his own to seal up the game.

After a game of incredible comeback hits including three Most Perfect Answers and a variety of more universal, powerful comeback answers like Take Possession and Desolation Giant, the Americans had won.

After the game, both teams agreed that the Dutch should have made the 3/3 Stolen Jodah's Avenger into a 2/2 double striker before combat damage, ensuring that Healing Leaves and Brute Force could not save the Looter. That would have opened the Avenger up to death by Sudden Shock, but since Brute Force is common and frequently played, it's the more likely scenario to occur, and thus the best scenario to play around.