Round 2: Nagoya Rematch on Constructed Soil 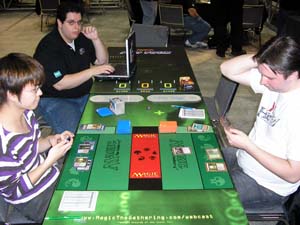 A rematch from the finals of Pro Tour-Nagoya.

and Shu share a moment in time. Anton had just played Mystic ts on Shu's of the Sacred Bell. The aura served to keep Anton's hopes of winning Pro Tour-Nagoya alive by tapping down the 4/3 monk. Anton knew his opponent; this was the third time they had played over the weekend. He was down two games to one in the finals, but this was his fifth top eight and he had never been so close to being a Pro Tour champion.

From the Pro Tour-Nagoya coverage by Scott Johns:

Now almost a year later, they met again. Instead of the finals, though, this time they were both fighting at the 0-1 feature match.

Talking with Anton on Friday morning, he revealed that his play testing for this event consisted of getting together with Johan Sadeghpour. They both live in the same city in Sweden, and Anton only feels comfortable testing live. They ended up getting their green, black and white deck from a friend. Shu worked with legendary deck builder Itaru Ishida. Ishida's deck, -atog, combines the power of Gifts Ungiven with from the Loam and cycling lands. The deck tries to take complete control by using the powerful dredge engine to strip and counter the opponent's resources to nothing.

Shu started with a Polluted Delta, while Anton had a turn-one Birds of Paradise. Anton had a turn-two Sakura-Tribe Elder met with a Force Spike from Shu. Anton laid out a turn-three Sensei's Divining Top but when he missed his third land drop, Shu pounced by hitting the Birds of Paradise with a Putrefy. Shu's game plan appeared to revolve around keeping Anton manascrewed. 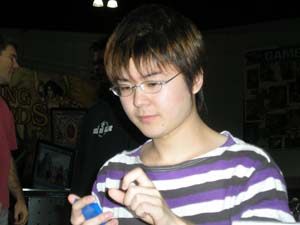 Shu didn't appear to have much countermagic in his hand but Anton was light on both threats and mana. Anton finally found his third land by searching with the Top and placing on top. Shu, meanwhile, just kept playing out lands.

With five lands out, Shu cast a Gifts Ungiven. He went for from the Loam and Barren Moor. While still searching his deck, Shu paused and started to look through again and again. Finally, he looked up and asked for a judge. Shu had realized that a Last Gasp from his sideboard was still in his main deck from the previous round.

After some double-checking the judge gave Shu a game loss in a game. After the match Anton said that Shu certainly would have won the game had he not received the penalty, but that his honesty must be applauded.

Shu laid out land for the first few turns of Game 2 while Anton developed his board with a first-turn Sensei's Divining Top, followed by a turn-two Birds of Paradise. The Top began to find Anton the card's he needed as he sacrificed a Flooded Strand to access new cards with the Top.

This game, the Gifts didn't mean instant death for Shu as he got a mare , from the Loam, Barren Moor and Lonely Sandbar. Anton chose to give him the two spells and named from the Loam for the Therapy. Shu revealed a from the Loam, mare , Counterspell, Psychatog, two s and a land.

Anton knew he needed to get busy before the engine kicked in. He cast a Gifts Ungiven of his own. After about five minutes Anton pulled out Cranial Extraction, Nostalgic Dreams, a Russian 9th edition Reclaim, and Eternal Witness. Now it was time for Shu to go into the tank and finally he gave Anton the Reclaim and Nostalgic Dreams. 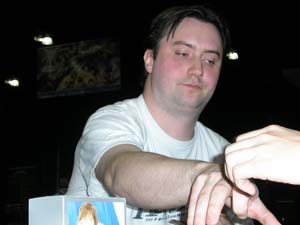 Despite never dealing a point of damage, Anton proved victorious.

With the entirety of card tutoring out of the way, the discard kicked into overdrive. Shu played a mare on his turn taking the Nostalgic Dreams out of Anton's hand. Anton fought back as he used the Reclaim to bring back Cranial Extraction and named Psychatog ripping one from Shu's hand and two from his deck.

Shu decided to reclaim nightmare void and didn't like what he saw as Anton laid down Cunning Wish, Top and Genesis. Shu took the Cunning Wish. Anton played Genesis on his turn and sacrificed it to flashback a Cabal Therapy hitting Counterspell. When Shu dredged the mare , he milled Wonder into his graveyard. Shu realized that he has no ways to win left in his deck (the Wonder was the last damage source in his deck) and conceded.

Anton won the match without either player attacking or dealing a single point of damage to the other.