Round 2: Naoki Higono vs. Tomohiro Tatsumi 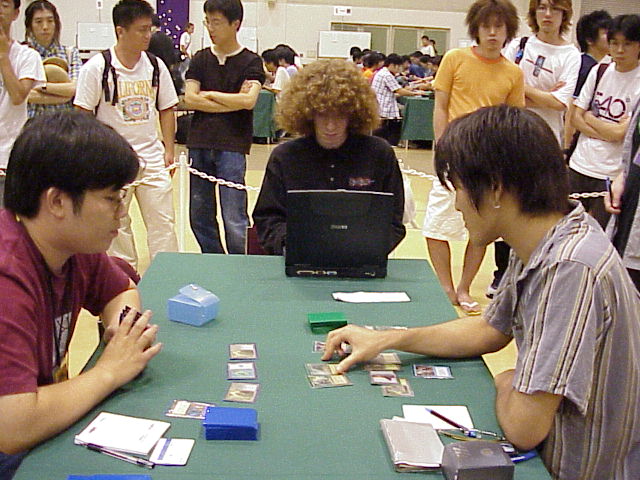 Higono's paper eclipsed Tatsumi's rock, and he chose to play first. He turned over his first seven cards and laughed when he saw no lands there. He piled up into a more acceptable six-card hand. Tatsumi had to think a moment before deciding to stick with his opening hand.

Though Higono had only two lands to start, he busted an early Elfhame Sanctuary, ensuring he wouldn't miss his third land drop. He Harrowed into four lands before Tatsumi could hit three mana. Tatsumi drew another Salt Marsh, and so Addled his opponent for green. He took a second Harrow over Fertile ground, but left Higono with Fact or Friction.

Tatsumi's slow draw let Higono have another turn unimpeded, but he drew only Reviving Vapors. He dropped both Grounds and a second Sanctuary, passing the turn. Tatsumi came down with a Fact or Fiction of his own, and his had berries to spare. He was quick to take forest, Spiritmonger and Repulse over Fact or Fiction and Spite/Malice.

He untapped and dropped Pernicious Deed, tapping out to blow it for two. This wiped out all of Higono's enchantments, and left him with only four mana at his disposal. His draw phase was kind, however, and he drew a second Fact or Fiction. He scored Collective Restraint, Fact or Fiction and island over Dromar's Charm and Allied Strategies.

Tatsumi continued to play for the long game, Addling away the Restraint. Higono drew and passed his turn, and Tatsumi finally went on the offensive with Spiritmonger. Higono played his third Fact or Fiction in desperation. He was forced to take Restock and plains over Collective Restraint, Global Ruin and Sunscape Familiar in hopes of bringing his Legacy Weapon online. He untapped, Restocked mountain and Harrow, then played both to make the full Domain.

Higono tried to hold on, playing Sunscape Familiar and a Reviving Vapors that turned up a Global Ruin, but it wasn't nearly enough. Tatsumi Repulsed the blocker and brought home twelve points of brutality. Higono had no outs. He tried laying the Weapon and Familiar, but Tatsumi had a second Repulse.

Higono was short on business again in game two. He had Sunscape Familiar and plenty of land, but only Gainsay and Dromar's Charm to get things going. Lucky for him Tatsumi stalled on two forests and an island. He discarded thrice before Higono Harrowed into the full Domain.

Tatsumi finally found a Yavimaya Coast, and tried to draw out of his predicament with Fact or Fiction. This only opened the door to Higono's freshly-drawn Mystic Snake. A second Fact or Fiction was Gainsaid. The Snake was Malice before it could go nutty on Tatsumi's head.

Higono had meanwhile failed to draw anything of significance. His Dromar's Charm was Addled away, and Tatsumi bounced his Familiar only to Snake it when Higono recast it. He found a Questing Phelddagrif at the top of his library, but didn't have the tools to push it past Tatsumi's countermagic. He tried to play the waiting game, thinning his library with Harrow. 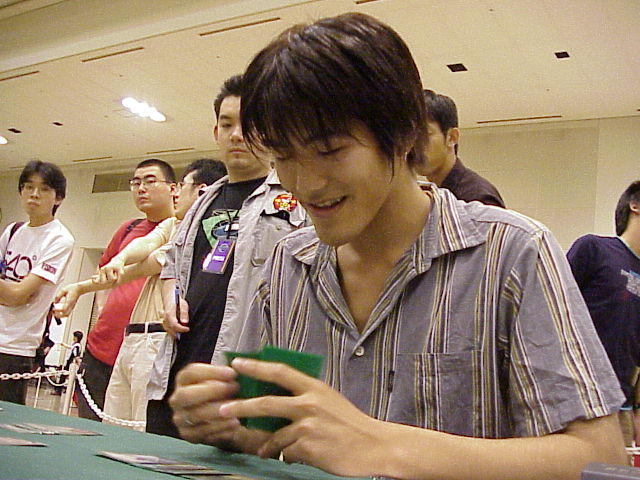 It worked. Higono drew a second 'Grif and it entered play after the original fell to a second Mystic Snake. Tatsumi had no way past it, and had to content himself with Lobotomy. It revealed that Higono's hand was nothing but lands and an Elfhame Sanctuary. Tatsumi took the Coast but didn't search for others, for fear of improving his opponent's draws.

Too bad for him Higono had been living right. He drew Fact or Fiction off the top, and turned over the mighty Legacy Weapon. He wasted no time in taking it. Higono's next draw was Mystic Snake that allowed him to force through a Global Ruin. The game was suddenly, and overwhelmingly, in Higono's favor.

He spent the next six turns dispatching Tatsumi's lands. Tatsumi popped a Deed for four to take care of the creatures, but things were already too far out of his hands. He conceded to buy a third game.

With only four minutes left on the clock it would take a miracle to finish game three even within extra turns. Tatsumi mana stumbled, but Higono couldn't really punish him. His hand was literally filled with countermagic. Two Gainsays, Mystic Snake, two Evasive Actions and Dromar's Charm, as well as Legacy Weapon.

Higono forced a Snake through as an attacker with a Gainsay. Tatsumi still hadn't drawn a fourth land, and when Higono found Questing Phelddagrif waiting for him in his draw step it was like Christmas had come early. Time was called. Tatsumi spent the first extra turn Addling away an Evasive Action and looking sad.

Higono swung with his boys, and then, incredibly, did not pump his Phelddagrif. This left Tatsumi at ten, and Higono only had three green sources on table. Tatsumi handed it back for Higono's final turn. Higono slammed his top card onto the table before drawing it up to eye level. It was a forest. He marched into the Red Zone, just barely edging out a victory.