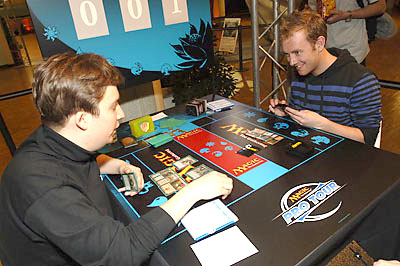 hese two players have been drafting against each other for the last two weeks at a pair of apartments in the Alps, splitting time between skiing and learning the twists and turns of this new, Chaotic format. Siron admitted that Quentin was clearly the better skier of the pair, but Martin was the house loser in drafting. While Siron himself had been doing reasonably well in testing, Florent Jeudon was apparently unbeatable, and may end up as a name to keep an eye on this weekend.

Things started out well for Siron with turn-two Blightspeaker, turn-three Rathi Trapper, but that's where Siron's action ended. By the time he finally drew a third and fourth land, Martin was running him over with blue and red beaters.

Siron reiterated his love for the game as he mulliganned to six cards on the play. Much like in Game 1, he started with Blightspeaker and Rathi Tapper, and then searched out another Speaker and Trapper in subsequent turns, while Martin killed one Trapper with Erratic Mutation and then suspended a Greater Gargadon. At this point Martin's play got rather messy, with a series of small mistakes and forgotten plays looking like they might haunt him briefly - but only until you looked at Siron's board and realized his men were scruffy at best. Undersized black rebels and boring thallids have a hard time keeping up with solid red and blue creatures, even with Martin stumbling on the proper plays literally every turn.

Siron was clearly noticing Martin's mistakes, with his eyes rolling all the way back in his head on multiple occasions, including the last turn where Martin could easily have finished Siron off instead of leaving him at 1, if only Quentin had floated his mana, put Greater Gargadon into play by sacrificing his lands, and then used Bogardan Rager to pump one of his unblocked men. Sadly, Martin failed to get that right, but still won on the back of deck disparity and a little bit of luck. Quentin himself was quite deprecating about his plays, and knew he'd need to tighten up if he was to have any hope of making Day 2.