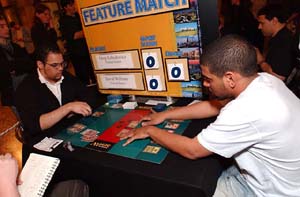 Dave Williams is still looking for high level since his return from a 1-year ban. Dave is running a Goblin deck with Clickslither, Goblin Goon, and the unexpected Skirk Prospector to power out a third turn monster.

Osyp—last year's runner up in the Rookie of the Year race—is hoping to follow up his 16th place finish form Chicago and string together another extremely solid season. He is running the much-anticipated Slide/Rift deck with a main deck Gempalm Incinerator—with more in the board—that could spell trouble for Dave.

Dave opened with a Goblin Sledder and a Skirk Prospector and Osyp had the second turn Lightning Rift making the match resemble something much closer to Limited than Constructed. Dave draw seemed ideal when the Prospector allowed him to cast a Goblin Goon on turn three. Osyp's draw couldn't have been better either as his deck yielded a turn three Astral Slide that prompted a, "How lucky! The god draw over there!" from Dave.

While Osyp was tapped out he was able to bring him down to 10 with the Goon and Sledder. Dave pressed his advantage with a Piledriver and cycled his own Gempalm while Osyp was tapped out and he would not lose anything for long to the Slide. Osyp played a Forgotten Cave and moved to his own end step. He cycled his Gempalm Incinerator and targeted the Piledriver, Astral Slide targeted the Goon—which would keep it out of Osyp's hair until Dave's next end of turn—and targeted Dave with his Rift. Dave saved his Piledriver by sacrificing the Sledder to make it bigger.

Dave played another Sledder and attacked for with his lonely Piledriver bringing Osyp to 9. His Goon returned but Osyp was not out of cycling cards by a longshot and he cast another Lightning Rift and cycled Akroma's Blessing during his own end of turn targeting Goon with the Slide, Piledriver with the first Rift and Dave with the second. When Dave used his Sledder to save the ½ he chose not to pay for that activation and was content to keep the Goon busy and make some headway into Dave's life total.

Osyp played another slide and continued with his plan of keeping the Goon away during turn. When Dave added a Clickslither to his board, Osyp had to start cycling during Dave's turn to not le the Insect through. Osyp played Jareth—the ultimate blocker—and passed the turn back with two white open to protect it from Threaten. 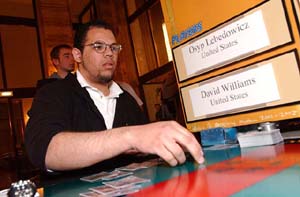 Dave played a second Goon and attacked with Goon and Clickslither. While Osyp was making his decisions about which monster to block the piece of paper with his name on it fell onto the play area. Dave: "Bad sign...what does that mean?" Osyp finally decided to block the Goon and Dave sac'd it before damage to deal 5 to his opponent—dropping him to 3. Dave: "What a draw this game... I was all happy that it started out good for me too. Did you draw the Rorix too? All the members of team legend?" All Osyp could do was a face-up Daru Sanctifier destined to block a Goon.

Dave attacked with everyone and Jareth ate the Clickslither and the Sanctifier did the job he was asked to do. Dave decided to try and make his move and Shocked Osyp to 1. When that resolved he played the last card in his hand—another Shock. Dave held up his empty hands and asked if Osyp had the Renewed Faith, "I'm out! Renewed Faith or no? Every card, every piece...I'm out.

Osyp didn't betray his hand and thought while Dave steamed, "Don't slow roll me. I HAVE NO HAND!!!"

Osyp, "I have to think..." Unfortunately for dave he was deciding whether he wanted to cycle the Renewed Faith or hard cast it. When he finally cycled the Faith Dave lost his cool, "What was that about scumbag?"

He was not mollified when Osyp explained his deliberation, "At least put it on the table when I ask if you have it... Put me out of my misery. That was so cold! Who does that? That was sooooo baggy...extremely baggy!"

Osyp; "C'mon, there was an audience."

Dave was still angry as he boarded out 4 Sparksmiths and 4 Gempalms for 3 Naturalize, 1 Forest, and 4 Avarix—the tech sideboard card for this tournament against Slide decks.
Osyp brought in the rest of his Gempalms and took out his maindeck Sanctifiers.

Gary Wise sauntered by and asked why Dave and Osyp always seem to play each other. "Racial profiling," quipped Dave and with a joke under his belt he was able to calm down and turned his attention to the comeback.

Dave led off with another Sledder and played Taskmaster and Prospector on turn two. While Osyp debated his turn two play Dave chided him, "Rift... go. After 30 minutes of thinking...c'mon!" Instead Osyp cycled a Gempalm to kill the Sledder. 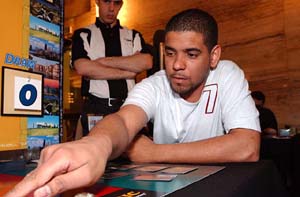 Dave got in for three with Clickslither and shrugged when Osyp played his Astral Slide. He had another Naturalize but—of course—Osyp had another Slide. Osyp played a face-up Exalted Angel and sent the turn back to Dave who had taken no damage thus far save two fetch lands.

Osyp was able to keep the insect at bay with Slide while shooting Dave with the Rift. There was no slow roll this game as Osyp showed a handful of cycling to Dave who conceded.