Round 2: Prague's Favored Son Back in Action 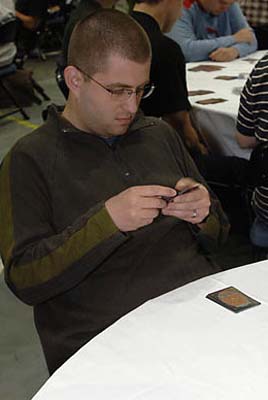 matchup features two distinctly different players. Maximilian Bracht of Germany has been playing for almost ten years now, but didn't get into tournaments until a few years ago. His first Pro Tour appearance was at Columbus, he joined the gravy train starting in London, and he's fresh off a Top 8 at Pro Tour-Honolulu.

Then there's Jakub Slemr. Jakub is a former World Champion, having taken the title down all the way back in 1997, around when Bracht was first learning how to play. Slemr would go on to make two more Top 8 appearances, which was enough to put him on the ballot for the first class of the Magic Hall of Fame. Jakub is here courtesy of a Sponsor's Exemption invitation, courtesy of Wizards of the Coast. A recent addition, these special invites are given out to celebrity players under special circumstances on a case-by-case basis. (The other player to receive one so far is David Williams.)

Jakub received his as a nod toward his historical performance, but more importantly, the Pro Tour was coming to this historic champion's home country for the first time, so Jakub got the invite and is very excited to be playing this weekend.

I spent some time catching up with Jakub, and he's still that exuberant guy he has always been. I was on a playtesting team with Jakub for years (back in the Moggsquad days with players like Zvi, Seth Burn, Brian Selden, Gary Wise, and several others), so on a more personal note it means a lot to me seeing him competing again, still wearing that wide smile he has always been known for. Jakub is doing well, has drafted the first two sets of the block extensively, and has managed to get in some practice drafts with Dissension too, so he's looking forward to the event. 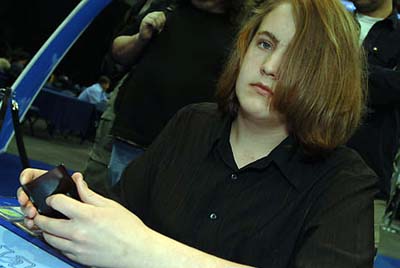 I watched his first draft, and from the start he was strongly in blue-white. All of his early picks were mono-colored and clearly the best cards in the pack, starting with Faith's Fetters, followed by Snapping Drake, multiple copies of Nightguard Patrol, and Conclave Equenaut. During Guildpact he continued on the blue-white path, picking up some black splash for cards like Ostiary Thrull and Shrieking Grotesque, and avoiding the disaster of temptation from powerful cards in off-color guilds. Dissension brought the Azorius payoff as several good fliers and spells made their way into the Czech player's pile. In the end Jakub had a solid beatdown deck with good fliers and some solid defense as well as a reasonable mana base thanks to his minimal black requirements.

When the time came to play Bracht, Jakub was first but it was his opponent that had the first play, with Simic Signet. Jakub thought a bit on this third turn, with access to

, and decided to go with a Drift of Phantasms. Bracht simply made mana #4 and said go, having

plus the Simic Signet available. Jakub followed up with Torch Drake and then Nightguard Patrol, which fell to a Sparksmith.

Even on the Sparksmith turn, Bracht had an additional five mana up, but just passed the turn. Clearly fearing a counterspell but probably taking a possible mana flood into account, Jakub continued developing his board, casting Shrieking Gargoyle with the black mana to force a discard. Bracht at last tapped most of his mana, using a Dismisser to send the Torch Drake back, but Jakub used the chance to slip an Ostiary Thrull into play in case the German player had indeed been sandbagging some kind of countermagic. 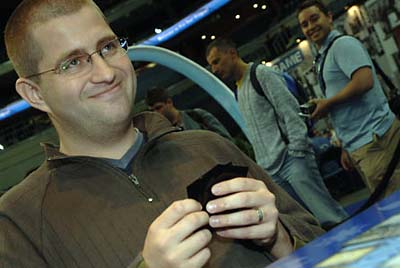 Jakub's smile was back on the Pro Tour.

Over the next few turns Jakub continued swinging in with a flier or two, while Bracht slowed but didn't stop the bleeding with more bounce like Ogre Savant. In one key turn Bracht managed to swing in around Jakub's wall and tapper, dropping the Czech to 17 and getting a bloodthirsty Skarrgan Skybreaker into play. It looked like Bracht might have pulled back into it, but Jakub stopped his other attackers with Riot Spikes on the Drift of Phantasms, making it so only the Skybreaker could get through without dying. It did so, once, but then got locked up by a recast Ostiary Thrull. Skybreaker blew up the defender and Bracht did the best he could with what was now clearly just a mana-heavy draw, but in the end Jakub's fliers were too much for the German to deal with. A couple more swings from Jakub's uncheched fliers and it was off to Game 2.

Jakub had a nice opening for this one as well, leading off with Drowned Rusalka, followed by Shrieking Grotesque. The gargoyle fell to a Perplex cast off a Signet, and Jakub smiled, opting to send his gargoyle to the dumper rather than his hand. Next came Nightguard Patrol, while the German used a Vedalken Plotter and then cast Recollect for the Perplex.

Jakub continued the simple beatdown, pulling out fliers and an Ostiary Thrull, while Bracht started making some plays that looked more like a possible constructed deck, first transmuting a Drift of Phantasms for a Lyzolda, the Blood Witch that threatened to dominate the board. But Jakub had a Castigate, putting the German back on his heels as the air force continued swinging in. Next came Izzet Chronarch for Recollect, but now Lyzolda was out of the game. Much like the first game, this stage of the battle featured Jakub casting and recasting his beaters while Bracht did his best to staunch the bleeding, stopping something each turn but often taking a couple points each turn to the fliers.

The crucial turn came after Jakub cast a Snapping Drake to the German player's fresh Izzet Guildmage. Bracht untapped and then spent quite a while thinking. After several minutes, he reached out his hand. Smiling as always, Jakub immediately went to shake it. Bracht pulled the hand back, laughing with a bit of an embarrassed smile. "No, sorry, I need to see your graveyard please." Jakub laughed and passed over the cards while Bracht put his plan together.

In the end, it turned out to be Rise/Fall. Bracht cast the Rise side, forking it several times with his Guildmage for all the mana he had available. When the smoke from the crazy combo had cleared, both Jakub's fliers were back in his hand while Plotter and Chronarch had rejoined Bracht's team from the dead.

Jakub recast Snapping Drake and Helium Squirter, which Bracht answered by saccing Chronarch to Fiery Conclusion and then forking it, sending both fliers to the bin. With just a gargoyle left in play on offense, Jakub still had gas, dropping out a Silkwing Scoutand a Conclave Equanaut.

Full of combo power but too far behind on life, Bracht checked his next card, thought for a moment, and smiled a bit. Reaching out his hand a second time, he said "This time I don't want to look at your graveyard."