While Osyp Lebedowicz held court for a crowd of spectators in the front of the feature match area, two of the game’s veterans sat at the side, shuffling up in quiet concentration. On one side was greybeard Osamu Fujita (now sporting an actual beard), who was part of the vanguard of Japan’s pro community, and who remains a Pro Tour fixture. Opposite him, wearing his standard Your Move Games finery, was Hall of Famer Rob Dougherty. He’s joined this weekend by five other Hallmates, including teammates Darwin Kastle and Dave Humpherys. Dougherty was piloting red-green aggro, while Fujita was playing the explosive Japanese Elf deck. 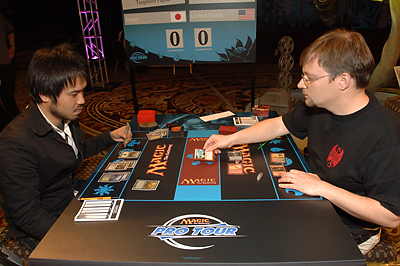 Osamu Fujita serves, but Rob Dougherty volleys.Fujita won the roll and opened with a Treetop Village, following up with a Wren’s Run Vanquisher, revealing Imperious Perfect waiting in the wings. Dougherty had Tattermunge Maniac and an Incinerate for the blocker off Mutavault. When Fujita spent his third turn playing Gaea’s Anthem, Dougherty played a second Mutavault and brought the beats, leaving Fujita at 14. He dropped a Fanatic and ended his turn.

Fujita untapped and threw down the Perfect and a Boreal Druid, both 3/3s. Unfortunately for him, Dougherty had a handful of gas. Shard Volley (sacrificing one Mutavault) and Tarfire off Grove of the Burnwillows cleared the path for 3 more damage. Fujita played his fifth land but had no spell to play.

Dougherty turned on his Mutavault and swung. Treetop Village stepped in front of the Maniac, leaving Fujita at 7. Tarfire after combat finished it off. Again, Fujita had no play. An attack and Shard Volley sent them to Game 2.

Fujita mulliganed and kept a one-land hand with two Elves. Unfortunately for him, Dougherty had a hand of three Mogg Fanatics. Boreal Druid fell first, then Llanowar Elves. On his third turn, he still only had one land, and put out a very lonely Heritage Druid.

Dougherty was also "stalled" on land at two, but that was more than enough to bring the pain against an immobilized Fujita. He followed up with Kavu Predator off Grove of the Burnwillows. Fujita sat there while Incinerate took out his lone critter and the Predator started growing. Mutavault came off the top for Fujita, but his Vanquisher was struck by a second Incinerate. The now 4/4 Predator and Fanatic put him to 14.

Fujita untapped, drew, and shrugged his shoulders. Dougherty having drawn no third land meant the life expectancy of his new Llanowar Elves was short. Tarfire off of Grove of the Burnwillows put it in the bin and helped Dougherty’s Predator hit 5/5. Fujita was nonplussed when land number three showed up the following turn. He dropped a Harbinger and searched up a Vanquisher to answer the Predator. It was clearly too little, too late. Dougherty had more burn to spare, and as soon as he decided on a line of play, Fujita scooped up his cards.

After the match, Dougherty joked about his choice of red-green aggro. "A few months ago, I had the time to test standard pretty seriously on Magic Online. Unfortunately, things went a little crazy all at once, what with the store, my game design company, running events, and three kids (with a fourth on the way). So I decided to play something I knew how to handle."

As far as technology goes, "Kavu Predator is so good, even with just the land (Grove of the Burnwillows) to power him up. There’s so much good life gain the format, between Kitchen Finks and Primal Command, and this guy preemptively solves those problems. Last round, Darwin [fellow YMG Hall of Famer Darwin Kastle] had him up to an 18/18. His opponent had a last-ditch effort to stop it, blocking with a huge swarm of guys, but Darwin had Shock for the Finks, taking out a blocker and boosting his Predator." Sad times for the opponent.

Unlike many red players this weekend, Dougherty is not running Magus of the Moon. "My first-round opponent showed me some sideboard cards he’d brought in for fear of the Magus, and I thought ‘Wow, that guy would be good against you.’ I think I’d want him in the sideboard, though. The deck is too focused on aggression."