Round 2: Raphael Levy vs Jeff Cunningham 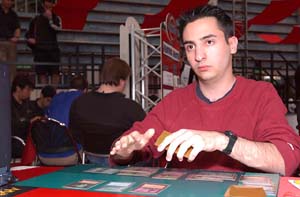 Raphael Levy has been one of the top French players for a while and is still in form with a Top 8 finish from GP Barcelona to his credit. Jeff Cunningham made Top 8 in Pro Tour San Diego and was part of the Magic Colony experiment for Pro Tour Osaka.

Cunningham has an aggressive red-black deck with a Stalking Bloodsucker to settle the mid to late game. Levy has a blue-black deck.

Levy won the die roll and elected to start.

Cunningham got going the quicker with a Barbarian Outcast on turn 2. Levy traded that off with his first play, a Hydromorph Guardian, only for Cunningham to follow it with a Mad Dog.

The Dog came through for damage as Levy chose to gain some card advantage with a Deep Analysis. A Gravegouger took away the option from Levy for flashing it back and Cunningham continued swinging with his dorks.

Knowing Cunningham's deck was probably the more aggressive Levy was happy to block the Gravegouger with a Soul Scourge.

Then it got interesting as both players dropped Whispering Shade.

The Mad Dog ran into a predictably messy end and Cunningham summoned a Wererat.

He was tapped out and this allowed Levy to cast a second Deep Analysis and drop a Psionic Gift on his Whispering Shade to remove the Canadian's. Levy's followed soon after as a Butcher from Cunningham took it from the game.

Levy was facing down a Wererat and Butcher with nothing so he flashed back one of the Analysis's and improved his side of the board with Painbringer and Crypt Creeper.

Cunningham wasn't about to stop turning his men sideways as a Shades Form made the Butcher a must-block. The Creeper obligingly took it for the team.

Then Levy was able to untap and ponder a problem. The extra cards from the Analysis's had given him plenty of options and a Dreamwinder and a second Whispering shade provided good new recruits.

A Volcanic Spray from Cunningham left Levy with more to think about. Painbringer took the Wererat down with it and Cunningham flashed back the Spray to finish off Levy's Shade.

Still needing more options Levy flashed back the second Deep Analysis, leaving himself at 3 life. That 3 life looked fragile as a Peek revealed Cunningham was holding a Screams of the Damned and Unhinge. Caustic Tar didn't look like it would be quick enough as the Dreamwinder was forced to chump the Butcher and the Screams appeared on Cunningham's side.

Morbid Hunger got rid of the Shades form on the Butcher and bought Levy some valuable extra life.

Gravedigger proved to be a timely draw for Cunningham as he was able to dig back the Gravegouger and steal the Hunger out of Levy's graveyard. More importantly it gave Cunningham a creature to sacrifice to the Innocent Blood cast next turn. Without it the Frenchman might have been able kill the Butcher, get back his Shade and steal the game.

"Gravedigger was the best draw," Levy said, shaking his head. 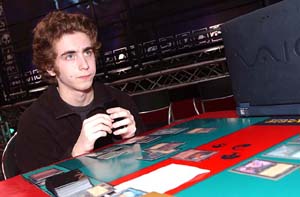 Cunningham had another zippy start as Filthy Cur came in on turn 2. A Peek revealed the curve was there and sure enough Cunningham dropped Gravegouger and then Wererat.

Innocent Blood took care of the Cur and a Dreamwinder put a halt on any attacking.

Cunningham summoned a second Cur and cast Unhinge, tapping out and giving Levy an opportunity to Morbid Hunger the Wererat.

The Canadian's draw petered out badly as he started doing nothing but lay land.

Levy tried to take full advantage casting Deep Analyisis and then going aggro with a Crypt Creeper, Whispering Shade and even the Dreamwinder.

Cunningham wasn't done as his deck finally gave him a creature, and a damn good one at that, as he tapped six mana and a Stalking Bloodsucker swooped in.

Cunningham finally had a use for all his extra land as three got pitched to the Vampire and it took a massive 10 point bite out of Levy's life total.

Not enough and too late. Levy checked the life totals and his number of swamps carefully before calculating it was enough for the Shade to reduce Cunningham to 0 with the help of a Psionic Gifted Dreamwinder.

Cunningham repeated game 2 with a turn 2 Filthy Cur. He followed it with a threatening looking Ember Beast. 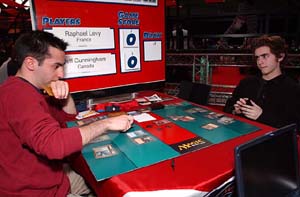 Levy couldn't remove the Cur directly and had to look to a Skywing Aven to block it. Cunningham had a back up creature in the form of a Wererat to ensure the Ember Beast would keep coming. Then a Cabal Torturer appeared after it to neutralise Levy's Skywing Aven.

Problems for the Frenchman, already short of half his life. A Hydromorph Guardian was not really the answer he needed.

Cunningham halved Levy's life total again with another attack and then summoned another Filthy Cur to maintain the pressure.

A fifth land appeared to enable Levy to summon a Grotesque Hybrid. Not enough as Cunningham swung with all his men and then showed the Fiery Temper in his hand.