Round 2: Righteous Babe vs. Game Empire 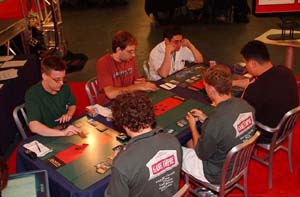 "Why aren't you wearing the team shirt?" -- Mike Flores
"They didn't have one for me. I'm just a lackey." -- Terry Tsang

As the teams sat down to exchange insults it was clear that there would be two wars being fought this round: One for the match win and one for pride.

Tsang had to mulligan and his initial assault was thwarted by the dynamic duo of Coalition Honor Guard and Stormscape Apprentice. It was doubly bad for Game Empire, since Alan Comer was stuck at three lands and put off his game by Rushing River and Repulse from John Shuler.

In the middle, Brian Kowal mulliganed and Brian Selden went one better, going to five. Dead Ringers undid Selden's early plays, and Kowal ran a Kavu Climber into a Sea Snidd, clearing the board. Next door, Mike Flores ran his Disciple of Kangee into a Hooded Kavu he had held back with Manacles of Decay. When Tsang announced the block, Flores declared "I'm awful.", to which Kowal replied "I don't want to hear things like that."

Flores's Stormscape Apprentice started working overtime as it had to protect his all-white board from Crypt Angel and Shivan Zombie. Down the line, Comer had just folded game one when Shuler revealed Reckless Spite to set him even further back. Kowal added to Game Empire's hurt, having brought Callous Giant and a 5/6 Emblazoned Golem.

Flores's situation worsened. As the pro-white beats knocked him to five, he lamented his throwing away the Disciple of Kangee, saying, "The whole game was that Disciple! If I had it, it would just be two, two, two, two, two, two, dead!". As he dealt the killing blow, Tsang said "Mike Flores never fails to disappoint me.".

In game two it was Shuler's turn to fall to mana troubles. He was without blue mana, but was never all the way out until the last turn, holding two Repulses and two Excludes. Sky Weaver was not island, and he packed it in.

Even though the game was his, Comer had flubbed a couple of times. He turned to Selden, saying "Sorry for the bonehead play.". Selden shrugged it off, saying "Hey, sorry for the double-mulligan"

Flores got on the wrong side of things after an impressive start. His Crimson Acolyte met Exotic Curse. He responded by floating a white, then putting his Acolyte into the graveyard. He turned back to see that he'd forgotten to give one of his creatures pro-red, and exclaimed "I'm a jackass!". Tsang did not disagree.

Things went downhill in a hurry. The way was clear for a Tsang Plague Spores that took Flores's only white mana. Then came Smoldering Tar, Scorching Lava and Terminate, putting Flores out of his misery.

Dan Bock wandered into the gallery and was bemused at who he saw fighting it out below. "The real question", he said "is how these guys managed to get into the Tour."

Bock smiled. "Ah, got in under the bootstrap program."

Selden was on the defensive in his game two. He blunted Kowal's attack and started to stabilize behind Stalking Assassin. Kowal went for the gusto with a kicked Magma Burst only to watch as Selden used his one free white to save his team with Pollen Remedy. From there, Kowal's deck decided he needed more land, and without the proper tools, he lost the game.

In the deciding game of the Shuler-Comer match things were pretty much in Shuler's favor. He had quick drops ready to swarm for the win. All of a sudden, Natural Emergence bounced Fertile Ground, giving Comer a whole new army to work with and forcing Shuler to hold back.

Next turn things got really nutty as a forest put on a brand new Armadillo Cloak. Shuler was in huge trouble. For two turns he was unable to find an answer despite the many bounce and kill spells in his deck, and both players slowed their pace to figure out all the angles.

Kowal mulliganed in his deciding game against Selden, and had to keep a hand of five lands and Nomadic Elf. He was kept off green mana by Selden's Dream Thrush, and a Hunting Drake kept the Elf off the board permanently. Kowal made Callous Giant, but it met a Death Bomb while Selden attacked in the air.

Kowal's draw turned up even more land and for a moment it seemed like his Soul Burn might be able to steal the game. Unfortunately, Selden had ample pressure and took the game. Comer took his game, too, making it a sweep for Game Empire. Shuler could only draw creatures, not the bounce he needed to make a game of it.