Round 2: Sextuple Grapeshot or Double Gifts?

Hall of Famer Frank Karsten certainly needs no introduction, but his reason for being in Philadelphia probably does. He had not planned to attend the Pro Tour when it was scheduled to be Extended, but changed his mind as soon as the announcement was made that the format had been changed to Modern.

"It seemed like a deck builder's paradise, and I figured there might be some opportunity to break it," Karsten said.

To almost no one's surprise, Karsten brought his trusty Gifts Ungiven to the table, alongside Pyromancer Ascension, in a blue-red combo deck unlike many of the other Izzet-colored combo decks in the room. That attraction? 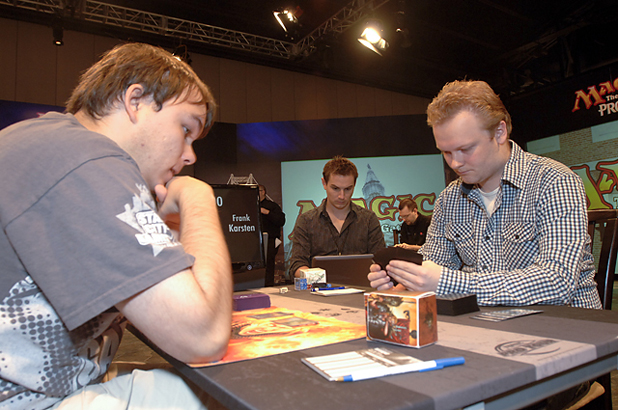 Gaudenis Vidugiris and Frank Karsten: both great players, both blue-red, but with very different pedigrees.

A very different Steam Vents deck sat across from the Dutch player in Round 2 as Gaudenis Vidugiris was sporting some Pyromancer tech of his own in Pyromancer's Swath, once part of the briefly popular "Aussie Storm" deck. Vidugiris didn't quite have the pedigree of Karsten—few do!—but he is coming off a Top 8 performance at the last Pro Tour in Nagoya and has multiple Grand Prix titles to his name.

Both players kept for the first game, which should have clued everyone watching in that it could be over quickly.

Vidugiris, on the play, broke a Scalding Tarn for an Island, casting Serum Visions. He left one card on top, which signaled a pretty strong position for the Grand Prix Denver champion. That position was confirmed when Karsten paid 2 life to cast Gitaxian Probe, revealing two Rite of Flame, two Desperate Ritual, and Pyromancer's Swath.

All Gaudenis needed was a Grapeshot to win on turn two, considering Karsten had paid 2 life for Gitaxian Probe and 1 more to use Scalding Tarn to find an Island.

Karsten used Noxious Revival to put Scalding Tarn on the top of Vidugiris' deck—yes, it can do that—giving him one blank draw and slowing down the Swath long enough that the Remand in his hand might matter. Vidugiris simply played a tapped Steam Vents and passed back. 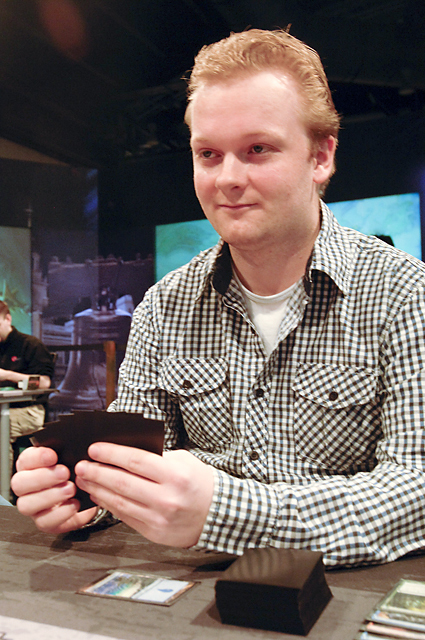 Sometimes it takes a Hall of Famer to point out what Noxious Revival can really do.

Unfortunately, with little other action, the Hall of Famer tapped out for Pyromancer Ascension. That was all the window Vidugiris needed, as the top card was indeed the Grapeshot he needed for the kill.

Karsten mulled to six on the play and led with Island and Preordain, keeping one spell on top. Vidugiris matched with his one blue cantrip on a Ponder and elected not to shuffle. Could he have another turn-two win waiting in the wings?

Another Gitaxian Probe revealed a hand full of Rituals, Grapeshot, and Pyromancer's Swath. Depending on the top of his deck, it could be yet another potential turn-two kill. Karsten simply played a land and passed back with Remand at the ready.

Vidugiris, mindful of Karsten's untapped mana, was content to play a Steam Vents tapped and pass.

A Ponder from the Dutch player led to a shuffle and a Manamorphose in hand, which would be necessary to cast the Remand after he passed with only Mountain and Grove of the Burnwillows up.

Vidugiris played Shivan Reef and tapped out to cast Seething Song, which Karsten let resolve. A second Seething Song gave Karsten pause as he did the math on what choke points he could fight over this turn. He let the second resolve as well, giving Vidugiris seven red mana and a storm count of two.

Vidugiris then used three of those to cast Pyromancer's Swath, Manamorphose, and a Desperate Ritual, all of which resolved. Finally, as the sixth spell of the turn, he went for the kill with a Grapeshot for 18, exactly Karsten's life total. 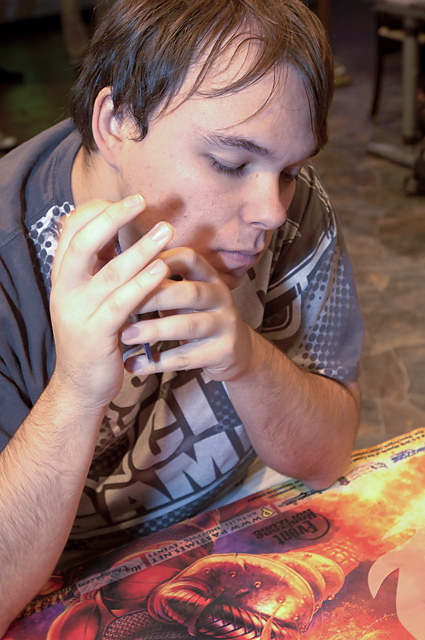 If you listen closely, you can hear the sound of grapeshot.

Karsten, however, used Remand to counter one of the copies. All told, Karsten took 15 damage, but was very much still alive at 3 life. Thanks to the Swath, Vidugiris discarded his hand, but only a single copy of Grapeshot, or any other burn spell, off the top would be enough to win.

Karsten went to work after surviving the turn, casting Ponders for two turns while Vidugiris drew blanks and discarded them to Swath's trigger.

Noxious Revival brought back a Ponder, which still failed to find Karsten the action he needed to complete one of his combos. Instead, he settled with using another Revival to Time Walk Vidugiris again.

A flurry of Preordains, Gitaxian Probes, and a Remand followed until Karsten finally found a Gifts Ungiven. Running through the scenarios in his head, he decided he needed one more turn, so he passed back to what would likely be Vidugiris's final turn.

4 Grove of the Burnwillows 1 Firespout
75 Cards