Round 2: Steve O'Mahoney-Schwartz vs. Patrick Mello 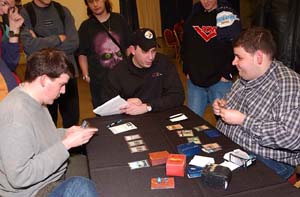 Steve O wasn't originally slated to be in this event, but after sweeping through the six rounds of the Gateway tournament, he had secured himself a seat and $2000. A first-round thrashing of reigning World Champion Tom van de Logt earned Steve a few more thousand dollars and a shot at Patrick Mello.

Mello had no easy road to round two either - he had to defeat his teammate and consensus "world's best player" Kai Budde in an exact mirror match.

Steve O's deck is a slightly abnormal red/green concoction reminiscent of the Invasion block deck that ABU stormed Pro Tour - Tokyo with: Raging Kavu, Kavu Titan, and Skizzik make up the bulk of his attack force. Call of the Herd and Spellbane Centaur are the deck's Odyssey entries, but Wild Mongrel is conspicuously absent.

Mello is running a variant of the breakout Psychatog deck - tons of removal, counters, and card-drawing with only four atogs as damage sources. Mello and Kai did not play Shadowmage Infiltrators, citing the card's vulnerability to Flametongue Kavu and Urza's Rage.

As they shuffled, Mello, playing in his first Masters event, seemed edgy. "Right through the Gateway?" asked the German.

"Right through the Gateway," echoed OMS, "The only thing I changed about the deck were the sleeves."

OMS won the roll, and Mello was forced to mulligan a no-land draw. He eventually settled on a six-card hand that contained only an Island for real estate.

Mello was fortunate to draw to consecutive lands at the start of the match, allowing him to Force Spike Steve's Spellbane Centaur and then Undermine and subsequently Memory LapseCall of the Herd. (Flashed-back spells are removed from the game when Lapsed.) OMS became visibly disturbed when his last business spell, Skizzik, was Counterspelled.

Eventually OMS squeezed a few points through with a Raging Kavu, but Mello calmly Repulsed it and the Recoiled it, buying himself time and methodically filling up his graveyard until Psychatog could safely be cast.

Mello eventually cast the Atog with a deep graveyard and a moderate hand size. Steve O replayed his Raging Kavu and stopped to think...

Spectators came and went, paint dried, and grass grew. Mello took his bottle of Coke from his bag, took a long swig, and treated himself to a piece of candy. Steve kept on thinking.

Eventually Steve solved the world's problems and decided to attack. Not surprisingly, Mello blocked and the Atog ate up some of the graveyard, killing the Kavu. Steve continued to try and cast creatures. One Undermine and two Force Spikes later, the Atog came across the table for one lethal attack.

OMS sided in three Terminates and a pair of Dodecapods, and Mello brought in creature control in the form of three Innocent Bloods, two Ghastly Demises, and two Engineered Plagues.

Steve OMS started off a little slowly in game 2, doing nothing until his turn-3 Call. Mello had the answer in the form of Innocent Blood. The crowd was stunned.

Steve played a fresh Call on his next turn, but Mello had another Blood. He had not, however, played a third land, and was visibly irked.

Steve flashed a Call back, and Mello had a new answer this time - Ghastly Demise.

Bob Maher: "You were sweeping up draft commons, weren't you?"

The levity of the situation quickly dissipated when Mello continued missing land drops and was forced to discard Undermine - two turns in a row. OMS's fourth attempt at an elephant token was a success, and he followed it up with a Raging Kavu. Mello had no chance without land, and it was on to game 3.

Mello kept a two-land hand for the final game, but Steve's contained only one. Like a true professional, however, Steve drew two more right off the top.

Steve's two Llanowar Elves fell victim to Innocent Blood, and his Raging Kavu only got in one hit before it contracted an Engineered Plague.

Steve then started in with the Elephants. When Steve cast his first Call, Bob Maher let out a loud trumpeting squeal, eerily akin to the cry of an actual elephant. Mello was only slightly amused, and cast his third Innocent Blood.

On the next turn, Steve busted out a fresh Call, Maher trumpeted again, and Mello Ghastly Demised the token. On his turn, the German summoned his Atog.

OMS flashed the second Call back, and Mello answered it with a second Atog. The game was deadlocked.

OMS drew a second Raging Kavu and cast it, but - Oops! - Engineered Plague was still in play. Steve blushed at his error, eliciting a chuckle from Mello. Pikula was quick to Steve's defense: "He's tired! He had to play in the Gateway!"

Pikula aside, Steve's deck also leapt to his defense, coughing up another Call. (Steve's brother Dan, chimed in with the elephant trumpet when Maher claimed to be worn out.)

Mello had another piece of candy and asked his deck to cough up a non-existent Hibernation.

Steve flashed back his Call, giving him three tokens. Mello answered with his third Psychatog. Amazingly, OMS drew his fourth call, and cast it twice over the next two turns, exhausting his supply of Player Rewards token cards. Mello drew and played his fourth Psychatog.

To recap: Neither player was a third of the way through his deck, yet all four of Steve O's Call of the Herds had been cast twice, and all four of Mello's Psychatogs - all the creatures in his deck - were in play.

"That's not the way it should work," commented Mello on the game state.

Steve resolved a kicked Kavu Titan (4/4 thanks to Plague), but Mello's full graveyard was allowing his four 1/2's to hold off Steve's 19 power worth of monsters.

Things began to fall apart for Mello when OMS was allowed to resolve a kicked Skizzik. Mello may have drawn all his atogs, but he had drawn precious little elimination or countermagic since the game's early turns.

Selective attacking combined with cagey use of his Keldon Necropolis allowed OMS to whittle away first at Mello's graveyard, and then at the Psychatogs themselves. Mello continued to draw only land.

Finally with only one Atog left, Mello attacked. It was obvious to Steve that the German had drawn Fact or Fiction, which meant that if the Atog went unblocked, the extra card advantage would be enough to kill Steve. He chose to block with his remaining four Elephants.

Mello went for anyway, hoping to kill most of OMS's army. With Fact or Fiction on the stack and Mello tapped out, OMS windmill slammed his trump card - Terminate - and the crowd went wild.

Mello dejectedly flipped over his five cards - all good spells - but with no way left to win the game, he extended the hand.