Professional giggler and Super Best Mage Luis Scott-Vargas could not deny the power of Tempered Steel this weekend. After exhaustive testing, nothing his team threw at the deck could put up the same numbers. With a heavy heart, he shuffled up some beaters.

This round he faced Hall of Famer and game designer Rob Dougherty, who is also playing Plains this weekend, but took them in another direction. Dougherty's deck features Puresteel Paladin, cheap Equipment, and Indomitable Archangel and Kemba, Kha Regent as big finishers.

Dougherty kept his starting seven. Scott-Vargas went to six. He made an Origin Spellbomb, but could only watch as Dougherty started with Puresteel Paladin, then a second on turn three, turning his Accorder's Shield into a zero-mana Divination. Dougherty also played Mox Opal, then animated his Nexus just to hit metalcraft and give the shield to a Paladin. Scott-Vargas cracked his Spellbomb, then untapped. 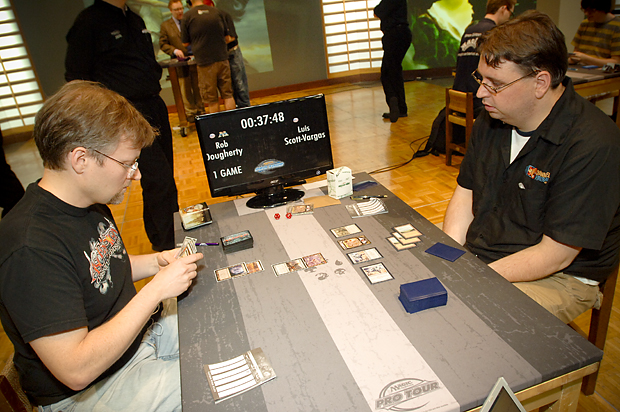 He played a second Nexus, tapping out for Glint Hawk Idol and Signal Pest. Dougherty considered his options. He sent in his Paladins, dropping Scott-Vargas to 14, then played a postcombat Indomitable Archangel. Scott-Vargas made a Blade Splicer and passed back.

The Puresteel Show continued, this time a double-cantrip off Sylvok Lifestaff, and then another Paladin and three cards for a Darksteel Axe. When Rob tapped his last mana for Mortarpod, LSV had seen enough.

This time it was Dougherty's turn to go down to six. Scott-Vargas started with Plains and Memnite, but had no play to go with his Second plains. Dougherty tapped two for Mortarpod. He declined to trade Germ token for Memnite. Scott-Vargas spilled out Blade Splicer and a second Memnite. Dougherty spent his third turn giving the Germ a Sylvok Lifestaff. 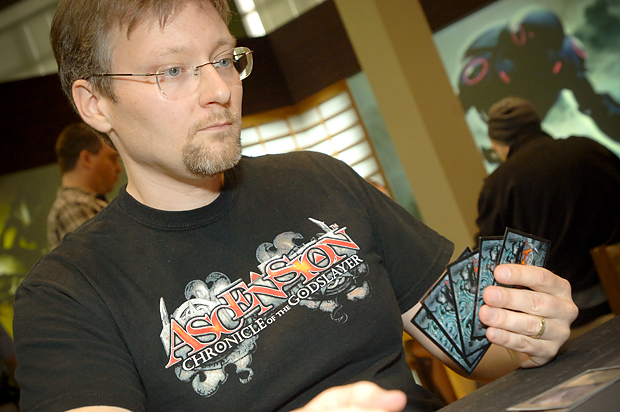 Dougherty is a tournament organizer as well as a player, and runs the TCGPlayer.com tournament series.

Scott-Vargas's team crashed in. The heroic Germ stood in front of the Golem token and shot a Memnite, netting Dougherty a life in the process. Unfortunately for him, Scott-Vargas's next play was Hero of Bladehold, and Dougherty did not have a ready answer. He made a Flayer Husk and gave the Germ all the other Equipment. This time, the chump and shoot was less exciting, leaving him at 12 and still needing to answer the Hero. His draw step yielded nothing, and they were on to Game 3.

"Some close games so far," said Scott-Vargas with a laugh.

"Oh yes. I don't know if we're going to be okay on time," replied Dougherty.

Dougherty started things off right, with Accorder's Shield and Glint Hawk on the first turn, then Puresteel Paladin and the same Shield for a cantrip. Scott-Vargas played a Glint Hawk Idol and fell to fourteen. Dougherty added Kemba, Kha Regent to his squad. Scott-Vargas dropped Blade Splicer, and his Idol got in for 2 damage, adding a Mox Opal before passing it back.

Dougherty played his fourth plains and surveyed the board. He decided to send only the Glint Hawk, then tapped four for Indomitable Archangel. Scott-Vargas had Dispatch at the ready. Scott-Vargas upped the ante with Hero of Bladehold. Dougherty tried a Flayer Husk, but Scott-Vargas had a second Dispatch to kick Puresteel Paladin off the table, denying him a draw. His remaining three mana gave the Shield to Kemba. 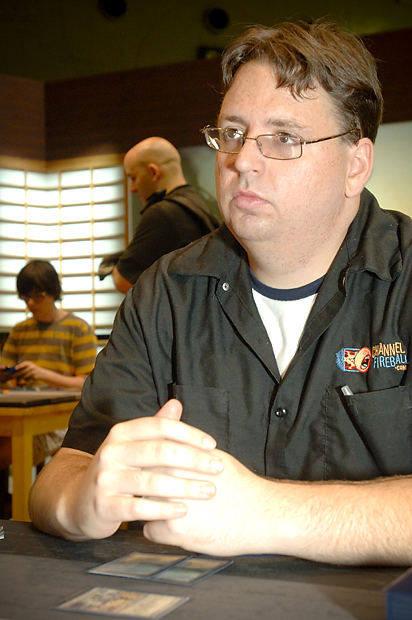 Scott-Vargas untapped and, as expected, animated his Idol and sent the whole gang. Dougherty considered his options. Kemba and Glint Hawk teamed up on the Hero, and the Flayer Husked Germ dove in front of the Golem. Dougherty fell to 9. He untapped, got a cat from Kemba, and played Indomitable Archangel.

Scott-Vargas swung again. Dougherty pushed the cat token and Kemba in front of a golem, forgetting about the Blade Splicers' giving first strike. The Angel stopped the second golem. he took six and fell to three. Scott-Vargas had a second Idol, and his attack on the following turn was lethal.

4 Kemba, Kha Regent 1 Sword of Body and Mind 1 Sword of Feast and Famine 1 Sword of War and Peace 1 Mirran Crusader