Round 2: Svend Geertsen vs. Oyvind Odegaard 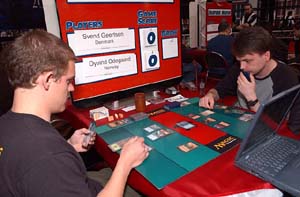 Svend Geertsen of Denmark used to be one of the very best, but his studies at university have limited the time he can devote to Magic, so now he only attends limited PT's. His opponent, Norway's Oyvind Odegaard, was a member of last years Worlds Team runner-up, and has been enjoying a decent level of success since.

The two were seated across from each other during the draft, so they were not aware of what each other was playing. Svend lucked out and got a good blue/green deck, and Odegaard ended up with black/white.

Oyvind drew a creatureless opening hand of five land, Ghastly Demise, and Second Thoughts, but he managed to find and cast a Mystic Zealot before Svend could get any damage through with his Twigwalker and Springing Tiger. When Oyvind said "go" at five mana, Svend coughed and said, "I smell Second Thoughts." Oyvind played along.

Oyvind added a Soul Scourge and Kirtar's Desired Svend's Tiger. Svend made the tough decision to Ghostly Wings his enchanted Tiger, turning it into a 4/4 flying wall. Oyvind raised his eyebrows.

The Norwegian had been drawing a steady stream of creatures, though, and added a Cabal Torturer and a Frightcrawler, which could break the stalemate.

Svend had his own ideas, sending in a Krosan Archer and a Cephalid Aristocrat with Twigwalker backup. Oyvind blocked the Archer with his Zealot, trading it for the Twigwalker. 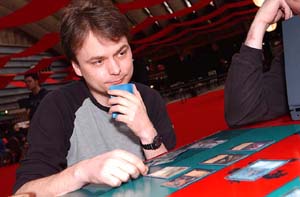 Svend attacked again with the Aristocrat; Oyvind tried to Second Thoughts it, but Svend had Rites of Refusal, so Oyvind was reduced to using his Torturer to prevent one point of damage. The "milling" effect of the Aristocrat, however, had given Svend threshold, so he discarded a card to Ghostly Wings, returning his Tiger and recasting it as a 5/5.

The next turn was a big train wreck of creatures dying – Svend attacked with most of his forces, and Oyvind used good blocking, the Cabal Torturer, and a Ghastly Demise on the Tiger to wipe out most of the Dane's relevant monsters. He slowly took control of the board with a Whispering Shade and an Aven Cloudchaser as the Frightcrawler attacked for one per turn... 15... 14... 13...12...

Oyvind eventually reached threshold himself by sacrificing a Pilgrim at the en of Svend's turn, making his Torturer's –2/-2 ability active and pumping the Frightcrawler to 3/3. The Torturer whacked Svend's Leaf Dancer, then the Frightcrawler brought him to 9.
But by this time, Svend had regrouped with a Wild Mongrel and an Aven Windreader. A Churning Eddy on Oyvind's Shade and his own Forest (for Mongrel food) allowed him to attack Oyvind to one.

But one is not zero, and Svend's peeks with the Windreader showed nothing but hits on the top of Oyvind's library – Morgue Theft and Teroh's Faithful. The extra cards and extra life proved vital, and after the Frightcrawler traded with the Mongrel, the Shade went onto the offensive and Svend couldn't stop it.

After the game, Mark Rosewater let the players know that they only had 18 minutes left, so the two shuffled quickly.

Oyvind played a turn two Frightcrawler, and Svend dropped a Leaf Dancer. When Oyvind chose not to attack, Svend correctly predicted that he had Gallantry.

"I have it all," replied the Norwegian. 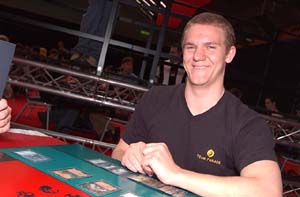 Svend made the smart play of casting Churning Eddy before attacking, setting Oyvind's Gallantry plan back two turns. On his next turn he played an Aristocrat, and then Centaur Chieftain the turn after. Sylvan Might saw to it that the Aristocrat busted through Oyvind's Blessed Orator. A continuous supply of large creatures from Svend prevented Oyvind from ever regaining his footing.

Oyvind stopped at two land, whereas Svend ramped up to four right away via Diligent Farmhand and cast a Springing Tiger, then a Werebear, then a Scrivener. Odegaard never even got started, and was run over in a few quick turns. He did make a point to play at a reasonable pace, even when his death was imminent, and Svend won just as time ran out.