Round 2: Tadayoshi Komiya vs. Fumihito Arakuni 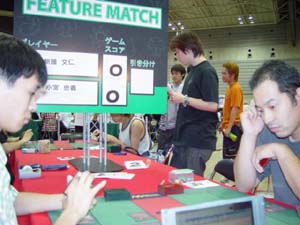 It's strange to see a former National Champion playing in the second round of a Grand Prix. After all, the mighty usually stay that way, holding onto their three byes with an iron grip. Well, Komiya took a bit of an enforced break from the game, after he was hired by Hobby Japan and therefore unable to compete in sanctioned events. He's back now, and looking to pick up where he left off. Today he is playing Goblins. His opponent is Fumihito Arakuni, who is more than a little intimidated to be playing a champ so early. Arakuni is with Goblin Bidding.

Arakuni looked at his first seven cards and grimaced. Two mountains, two swamps, two Warchiefs and a Clickslither. He was playing first, and decided to keep. Komiya was much less hesitant to hold onto his starting hand, a solid mix of goblins. Komiya was first on the board with Skirk Prospector, quickly joined by a twin and a Goblin Sledder. Arakuni finally got to Warchief mana and swung in for two. Komiya returned fire and then cycled an Incinerator on the Warchief, playing out another Sledder.

Arakuni was firmly on the back foot. He played a Sledder and Piledriver and stayed home. Komiya served again, and Arakuni ate four, falling to twelve. He played a Goblin Warchief post-combat, having saved his mana for the threat of Goblin Burrows. Arakuni untapped and then tapped four for Clickslither, charging in for seven. Komiya took it without batting an eye. He double-checked Arakuni's life total, then dropped a Goblin Goon, swinging in for exactly twelve damage.

Arakuni again stared at a less-than-gangbusters opener of four land, Prospector, Smother and Sharpshooter. He kept. Komiya's grip of two Incinerators and a Clickslither needed no help. They matched opening Prospectors who waltzed past each other for damage. Arakuni dropped a Sharpshooter on the third turn and Komiya promptly Incinerated it. Again they traded Prospector hits, but this time with no action.

Komiya brought the beats on his fourth turn with a Clickslither. Arakuni considered Smothering the Prospector in response, but decided against it. He took the damage. On his turn he drew another blank and Smothered the Prospector, hoping Komiya was out of gas. His Prospector and fresh Sledder stayed home.

Komiya's Temple of the False God was right on time, enabling a fifth-turn Rorix and considerable pain for Arakuni. He hoped to cycle Incinerator into a second one, but it was not to be, and Komiya brawled through for the win.