Round 2: Takanori Matsuzaki vs. Chikara Hayashi 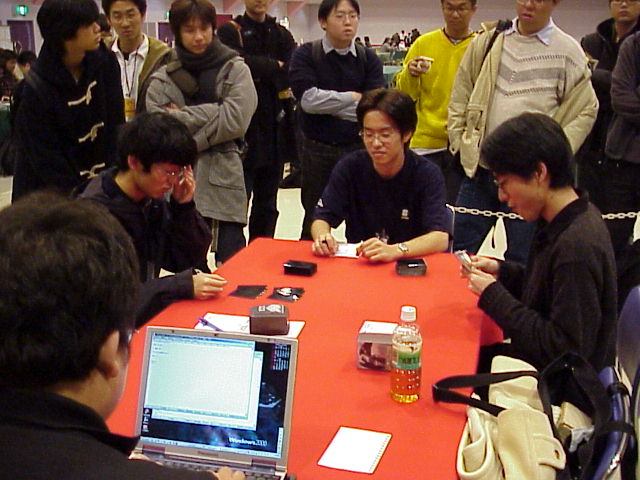 Chikara Hayashi's single bye belies his talents. A writer for the Japanese Sideboard and well-known deckbuilder, Hayashi has plenty of people in his corner. Matsuzaki had to fight this one without a cheering section, as he is still an up-and-comer.

The early game was slow. A Wasteland from Matsuzaki forced a Tithe from Hayashi. Hayashi fetched Scrubland, and used it to fuel a Duress. Matsuzaki's hand was short on gas, left with just a Vindicate and Treetop Village after losing his Pernicious Deed.

However, he ripped like a champ. Gerrard's Verdict caught Force of Will and Call of the Herd. Spiritmonger was waiting in the wings. Hayashi's only response was a Meddling Mage blotting out River Boa. Here, Matsuzaki's inexperience showed. Despite Hayashi's clearly needing his lands, Matsuzaki blew his Vindicate on the Mage.

Now the tide seemed to turn in Hayashi's favor. A second Duress revealed the Spiritmonger threat, and a second Mage kept it from entering play. Matsuzaki effortlessly pulled Swords to Plowshares from his deck. Next turn he found a Duress to strip Hayashi of his Plow, and had enough left over to drop the 'Monger. 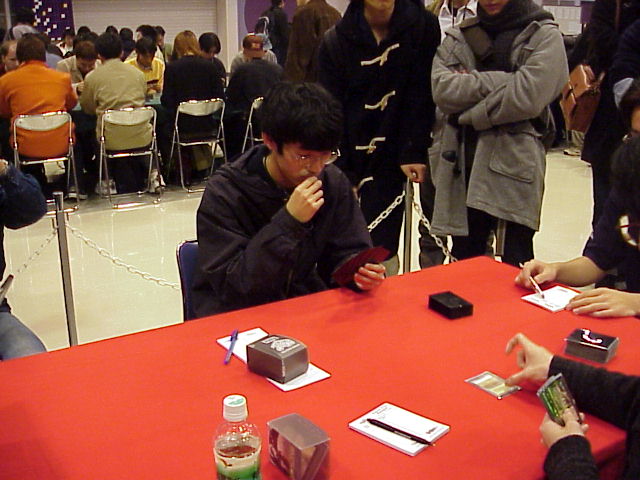 Hayashi's remaining hand of Brainstorm and Masticore was not so mighty. He Brainstormed into a Shadowmage Infiltrator. Combined with the Masticore in hand, they conspired to keep the Spiritmonger at bay until an answer could be found. Surprisingly, Matsuzaki was willing to swing, despite his near-empty hand, letting his opponent dig faster.

However, fortune was on his side. Leading with Duress to strip Call of the Herd and leave Hayashi with a hand of Force of Will and a second Masticore, he displayed the Vindicate he'd just pulled. Surprisingly, he chose to hit the Masticore over the Infiltrator, hoping for a quick win.

Hayashi played his second Masticore. Matsuzaki was not to be denied. Pernicious Deed was waiting for him. Hayashi Brainstormed into Counterspell. Finally, Matsuzaki was willing to hold the Spiritmonger on defense. For many turns, neither blinked. Hayashi drew Plow, but Matsuzaki had draw practically one hundred cards, and was able to win with ease.

Hayashi kicked off Game 2, and matched Matsuzaki's River Boa with an elephant token. Matsuzaki went for the throat with Choke. Hayashi smiled as he played out Seal of Cleansing. Still, he would have to fight through a lot from Matsuzaki. 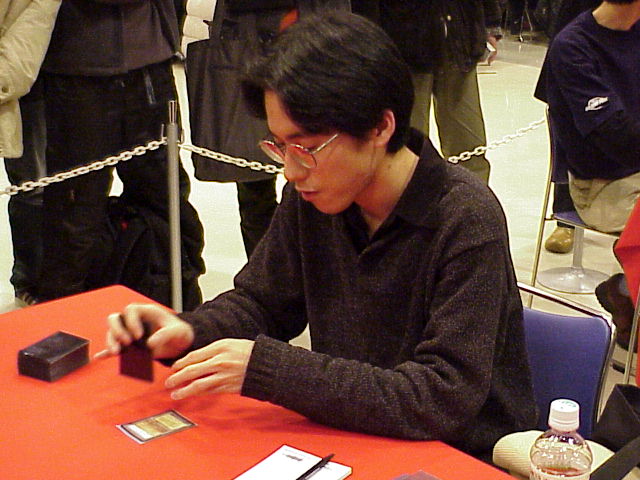 Matsuzaki blew up the token with Pernicious Deed, and tried to swarm the board. His Spectral Lynx was countered. His second Boa made it into play only long enough to get Perished. He had Call of the Herd to press for damage. Hayashi flashed his back to stem the bleeding.

Brainstorm, Tithe, Brainstorm didn't give Hayashi the goods. His Infiltrator met with Vindicate. Spectral Lynx compounded his difficulties. Duress took Pernicious Deed. Perish stopped the elephant. Matsuzaki's only card was Gerrard's Verdict, stripping Hayashi's hand, but not before he played Diabolic Edict for an empty board.

Hayashi topdecked land. Matsuzaki topdecked Call of the Herd. Hayashi's Shadowmage Infiltrator might have kept him in it, if not for Matsuzaki's very lucky Swords to Plowshares. Game and match to Matsuzaki.

4 Duress 4 Call of the Herd

4 Force of Will 2 Misdirection
54 Cards