Round 2: Tarou Kageyama vs. Takayuki Kawahara 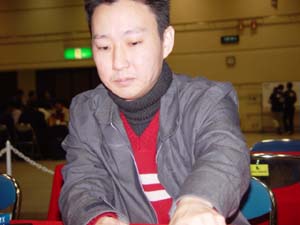 This round saw Japan's favorite hard-luck player, Tarou "John" Kageyama, square off against newcomer Takayuki Kawahara. Kawahara is running what looks like Kai Budde's "Randomized Malka" deck from Grand Prix – Reims. Kageyama is playing something a little stranger. Designed by none other than Itaru Ishida, his deck is green-black-white Oath of Lifegain. In addition to saner Oath targets like Ravenous Baloth and Visara the Dreadful, Kageyama's deck boasts Ancestor's Chosen for a big life boost. It can even Rector out Test of Endurance. Ishida rejected the deck as "too crazy", but that only made Kageyama like it more.

Kageyama led with Llanowar Wastes, but had to wait on Cabal Therapy for a sign as to what deck his opponent was playing. Kawahara obliged by showing Llanowar Wastes and Birds of Paradise. Kageyama aimed for Spiritmonger. He saw instead a pair of Pernicious Deeds, along with other goodies. Kawahara played another Birds of Paradise and fired back a Duress of his own. His look of puzzlement drew laughs from the crowd. Kageyama's hand was Academy Rector, Overgrown Estate, Visara the Dreadful and Pernicious Deed. Naturally Kawahara took the Deed.

Kageyama played his third land and waited. Kawahara had free reign. Instead of busting out a Deed, he chose to get his Genesis online, after using Bloodstained Mire to fetch a mountain. This gave Kageyama a huge opening. He untapped, dropped his fourth land and Academy Rector, then sacrificed it to flash back Cabal Therapy. Not only did he strip Kawahara's Deeds, he got Oath of Druids on the table.

Kawahara was forced to Deed away the Oath before things got crazy, and then Kageyama had Dust Bowl to pin down his lands and a 6/5 swinging freely. Kawahara couldn't keep up. Itaru Ishida watched from the sidelines, shaking his head very slowly.

Kawahara led with swamp, and played Vampiric Tutor in response to Kageyama's Cabal Therapy. Kageyama looked for Pernicious Deed, but saw only lands, another Tutor, and Wall of Blossoms. It turned out Kawahara had gone for a Therapy of his own. He tried for Oaths, but missed. Kageyama came down with Volrath's Stronghold, and Kawahara took the time to flashback his Cabal Therapy through his Wall, stealing the Academy Rector.

Kageyama smiled as he plucked Oath of Druids. This forced Kawahara to Tutor during his upkeep for Pernicious Deed and drop it into play. Kageyama kept the pressure up with Ravenous Baloth. He was given a gift when Kawahara forgot to activate the Oath. He had Treetop Village, though, and for a few turns they traded hits, each unwilling to make another move. Finally, nearing death, Kawahara couldn't hold out any longer, and Deeded away Kageyama's board.

Kageyama's recovery was hastened by his Volrath's Stronghold. A Treetop Village of his own complicated things. Kawahara hid behind Yavimaya Elder for a turn. Kageyama went for the throat. He checked for Spiritmongers with Cabal Therapy, then flashed it back to leave Kawahara with just Recurring Nightmare and lands in hand, his Treetop Village having traded with Kageyama's. Two turns later Kageyama swung in for the kill.