Round 2: Terry Lau vs. Mike Gurney 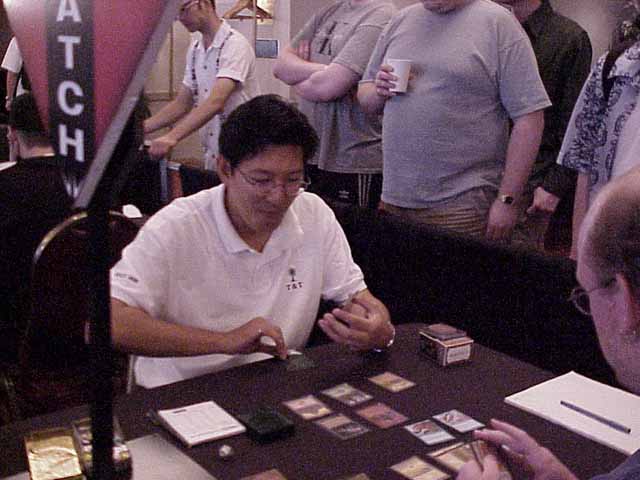 This Round 2 feature match saw 1996 Canadian national team member Terry Lau and 1996 Canadian Nationals Top 8 finisher Mike Gurney battle it out. Both players have experience on the Pro Tour, with Lau having seven Pro Tour appearances, making Top 4 at Pro Tour-LA in 1999, and Gurney with three stops on the Pro Tour. Lau came to the table with a red/green deck with "bombs" like Volcanic Winds, Ancient Hydra and Laccolith Titan; sadly, his only removal spells were the Hydra and the Winds. His next best spells were two Flaming Swords. Gurney was wielding an amazing white/blue monster of a deck, which included Noble Purpose, Stronghold Zeppelin, two Troubled Healers, Jeweled Spirit, Stinging Barrier and Defiant Vanguard -- with six Rebels it could recruit! Lau was aware of the quality of the deck he was facing and jokingly offered Gurney a draw� For some reason, Gurney declined.

Game 1: This game wasn't very interactive, Lau played a third turn Whip Sergeant which Gurney answered with a fourth turn Oraxid Gurney. On his fourth turn, Lau drew and played Spore Frog, skipped his land drop, and said "Go." With Lau displeased about his mana problems, Gurney took advantage of the situation by playing Stronghold Zeppelin the following turn. Lau missed another land drop, rinsed and repeated for a few more turns and Stronghold Zeppelin did 21 points of damage to him. 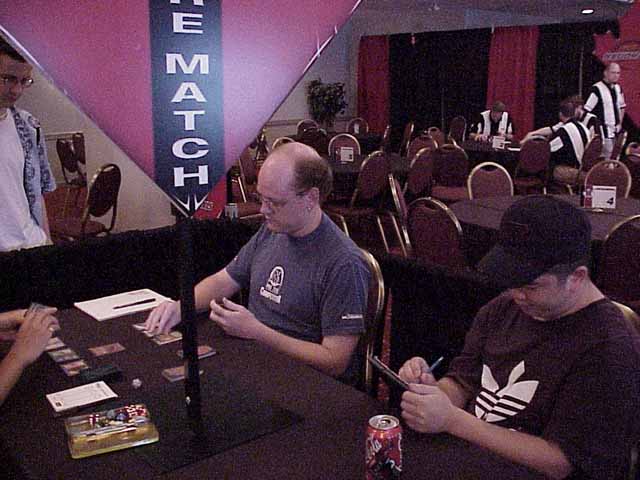 Game 2: If the first game wasn't interactive, then the second was plain just unfair. Lau started off with a mulligan, and had to keep a slow draw, playing fourth turn Keldon Berserker and fifth turn Thresher Beast. Gurney's answer was: 3rd turn Troubled Healer, 4th turn Stronghold Zeppelin , 5th turn Muzzle the Thresher Beast and Excise the Keldon Berserker, 6th turn Jeweled Spirit and he sealed the deal with a Noble Purpose the next turn. Lau was 100% wrecked as he fell to 1-1, and Gurney is in good shape to 3-0 his draft table.