Round 2: Thunderclouds Over the Battlefield

oung phenom Shahar Shenhar faced down Brazilian graybeard Willy Edel this round, both having enjoyed a victory in their first match of the tournament. As is the rule at this event, the players were given a list of their opponent's picks in the draft, but not their final decklist. During the draft, Edel had sat to Shenhar's immediate right, and so he was surprised to see so many blue cards in Shenhar's arsenal. He was in for a bigger shock as it became clear in Game 1 that Shenhar was, in fact, playing mono-red!

Shenhar himself had thought he would end up red-blue until the middle of pack three, but after a pair of Stinkdrinker Daredevils and a Blind-Spot Giant tabled, he found he had enough depth to cut blue entirely. Shenhar explained, "If you look at my blue cards: Oona, Queen of the Fae, Vedalken Dismisser, Æthersnipe... that's a lot of expensive drops, and I've already got three Thundercloud Shamans."

As for Willy Edel, the blue-based archetypes are his favorites in Modern Masters, so he was happy to see lots of blue cards in the middle of the first pack. He wound up with what he called a "pretty good" version of Blue-Green Tempo, an archetype he thinks is underestimated. "I drafted this deck a lot during Time Spiral. It's pretty much the same here," he said. Although he would've liked to have more suspend cards, he said it had a good chance of pulling out a 2-1 performance. 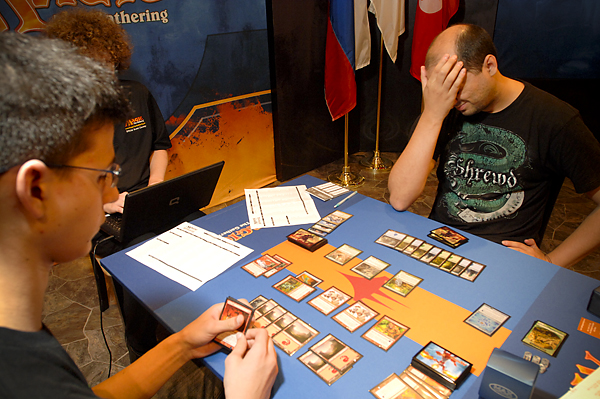 Willy Edel's Blue-Green Tempo strategy was solid even with Shahar Shenhar having taken a lot of cards Edel could have played. All of those blue cards ended up in Shenhar's sideboard so that the young pro could play his very deep mono-red deck.

In Game 1, the battlefield locked up quickly. Edel had Giant Dustwasp on turn two rather than Errant Ephemeron, meaning Shenhar could put a stop to it with Rift Bolt. Meanwhile, Edel had put the shields up with Penumbra Spider and Kitchen Finks, as both players amassed armies. Edel eventually found Trygon Predator and started whittling away Shenhar's life total. Unfortunately, it wasn't nearly enough pressure. Shenhar got himself to a place where he could play Thundercloud Shaman, forcing Edel to bounce a giant with Æther Spellbomb if he wanted his four-toughness creatures survive, and then play a backbreaking second Thundercloud Shaman. One 2/4 Penumbra Spider token isn't much a bulwark against four very angry giants.

Between games, Edel marveled at all the blue cards Shenhar had drafted but wasn't playing.

"You cut blue, all of the blue! Oona, Ephemeron, Dismisser, Æthersnipe...I wanted all these cards!" 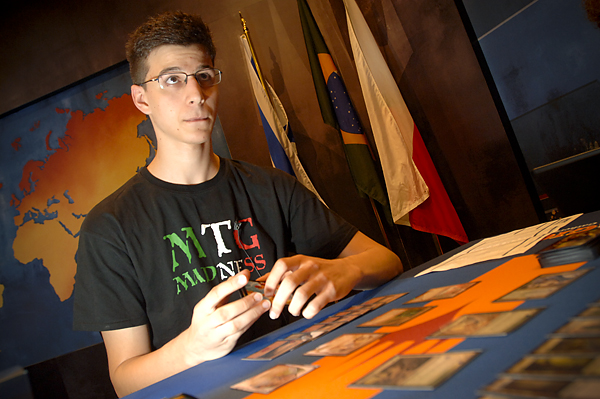 Shenhar's sporting not one, not two, but three copies of Thundercloud Shaman.

Edel got the jump on Shenhar in the second game, opening up with suspended Errant Ephemeron and Trygon Predator after Shenhar put out Runed Stalactite. Shenhar had nothing to do but play out Stinkdrinker Daredevil and a discounted Thundercloud Shaman that claimed no victims. Edel took a couple hits from the 4/4 while Shenhar bought time with Stingscourgers, first on Trygon Predator then on the Ephemeron after it crashed in for 4.

This set up a turn where Shenhar was able to make it look like a close one. He attacked with Thundercloud Shaman, Stinkdrinker Daredevil, and two Stingscourgers with two mana open into Edel's board of untapped Trygon Predator, untapped Penumbra Spider, and tapped Giant Dustwasp. Edel blocked the two Stingscourgers. Brute Force killed his Trygon Predator, and he fell to 7. Then Shenhar suspended Rift Bolt.

The bad news for Shenhar was that Edel had been sitting on Incremental Growth this whole time, and so simply untapped, pumped his creatures to a lethal 9 damage, and attacked. 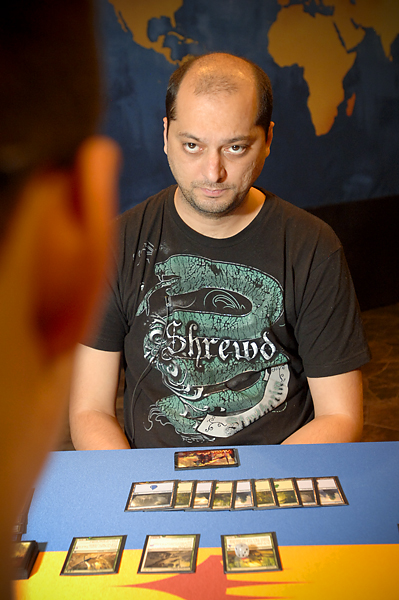 Edel's deck had plenty of power to back up its massive suspend spells.

For the deciding game, Edel played out his ideal opening: Æther Spellbomb, suspended Errant Ephemeron, watched as Shenhar fails to draw a third land, and then Trygon Predator. Shenhar was only stalled for a turn, but still had no play on three mana. Luckily for him, Edel had no play on four mana and Shenhar found yet another Mountain waiting for him to enable Tar Pitcher.

Edel tapped five for Sporoloth Ancient. Shenhar summoned Stingscourger to send it back, and when the Ephemeron came off suspend, his Tar Pitcher sacrificed the new goblin for 2 damage on the Ephemeron. Edel, having seen the Sudden Shock on Shenhar's card list, knew not to wait on his Echoing Courage. Shenhar was forced to untap, then throw the Pitcher itself and Sudden Shock to kill the Ephemeron.

Edel kept on hitting with his Predator, leaving Shenhar at 6, and Eternal Witness got him back his Ephemeron. When Shenhar went for Thundercloud Shaman the following turn, Logic Knot from Edel sealed his victory.

Edel was glad that his deck was on pace to exceed his expectations. The key, he says, are the draws with early suspend and evasion. He also quietly moved to 3-0 lifetime against Shenhar.

I asked Shenhar about his opening hand, and he said that while it wasn't an easy keep, he was sure about his decision. The hand in question was two Mountains, Sudden Shock, Stingscourger, Tar Pitcher, Brute Force, Thundercloud Shaman on the play. "I'm not happy to be keeping it, but I'm definitely keeping it."