Round 2: Tomi Walamies vs. Eugene Harvey 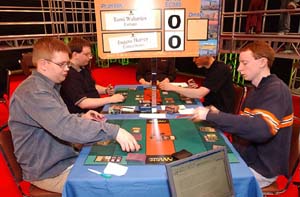 A pair of reigning national champions met in the feature match area in round 2. Tomi Walamies has won back-to-back Finnish national championships while Harvey won US Nationals last summer. Walamies will be spending this fall in school in the US so the players joked about whether Walamies should try to steal Harvey's title instead of defending his own. Walamies said he wouldn't, because he will have moved back to Finland by then, though he did allow that the prizes were a bit better in the US. "In 2001 I won $500 for winning Finnish nationals and in 2002 I won a soda."

These two already met once this weekend. In the second round of the Masters Series Harvey (who was running 'Tog) played an Upheaval that he thought was going to ice the game for him. Walamies (who ran a very nifty Pattern of Rebirth deck) sacrificed his Academy Rector as a response and went and got one of his techy new additions to the Pattern deck: Parallax Wave. He Waved out his own creatures as a response to the Upheaval and that Upheaval wound up icing the game for him, not Harvey.

Both players drafted black-green decks to play with for the first four rounds of Pro Tour Yokohama. Harvey went first, but Walamies had the early tempo advantage thanks to an Elvish Warrior, followed by a face-down creature and a Screeching Buzzard. Harvey spent his fourth turn just flipping over and then sacrificing a Haunted Cadaver and it wasn't at all clear he would have time to take advantage of the card advantage from making Walamies discard two Crowns of Suspicion and a Needleshot Gourna. 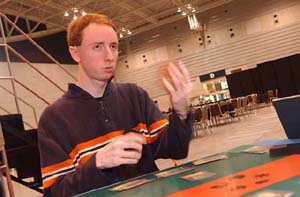 One turn later things were much more clear: Harvey played Infest and suddenly Walamies was down to just that Elvish Warrior. Harvey's next play was Anurid Murkdiver and suddenly the game had turned completely around. Walamies played out what was left of his hand (Withered Wretch and Severed Legion) and that forced the Murkdiver to play defense for a few turns, but Harvey still had plenty of gas left in his tank: Treespring Lorian was followed up by Brontotherium, and Harvey still had Cruel Revival left in his hand. Not even a Timberwatch Elf off the top could save Tomi Walamies and soon they were shuffling up for game 2.

In Game 2 it was Harvey who had the early tempo advantage. He started with a turn two Gempalm Strider and when Walamies decided not to block it with his turn three morph, Harvey swatted the morph (which turned out to be Infernal Caretaker). Walamies played a second morph, which also declined to block, and Harvey added Krosan Vorine to his team. When Walamies sat behind five very threatening untapped land and a face-down creature, Harvey just played a Haunted Cadaver and said go, setting himself up for an amazing turn six. After Walamies tapped out for Glowering Rogon (but had no beasts to use with its Amplify ability), Harvey sent in his team, with the Vorine provoking the Rogon. With exactly three cards in his hand, Walamies also moved his morph over to block the Cadaver. Harvey used Wirewood Pride to boost up the Vorine so it would trade with the Rogon and also used Vitality Charm to give the Cadaver +1/+1 and trample, allowing him to sacrifice it and clean out Walamies' entire hand (which included both Death Pulse and Cruel Revival). After that Harvey was so far ahead that it was all over but the joking. 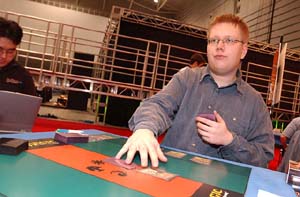 Walamies commented afterwards "My deck was 20 cards short." Tomi has had significantly more success with 60 cards decks over the years than 40 card decks, so his weekend (with an 0-2 start in the Pro Tour but a $10,000 payday in the Masters) is actually pretty typical for him. Walamies also commented that this match could add new fuel to the Haunted Cadaver debate: "Normally when I read feature matches where someone activates a Cadaver they lose because they're so far behind, but they were really good in both games here."