Sideboard contributor Victor van den Broek really wants to win this match. Both players lost their first round but Victor is perilously close to falling off of the gravy train. "I'm scheduled to fall off after Boston if I don't do well this weekend." 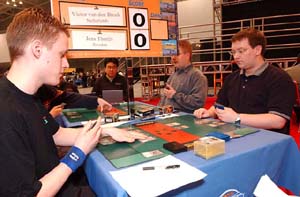 Invitational champion Jens Thoren has had an otherwise unspectacular year but only needs six points between now and the next individual Pro Tour to remain on the gravy train. Obviously he would like to win but the real pressure is on Vic.

Jens went first but Victor made a turn one Goblin Sledder. Battlefield Medic came into play on Jens's side, which seemed to favor him until Victor dropped the turn-two Sparksmith. Cabal Archon joined the stoic Swede's side and promised to make things difficult for the Sparksmith. Undaunted, Victor played a Goblin Taskmaster and took three from his Smith to kill the Medic.

Jens had his Archon tapped with a cycled Choking Tethers and played a Vile Deacon, which was killed on Victor's next turn. He fell to 14, which could prove precarious if he didn't kill the archon soon.

Jens kept playing creatures in the hopes of getting Victor low enough to finish off. Glory Seeker joined the Swede's team and Victor added Keeneye Aven, which finally gave the Dutch player an attacker. When Victor finally tried to shoot the Archon at the end of Jens' turn, the Swede threw it at Vic instead and then used Cruel Revival on the goblin.

Jens had gone back up to 18 thanks to the Archon and Victor sent in the team to deal some damage. Glory Seeker blocked goblin Taskmaster and Victor sac'd it to his Sledder preferring to deal six to his opponent and play a Glintwing Invoker than pumping his Goblin to kill the 2/2 soldier.

Jens had another Cabal Archon and Victor sent his Glintwing and his morph into the red zone. When Jens double blocked the Glintwing Victor used Pinpoint Avalanche to kill them both and save his 3/3. Cabal Archon was sac'd and when t he dust settled both players found themselves at 10.

Jens looked to stabilize with a daunting Defender and blocked the morph with it when Victor sent the team. When the morph was revealed to be Rockshard Elemental he packed it in.

Jens again played first while Victor had a turn one goblin. This time it was Goblin Taskmaster, which got in for two before Jens played a morph. Jens didn't want to trade and took another point form the goblin and Victor added a Blade Sliver to his side of the table. 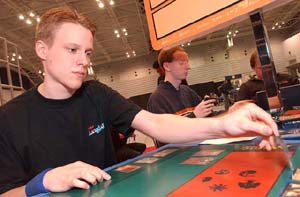 Jens's Smokespew Invoker traded with the sliver and Victor kept the pressure up with a morph and another Taskmaster. When Jens kept his morph back on turn five after missing a land drop, Victor grew suspicious and cycled Choking Tethers to tap the man of mystery. Jens revealed a Daru Healer and prevented one of the six damage coming his way and fell to 12.

Screeching Buzzard brought Victor's offensive to a halt and he just played a Glintwing Invoker and passed the turn back to Jens. The Swede finally drew his fifth land after missing it for the last two turns and played a Daunting Defender. Victor pushed it aside with a Pinpoint Avalanche and sent in the team again. The Healer ate his Taskmaster but Jens took another five and fell to 7 while Victor was till at a robust 16.

Now that Jens had his fifth land there was no holding back the Daunting Defenders and he played another one while sneaking in some damage with his flier. The Defender was daunting indeed for Victor's offense and he played a Riptide Shapeshifter. Jens continued to whittle away and added a White Knight and another morph to fortify the ground.

Victor played out his hand to play a Flamewave Invoker and cast Mistform Mask. With his Buzzard—or should I say Wall?—being shut down by the Mask, Jens had to look elsewhere for offense and he sent in his Daunting Defender, which ate a goblin. Jens played a sixth land and gave Victor a look at his best card—Glarecaster. Victor could not kill it with his small window of opportunity and instead played a morph.

Jens sent his 3/3's into the red zone and Victor triple blocked the Daunting Defender, which dealt its damage to the Shapeshifter. Victor activated it naming Wizard and promptly hit a Sage Aven. While Victor looked at his three lands and a Keeneye Aven, Jens engaged in—for this otherwise stoic match—what can only be called trash talk. 'Any good cards?" Victor came back with a zinging, "Some." With the smack talking out of the way, Jens flipped over his Infernal Caretaker and picked up his Smokespew and played it.

The WWE-like atmosphere continued when Jens asked, "Attack?" and Victor said, "Sure." The Glarecaster took Victor down to 6 with Jens sitting at 7. He unmorphed his Rockshard EOT and swung it into the Buzzard and discarded a land. When Jens played his 8th land for his Smokespew, Victor conceded and they went to the rubber game.

This game was Jens's chance to make the one-drop going second with a Deftblade Elite. Victor's first play was the same creature type as his first two games—goblin—only this time it was a turn three Flamewave Invoker. Jens answered with a grey ogre of his own—Cabal Archon. 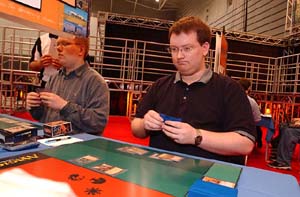 After Victor played a morph on the next turn things started looking grim for him when Jens played three consecutive Daunting Defenders. Somewhere in the middle, Vic played a Riptide Shapeshifter, which he upgraded, to Rockshard Elemental while chumping a Defender. Keeneye Aven also joined the team prior to the appearance of the third 3/3 cleric.

When Jens tapped out except for one swamp—meaning Jens could only activate the Archon once—to cast the third Defender and attacked with the first two, Victor took it and went to 13. On his next turn he had enough mana to Choking Tethers all of Jens's blockers and unmorph his Blistering Firecat. He swung with everyone and he was able to do enough damage to exceed the Archon's grasp.