Round 2: When Faeries Wear Red

By by Blake Rasmussen 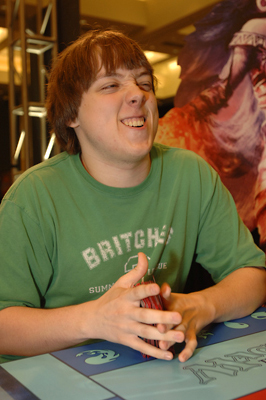 Chris McDaniel is prepared to be embarrassed by Faeries.Chris McDaniel sat down across from Luis Scott-Vargas and immediately bemoaned his fate, claiming Faeries as his worst matchup.

"This could be embarrassing."

Both vets talked shop while shuffling up, commenting on their first rounds. McDaniel, sporting a mono-black deck full of life gain, beat a mono-red deck, while Vargas took down the Faeries mirror in the Feature Match area.

Vargas won the die roll and elected to play first, and both players kept their starting seven.

Vargas led with Mutavault into Bitterblossom into the non-stock list Shadowmage Infiltrator (Vargas's partner in crime, Paul Cheon, is also sporting a Finkel-fueled Faeries deck this weekend), while McDaniel countered with Swamps and the little-seen Tenth Edition common Phyrexian Rager, which nets a card and a blocker for the Infiltrator.

A second Bitterblossom came down for Vargas on turn four, threatening to completely take over the game, especially after McDaniel's Korlash gets Spellstutter Sprited.

After Vargas made a few tokens and attacks, passing the turn with mana showing, McDaniel knowingly asked, "Upkeep?" Sure enough, there was Mistbind Clique. McDaniel hit the flashy Faerie with a Tendrils of Corruption, putting him back up to 19, but tapping him out for the turn regardless. Vargas tried the same trick again the following turn, but this time it stuck, stealing another turn for last year's champ.

By this time a slew of Bitterblossom tokens were spread across Vargas's side of the table, and with the Clique leading the way, McDaniel was quick to scoop only five minutes into the round.

Both players kept their seven, and McDaniel led with Thoughtseize, seeing Remove Soul, Ancestral Visions, Bitterblossom, Murderous Redcap, Thoughtseize, Island, and Mutavault. He took the Bitterblossom, a fine choice given that his mono-black deck had no way of dealing with the pesky enchantment.

Vargas managed to find a Sunken Ruins and Secluded Glen over the next two turns and played a Thoughtseize of his own, revealing two Beseech the Queen, Terror, and Profane Command, taking a Beseech the Queen.

The remaining Beseech the Queen the following turn found a Korlash for McDaniel, even as he shook his head while searching. A resolved Korlash in this matchup could go a long way toward taking the game, but it would more likely run right into the Remove Soul revealed earlier to Thoughtseize. Meanwhile, McDaniel sat on four lands, while Vargas built up to five after resolving his Ancestral Visions. 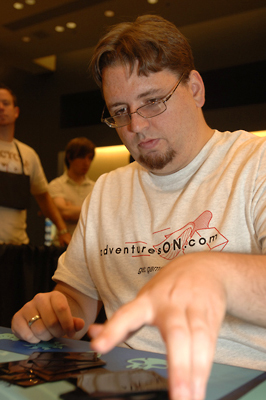 Luis Scott-Vargas, last year's national champion, is happy to oblige.A lonely Spellstutter Sprite flew in for 1, then got championed by Mistbind Clique on McDaniel's upkeep, after a second Sprite countered the attempted Terror.

Tendrils of Corruption took care of the Clique the following turn, but Vargas had managed to find and play a Bitterblossom in the meantime, threatening to take over the game with 1/1s. A Murderous Redcap went to McDaniel's dome with no other available targets, putting Vargas up 17 life to 8.

Both players had been moving pretty quickly until this point, but McDaniel, facing an increasingly troublesome board, paused before trying to clear it with Damnation. But Murderous Redcap persisted and another Spellstutter Sprite flashed in after the Damnation, and the Mutavault was still patiently waiting among Vargas's lands... to say nothing of Bitterblossom. McDaniel still found himself facing lethal after a second Redcap dropped him to 1.

Corrupt on a Faerie token built McDaniel back up to 7, which then became 2 with the return swing, earning the scoop. McDaniel flashed the Oona, Queen of the Fae in his hand that he was never quite able to play because of constant pressure from her Faerie cohorts.

The sideboarded Redcaps from Vargas, McDaniels points out, were key.

"If those had been Damnations, I would have been in much better shape," he lamented.