Round 2: When Hall of Famers Collide

going to spare you the lengthy introductions and simply direct you to the Hall of Fame pages of these two competitors, who indeed have both been inducted as part of the inaugural class this very weekend. Suffice it to say they have a stunning thirteen Pro Tour Top 8s between the two of them. However, they've both been out of the game for a time, so this is a chance to see who can prove they've still got what it takes.

As the competitors shuffled up, Darwin asked about Alan's first round. It was an unorthodox tale involving Early Harvest-fueled shenanigans culminating in a giant Maga, Traitor to Mortals that ended Alan's life in one fell swoop. At the end of the story, he shrugged. "The problem was I didn't know it was combo, so I tapped out," he added with a sheepish grin. 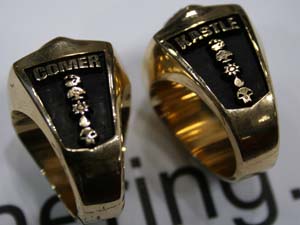 Meanwhile, Alex Schvartsman wandered over, his eyes drawn by a pair of gleaming objects on the side of the table. "Are those actually Hall of Fame rings?" he asked, envious. They handed him one and he looked it over, clearly impressed.

"This is the match to determine which Hall of Famer drops to 0-2," said Alan, smiling as always before he wished Darwin luck. Darwin responded with "Thank you" and the match began.

The first play of the match was a turn-three Sleight of Hand from Alan, followed by a Blackmail. Darwin read the card and then revealed double Gifts Ungiven and a Carven Caryatid. "I don't like that card," said Alan as he took a Gifts. "Good to know," Darwin responded. He then ended his turn without playing a land.

Darwin untapped and played Sensei's Divining Top and also ended his turn without a land, oddly choosing not to dig for one with his Top. He had access to green, black and white mana, but no blue as of yet. Alan untapped and quickly announced, "I'm just going to discard," pitching a Blackmail as he needed to keep up mana for Remand.

However, Darwin still had no lands, even after digging with his Top. "Wow, we suck," he lamented. Alan discarded again, this time a Clutch of the Undercity. "Would you like to read it?" he offered.

Eventually he found a third land, but Darwin had now found a fourth, and was able to play a Sakura-Tribe Elder into Remand and then replay him immediately. Alan, even with the extra card, was still stalled on three and had to discard yet again. From the bridge (the spectators were standing on a Japanese-themed bridge), Scott Johns called down "I told you 17 lands wasn't enough!"(This was, of course, a reference to Alan's long history of playing constructed decks with only that many lands.) 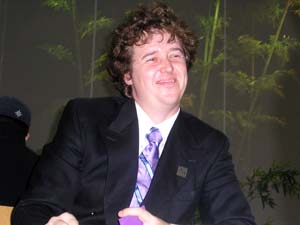 Alan clearly was enjoying himself Wednesday.

Alan discarded Eye of the Storm and quickly handed it to Darwin, who paused, eventually admitting, "Wow, okay, I don't…really want to know." He clearly wasn't used to seeing that card in an opponent's deck (and honestly, who is?).

Darwin sacrificed his Elder to get an Island, then played a Bird and passed the turn. On Alan's end step he attempted Gifts Ungiven but it was met with Mana Leak. He untapped and tried Loxodon Hierarch, but Alan had a Remand. Darwin played a sixth land and resolved Carven Caryatid. Next turn, his Hierarch hit another Remand, and Alan used a Telling Time.

Alan untapped and paused, "The thing about playing against you…is I have no idea what you really have in your deck."

"I have no idea what's in YOUR deck," Darwin retorted.

It became clear why Alan was wondering when he cast Cranial Extraction naming itself. He missed, but took the chance to thumb through Darwin's deck. Darwin activated his Top, and meanwhile Alan's head appeared on a video projection screen in the background showing classic footage from past Pro Tours, saying "My name is Alan Comer…" Real Alan looked up, then grinned and said, "Okay, now that's distracting."

Darwin resolved Arashi, the Sky Asunder and attacked for four. Alan just untapped, laid a land and played Eye of the Storm. Darwin sighed and picked it up again, trying to read it more carefully this time. Meanwhile, the video continued and suddenly Mark Rosewater was talking to a younger Darwin Kastle. "Also distracting…" Darwin added.

He could only activate his 1/1 Svogthos, the Restless Tomb and attack for 10. Alan untapped and it was now or never. He cast Clutch of the Undercity targeting Arashi, then Sleight of Handed and copied Clutch onto the Hierarch, then passed the turn.

At this point the on-screen Darwin was saying something about Vampires.

Real Darwin channeled Arashi for 1, killing his own Birds, then activated Svogthos and attacked for 3. Alan cast Last Gasp targeting Svogthos, then targeted it with Clutch as well (just in case) and resolved Sleight of Hand again. Darwin said go and when Alan untapped and showed Tidings, he decided he'd seen enough.

"I'm ready for the next game."

Both players kept their hands, and Darwin's first two creatures (Nezumi Graverobbers) both met with Last Gasp. His Trophy Hunter met Rewind, and then Alan Extractioned for Cranial Extractions, needing to protect his combo. Unfortunately he whiffed again, exclaiming "Persecute!" as he thumbed through the deck. Darwin's hand also included a Naturalize, which could be problematic.

Darwin played out Loxodon Hierarch and a topdecked Graverobber. The Hierarch was Executed, but Alan had no fifth land. Eventually Darwin flipped the Graverobber and it was quickly Clutched back to his hand. Double Remand slowed it on the way back down, then Alan untapped and Tidings'd, then Sleight of Hand.

Unfortunately, he couldn't find a way to deal with the Naturalize in Darwin's hand, and had to keep burning his card drawing to search for an answer. Eventually Darwin was able to overwhelm him with a flipped Graverobber and it was onto a final game. 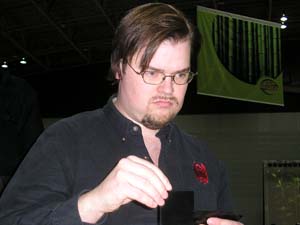 Darwin battled back for a Game 2 win.

Both players kept their hands again. A turn two Sakura-Tribe Elder met a frown from Alan. A Trophy Hunter joined the Onslaught but the second was downed by Slay. Darwin tapped out for Grave-shell Scarab but it was returned to his hand by Remand.

Alan laid a sixth land and fell to 14 on Darwin's attack step, but Mana Leaked a Hierarch. He then untapped and played Tidings plus a seventh land, discarding Hideous Laughter. A Remand delayed the Grave-shell Scarab another turn and Alan played out an eighth land.

Darwin played a second Elder, which Alan was happy to allow, and followed with a second Top. Alan used Sleight of Hand, played a ninth land, and ended his turn. When Darwin played a sixth land and attempted the Scarab, he responded with Telling Time but had to let it resolve. He then targeted it with Slay and Darwin drew a card in response.

Interestingly, Darwin was already at 9 from painland damage.

"I think you're racing yourself. I wish I could help, I really do," chuckled Alan.
Alan laid a tenth land and played out Eye of the Storm with three mana up. Darwin paused. "Interesting…"

"I'm going to read this during my upkeep," said Darwin. He did. He then drew for his turn and then realized he still had no idea what the card did. He called a judge and there was a lengthy discussion of hypothetical situations.

"Wow, that's…I'm sorry, this turn might take awhile." He shook his head and picked the Eye of the Storm up yet again.

Going back to what he knew, he attacked for two with his Elders, but soon he had to decide what to do with the rest of his turn. He started mumbling under his breath, "If I play this, and you have a counter…(mumble mumble, mumble mumble mumble)…If I play this…hmm, this has got to be the right play."

He announced Persecute targeting Alan, who allowed Eye of the Storm to remove it from the game. Alan then responded with Remand targeting the copy of Persecute. Darwin paused. He asked a 10-minute question that I half wish I could remember from memory, but honestly, you're probably better off worrying about more important things. Alan answered succinctly, "Yes."

Yet again Darwin ran through his desired scenario. When he got the affirmative from the judge that it would work out the way he wanted, he lapsed into thought. "That seems good…" Finally he was ready.
He allowed Remand to go underneath Eye of the Storm. He then responded with Naturalize targeting the crazy enchantment. After that, a bunch more spells jumped on top of the stack, but I'll spare you the details and leave you with a summary: Alan got Persecuted twice (losing his whole hand), Darwin got Persecuted once (for Green, which whiffed), and Darwin drew a card from Remanding Alan's copy of Remand.

The net result: Darwin had three cards in hand and two creatures and Alan had no hand and no non-land permanents.

Despite a topdecked Slay that ended Svogthos's life, it was easy to end it from there.
Final Score
Darwin Kastle 2, Alan Comer 1

Eye of the Storm

3 Eye of the Storm