Round 2: www.starmaker.nl/lap vs. Panzer Hunter 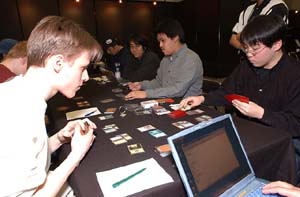 Obscured by their oblique name, www.star-maker.nl/lap are a team of strong Dutch talents. Jelger Wiegersma, a familiar face after his Top 8 at New Orleans, joins forces with Frank Karsten and Victor Van der Broek. After crushing the dreams of Metagams, who ground into the tournament, they face Japan's hometown heroes Panzer Hunters. Thirsty for a Masters title after coming so close last year at Tokyo. Headed by the reserved Itaru Ishida alongside Reiji Ando and the resurrected Kazuyuki Momose, they are a force to be reckoned with, and have demonstrated that they know their way around team draft.

Wiegersma was all smiles as Ando suffered mana difficulties in their first game. He dropped a number of creatures into play before Ando was even on the board. Things were not as clear-cut in the other two matches. Karsten and Momose took turns destroying each other's creatures, while Ishida and van der Broek played up to a monster stalemate.

Ando failed to draw anything spectacular and started shuffling for Game 2. However, the bad news was soon answered by a monster Demoralize from Ishida, who had Looted through his deck with a quickness. Van der Broek could do nothing to stop the onslaught.

Karsten finally got some heavy hitters to stay in play. His Springing Tiger and Crazed Firecat were out for blood, held temporarily at bay by Dirty Wererat and Squirrel Nest. Meanwhile the tables had turned on Wiegersma, whose deck had decided he needed only three land for the second game. Ando removed what few blockers showed up, and they were on to Game 3.

Momose had failed to draw removal for Karsten's monsters, giving the first game to Karsten. Ishida was continuing to play the slow game against van der Broek, this time with two Hallowed Healers working for him. van der Broek had Compulsion to make sure he found all his best creatures.

For the final game, Ando and Wiegersma traded their first four creatures, leaving Ando with the board's only monster: a Gravegouger. In the face of this mediocrity, Wiegersma chose to Mind Twist Ando with Last Rites, keeping only Aven Fisher, and leaving Ando with nothing. Ando drew nothing, while Wiegersma drew a land to put out his Fisher. 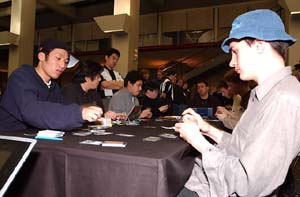 Ishida and van der Broek's boards had grown cluttered. Van der Broek's army included two Werebears, a Springing Tiger, a 5/5 Ivy Elemental, and a Crashing Centaur. Ishida hid behind the Healers, Teroh's Faithful, Beloved Chaplain enchanted with Ghostly Wings, and a pair of Looters. At the end of Ishida's turn, van der Broek Deluged. He untapped and dropped Seton's Desire on his Aquamoeba and attacked all-out. Ishida got around the Desire with Second Thoughts. This freed up his Chaplain to block the Tiger, and leave him at two life.

He untapped and passed it back. van der Broek attacked again. This time staying alive cost Ishida his Faithful, a Healer, a Mystic Familiar and a Resiliant Wanderer. However, he had a plan. He Looted van der Broek twice, then untapped and Looted twice again. His Broker had just come online, so that too milled two cards. Then he dropped Cephalid Coliseum, milling the last two cards of van der Broek's library. Van der Broek extended the hand.

Perhaps Wiegersma's hat was not as lucky as he thought it was. He had drawn three consecutive land following his Last Rites play, while Ando had drawn three creatures. The Fisher traded with one and gave Wiegersma yet another land. Then he drew another. The Posessed Barbarian that Ando drew was just insult to injury. 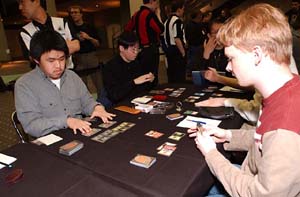 And so, with Panzer Hunters already having taken the match to earn a chance at the greatness they missed, Karsten and Momose were just playing for pride. It was slow in coming, both players having clumsy draws, but eventually Karsten hit his seventh land and dropped back-to-back Crazed Firecats to take the match.