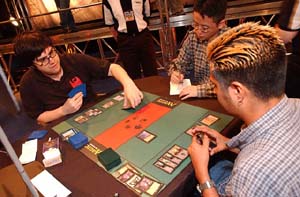 Zvi has multiple Pro-Tour Top 8s and is also well known for his insightful articles, the most well known being an analysis of a deck based around a card named Fires of Yavimaya. Gerardo is one of the few Mexican players who is consistently on the Pro Tour. Both of the former Invitational participants sit down and an aura of seriousness permeates as they shuffle their decks. It is unclear if the silence is due to focus or a language barrier but there is no small talk as both players have their game faces on. Gerardo is playing a Black/White reanimator deck.

It differs from other reanimator decks as it also has a built in lock with Contamination and Nether Spirit or Zombie Infestation + 2 Squee Goblin Nabob. The deck also splashes White for Vindicates and it also has Rishadan Ports to help versus control decks. Zvi's creation is an Oathavore Deck. With only two Cognivores as creatures in his deck, an Oath activation leads to a huge flyer as his other spells are all counters of some sort or card drawing.

Zvi wins the roll and elects to go first. He plays an Underground River and passes the turn. Gerardo attempts to Duress Zvi, but a Brainstorm is cast in response to hide his good cards. Gerardo takes a Mana Leak, and leaves Zvi with a Forbid and lands. Gerardo has a puzzled look on his face since one of the lands is a Treetop Village and he is unsure of what he is up against. Zvi then plays a Treetop and passes the turn. Gerardo Entombs a Verdant Force, but his attempt to Reanimate is met with a gleeful laugh from Zvi as he Force Spikes it. A few turns pass while both players lay lands and attempt to get set up. Gerardo plays a Rishadan Port and taps one of Zvi's lands every turn. The excitement is broken up when a Nether Spirit is hard cast.

It resolves and it hits Zvi a few times. An end of turn Entomb for a Squee Goblin Nabob is met with a Krosan Reclamation, shuffling the Squee and the Verdant Force. Gerardo attempts to play a Visara, and surprisingly it resolves, even though Zvi has Forbid mana available. The reason is evident next turn as Zvi casts Living Wish and gets a Gilded Drake from his sideboard. He trades the Drake for the Gorgon Legend, and after a few turns the treacherous female does Gerardo in.

Gerardo boards in a full set of Phyrexian Negators and Mesmeric Fiends. 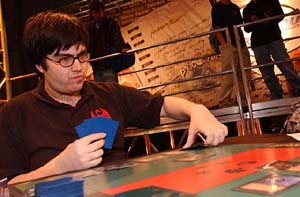 Zvi takes a trip to Paris and comes back with one less card. Gerardo casts Duress and takes a Brainstorm and leaves Zvi with an Accumulated Knowledge, a Forbid, two Treetop Villages, and a Yavimaya Coasts. A Treetop Village comes out the next turn. Gerardo plays a Rishadan port and does not tap anything during Zvi's upkeep. Instead he waits for the end of Zvi's turn to Vampiric tutor for a Tainted Field. Gerardo then Vindicates Zvi's next two blue sources, but Zvi is able the AK in response to the first Vindicate and Brainstorm in response to the second Vindicate. Gerardo sees his opportunity and Vampiric Tutors at the end of Zvi's turn. Zvi is way behind on mana at this point and Gerardo is able to Port his Island and cast the last card in his hand, a Phyrexian Negator safely. The Negator hits Zvi down to 14 the Next turn and all Zvi can do is play his 4th land, another Treetop Village.

A Mesmeric Fiend from Gerardo takes a Force Spike and leaves Zvi with 4 lands in his hand. Meanwhile the Negator hits Zvi down to 9 life. Showing the audience his best Kai Budde impression, Zvi rips a Pernicious Deed off the top of his deck, and takes a beating down to 3 life before clearing the board. Gerardo plays a second Rishadan Port and between end of turn and during his turn tapping, Gerardo is able to tap all of Zvi's Blue producing lands and plays another Phyrexian Negator. Zvi has to main phase Brainstorm in an attempt to find an answer for the lethal Negator.

He finds an answer somewhat, and plays a Masticore. The problem lies that his only 2 untapped lands are Polluted Deltas, and Zvi can't sack them or he will die to the trample damage from the Negator. The Masticore absorbed 4 points of trample and takes out four of Gerardo's lands, and Zvi draws nothing of consequence the next turn and scoops up his cards. 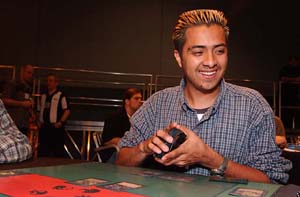 Jealous of Zvi's trip, Gerardo decides to go to Paris as he stares at his hand with no land. Gerardo has a Duress turn one but he decides to play around Force Spike and he passes the turn. Zvi then plays an Oath of Druid turn 2, the first time in the match it has been seen. Gerardo takes a Mana Leak with the Duress, leaving Zvi with a Counterspell, Oath #2, a Polluted Delta, and a Swamp. The game slows down as Gerardo spends the next 5 or 6 turns tapping 2 lands during Zvi's upkeep. Gerrado has spells but he waits for a Duress, and Zvi has a bunch of permission in his hand. Finally a Duress shows up and it nets a Counterspell, leaving 2 Force Spikes, another Counterspell, 2 Oath of Druids, and a Krosan Reclamation. Zvi draws well and plays a Pernicious Deed.

Gerardo taps down enough land to get around Counterspell so he can Vindicate the Deed during his turn. Zvi then casts Fact or fictions and the piles presented are: Living Wish x 2, Treetop Village or Pernicious Deed, Brainstorm. Zvi does not hesitate and snatches up the Living Wish pile. Gerardo then plays a Mesmeric Fiend and takes the Krosan Reclamation, perhaps hoping for a bad Oath and a possible decking. Instead, Zvi Oaths up a Masticore, only loosing a few cards from his library. A Duress by Gerrado is countered. Gerardo then plays Visara, somewhat puzzling as Zvi is able to Oath up a Cognivore and then use one of the two Living Wishes in his hand for a Gilded Drake.