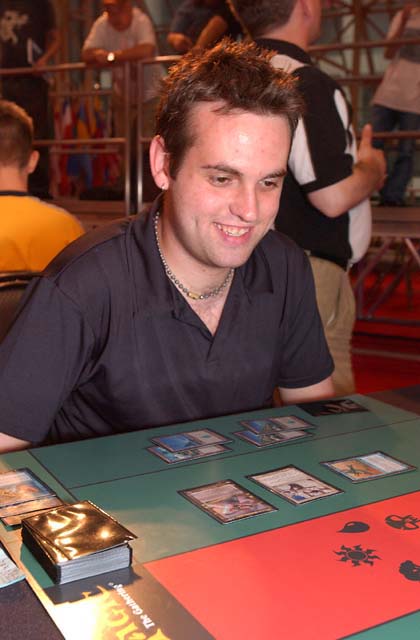 Canadian Elijah Pollock was very confident about his matchup against Finland's Jussi Perälä.

Both players mulliganed their opening hands. Pollock couldn't help but check the top of his deck to validate his decision. He let out a sigh of relief, as he saw defeat written there.

Pollock came off the blocks with Obsidian Acolyte and Angelic Shield, while Perälä played three successive islands and failed to develop his board. He played Worldly Counsel for one, but didn't find a plains. He made a Tidal Visionary and passed it back. Pollock brought his Acolyte again, but had no action.

Perälä finally found a plains, and brought out Coalition Honor Guard. Pollock let it happen. He untapped and kicked up a Rushing River, trying to slow Perälä down with a clearly substandard draw. Perälä came back with the Visionary and a Disciple of Kangee. Pollock drew and just shook his head. An unkicked Lancer from Perälä met a Tribal Flames, but Silver Drake presented a bigger problem.

Pollock finally began to find troops of his own. He made an Aurora Griffin. Perälä swung, and brought out the Honor Guard again. Pollock took it down with Lightning Dart and the Griffin to circumvent the Visionary. However, he was behind and racing three against four. He tried for a Benalish Trapper, but Perälä had Jaded Response.

From there on in Perälä took the reins. He bounced Angelic Shield with Urborg Emissary and Fact or Fictioned into Dromar's Charm over Aurora Griffin and Dead Ringers, while Pollock twiddled his thumbs. A Pollen Remedy saved the Emissary during combat, and when Pollock finally blew the Shield to bounce the Silver Drake he used the Charm to remove the last blocker. Both players had Jaded Responses, and Pollock expired a turn later.

The last card in his hand was the Questing Phelddagrif he'd held all game. Double mulligan makes it hard to win.

Perälä mulliganed in game two, and Pollock came out strong with Benalish Trapper and Sparring Golem. Perälä came back with Visionary and Tower Drake. Pollock hit for two and added Sunscape Familiar and Angelic Shield. They traded hits.

Pollock moved ahead in the race thanks to his Trapper. Perälä cut that jazz short with a kicked Urborg Emissary. Pollock replayed the Trapper and tapped out for Coalition Honor Guard. Perälä cut him off at the knees with Dead Ringers on the Honor Guard and Trapper. Angelic Shield made the save, but the damage was considerable.

Pollack continued to drop beats, replaying his Trapper and adding a mighty Sea Snidd. The ground stalled for two turns. Perälä took the battle to Pollock with Vodalian Hypnotist. Pollock hastened to empty his hand of Stormscape Familiar. He got more beats in while his tapper kept the Tower Drake at bay.

Perälä drew Dromar's Charm, and fustigated the tapper. His Visionary made sure that Jaded Response stopped a Voice of All from Pollock. Aurora Griffin secured his place in the driver's seat. He pushed his Emissary in the way of an incoming Golem from Pollock, taking three from the Snidd.

Pollock struggled gamely. He made a Dream Thrush and sent the Snidd again. When Perälä passed the turn uneventfully, Pollock pounced. He kicked Jilt, smashing the Griffin and bouncing the Tower Drake. His assault knocked Perälä to three and took down the Hypnotist.

Perälä replayed his Drake and added a Coalition Honor Guard, his abundance of white mana preventing further attacks. For two turns they stared at one another, accumulating forces while the Snidd and Thrush kept Perälä off blue mana.

Perälä found a third island, and threw down a kicked Vodalian Serpent. Pollock started chump blocking. When he was down to just the Griffin and Snidd he drew a card that made him glance upward in gratitude. He dropped the forest he'd been holding, kicked up a Rushing River on the Honor Guard and Serpent, then aimed Tribal Flames at Perälä's head.

Perälä was surprised to lose the game he thought he'd won. With three minutes remaining on the clock, the two shook hands and called it a draw. Pollock confessed that the matchup was a lot closer than he'd anticipated, with plenty of tricky card interaction on both sides.