Round 20: Pride on the Line

English and Scottish national teams have a natural rivalry that would be put to the test in this feature match. Neither of the teams are in contention for the team finals, but a win here could still mean additional money and, more importantly, serious bragging rights.

The draft seemed to go reasonably well for both sides, although after the decks were built the English were convinced of a loss. In particular, Sam Gomersall's Dimir deck only had seven creatures and was forced to play four Stasis Cells as well as some other questionable cards. 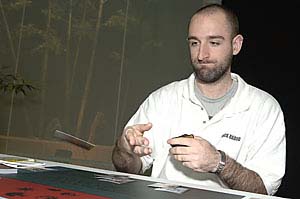 Sam Gomersall, with pride on the line.

Before the match, Gomersall noticed Randy Buehler (he who decides the feature matches) wandering around nearby.

"I hate you! We're gonna get destroyed, I hate you," Sam shouted.

Randy sensed a story and walked over for a Podcast update.

A choice tidbit from the short interview: "This one's for all the pride, and we're not gonna have much left after this."

Sam turned to his opponent, saying, "How good's your deck, 'cause mine's a bag of wank."

"Mine's alright I think," came the reply from Nick Taylor.

Sam shook his head. "I don't think I've ever gone 6-11-1 in an event and gotten three feature matches."

Gomersall chose to play and led with turn-two Lurking Informant. Taylor had Roofstalker Wight; when he attacked, Gomerasall blocked and then milled a Peel from Reality off the top of Taylor's deck. His next two creatures were Terraformer and Carrion Howler, both of which found themselves enchanted by Stasis Cells.

Taylor then knocked out his opponent's hand with Consult the Necrosages and copied Lurking Informant with Dimir Doppelganger. When his next two plays were Duskmantle, House of Shadow and Vedalken Entrancer, Gomersall's chances of winning this game dropped to near zero. It didn't help that Taylor kept milling spells with his Informant and then Gomersall would draw a land. 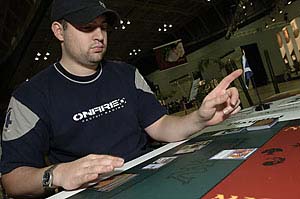 Taylor had the keen ability of not drawing just land.

Finally, Gomersall drew into the perfect card: Compulsive Research. When he cast it, what did he peel off the top of his deck? Three more lands. Nice.

Looking at his meager deck, Sam gave up. He looked forlornly at the cards he'd drawn and counted them up. "Thirteen lands, one creature."

As is customary in Team Rochester, no one made any changes to their deck for Game 2.

Gomersall chose to play again and Taylor started off with a mulligan. They reversed their starts from last game, and Gomersall attacked with a Wight into Taylor's Lurking Informant, but Taylor wasn't willing to trade. Sam added his own Informant.

Taylor, despite being stuck on three Swamps, used his Informant on Gomersall. Even stranger was that he chose to mill an Island, given that Gomersall hadn't missed a land drop yet. Gomersall returned the favor and also milled an Island, keeping Taylor as screwed as possible.

Taylor played a Roofstalker Wight, but fell further behind when Gomersall played out Sewerdreg, then performed some Compulsive Research and Darkblasted the Wight. He attacked with the team and, when Taylor blocked the Wight with his Informant, used Dizzy Spell to keep his Wight around. Taylor used his Informant on himself this time and found an Island, which enabled Terraformer.

When Gomersall transmuted Shred Memory into Last Gasp, Taylor realized it was hopeless and gave up.

"So I just have to screw you savagely. Good to know," chuckled Sam.

Gomersall kept a one-land hand on the draw as it had two Signets. He peeled a second land in time and one-upped Taylor's Roofstalker Wight with a turn-three Vedalken Entrancer. Taylor summoned Carrion Howler.

Sam used Compulsive Research and debated what to discard, looking at six spells, Island, and Dimir Signet with four mana sources in play. He eventually discarded Sewerdreg and Stasis Cell and added the Island and Signet to his board. Taylor cracked in for six with a flying Wight and the Carrion Howler. Gomersall blunted the attack with Stinkweed Imp but didn't have the mana for any other plays.

Meanwhile, Richard Moore had taken his first game on the back of Razia, Boros Archangel, so England was looking to be in decent shape.

As Taylor considered his next play, Gomersall wondered aloud, "What the hell do you have in your hand? [Infinite] Swamps?" Taylor indeed added a fifth Swamp and then Consulted the Necrosages to draw two cards. Sam untapped and transmuted Dizzy Spell for Disembowel and passed the turn.

Taylor untapped and lapsed into thought with six Swamps and an Island in play. He summoned Snapping Drake and Lurking Informant, then on his next turn used Keening Banshee to remove Stinkweed Imp. Snapping Drake, Wight, and Carrion Howler charged in to the red zone. Sam tapped all his mana and Disemboweled the Snapping Drake floating a black mana from a Signet, despite having Entrancer in play. Somehow Taylor walked right into it regardless and paid a life to pump his Howler. Darkblast took it down. 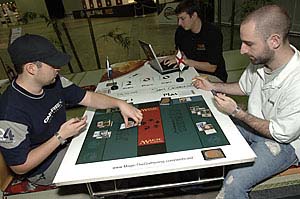 And a mighty blow was struck for Scotland!

"Man! Everything," he sighed.

Darkblast took down the Wight and Stasis Cell locked down Lurking Informant. Taylor then tried for an Entrancer of his own but Sam had a second Disembowel. Keening Banshee reduced Gomersall to 8 life and Taylor placed down Tattered Drake. Sam checked his graveyard.

"I'll dredge…and then, probably lose," he predicted as he dredged up Stinkweed Imp. When he dredged again for Darkblast to kill a Roofstalker Wight the next turn, Taylor saw his opening and cast a devastating Psychic Drain for 7. With only eight cards in his library, Gomersall conceded the match.

His spirits were lifted however when Mark Knight came over and announced that he'd won his match. They both turned their attention to Richard Moore, who was up a game but in a precarious position in Game 2, at two life against Ben Sanders's Boros aggro deck. Luckily he had a Ghost of the Innocents in play.

Just as I sat down, Sanders announced an alpha strike with four creatures hoping to use Rally the Righteous to kill Moore, who only had three blockers. Moore figured it out though and only left Courier Hawk unblocked. Sanders played his spell regardless and out of nowhere Moore conceded the game.

It turned out he incorrectly thought he was dead to the attack. In any case, Sanders had a Galvanic Arc in his hand that would have finished him off and the match was evened 1-1.

I left for a bit but when I returned to the Feature Match area Moore already had Hammerfist Giant, Razia, and Ghosts of the Innocent in play, as well as a Fangtail. Sanders had his own Fangtail, two Veteran Armorers, a Courier Hawk, Conclave Phalanx and Stoneshaker Shaman. Sanders had just ended his turn and Moore got up to ask the judge a question away from the table.

We waited for awhile while the judges conferred. "Oh so you've asked a difficult question. A Master Warcraft question I suppose," Sanders commented, referring to the fact that they'd both picked up copies of Master Warcraft during the draft.

Razia attacked for four turns before Moore decided to go for it yet again. He attacked with the team (except for four Saprolings) and cast Bathe in Light targeting Razia. Within a few seconds he realized that he'd messed up, as Sanders had two colors of creatures in play and would be able to block to stay alive. Sanders thought about it but decided not to use his own Bathe in Light to counter Moore's, and he blocked with Fangtail and fell to 1.

Sanders untapped and played out Sell-Sword Brute and Flame-kin Zealot, then attacked with his team and used Bathe in Light to give protection from green. Razia blocked and Sanders was only able to deal three, since the +1/+1 from Flame-kin Zealot didn't help his 2/2s deal any more damage. When he realized the attack wasn't lethal he conceded the match.

Despite their misgivings, the English took the match and kept their pride, as well as picked up nine points in the team standings race.