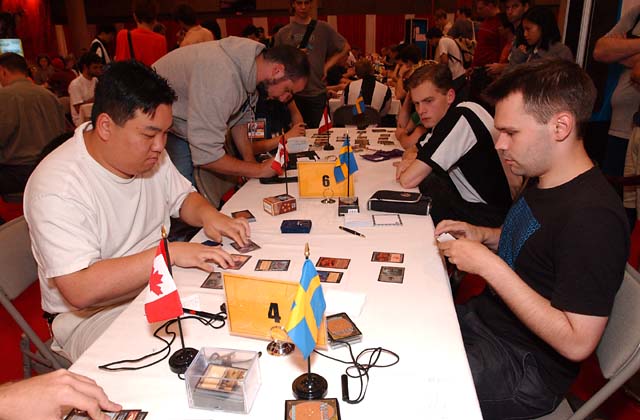 Gab's playing red-black, as is Tomi, but during the draft Tomi picked up a few Acolytes to make the matchup more interesting. Terry had to put an accent on the green cards, to avoid as many Acolyte issues as possible, or at least so he claimed. Tomi elected to draw first, and both players keep their hands. Terry played a mountain and Bloodfire Dwarf, while Tomi had a plains. Gab attacked with the Dwarf, then played a swamp, and passed the turn. Tomi's second land was a mountain, and Terry got to play another swamp and a Quirion Druid before Tomi got a spell in edgewise. Tomi then played a swamp and Caldera Kavu, and Terry attacked with both of his creatures, offering the trade with the Kavu, dropping Tomi to fifteen life. Terry then played another mountain and an Ancient Kavu, and Tomi then played an Obsidian Acolyte and immediately put Squee's Embrace on it. Terry attacked with his Kavu, dropping Tomi to twelve life, and played a mountain and Duskwalker, with kicker.

Tomi attacked with the Acolyte, dropping Terry to seventeen, and then played a swamp and a Firescreamer, holding the Duskwalker off for a turn if needed. Terry attacked with the Duskwalker, Ancient Kavu, and Bloodfire Dwarf, and the Kavu and Dwarf got through, while the Duskwalker and Firescreamer bounced off of each other... and dropped Tomi down to eight life. Terry then played a swamp and passed the turn. Tomi attacked with the Acolyte again, and Terry took it, going to fourteen. Tomi played another mountain and passed the turn. Terry played a mountain and ended his turn without an attack, for the first time in the game. Tomi attacked with the Caldera Kavu, and Terry chose not to block, and the Kavu dealt a mere two points of damage to Terry. Tomi played an Angelfire Crusader, and Terry played a swamp, his attack still halted. Tomi untapped and attacked with both the Crusader and the Caldera Kavu, and Terry chose to block Ancient Kavu to the Caldera Kavu, and the Bloodfire Dwarf to the Angelfire Crusader. Both of Terry's creatures were dying, and so he sacrificed the Dwarf after damage was on the stack, and after Tomi played a Morgue Toad he used a Singe to kill the Crusader. Terry untapped and played Phyrexian Rager, then cast a kicked Pouncing Kavu and immediately attacked with it.

Tomi blocked the Kavu with the Acolyte and Morgue Toad, then sacrificed the Toad to Singe the Kavu, making it black and allowing the Acolyte to survive long enough to kill it. Tomi then mana-burned for one thanks to the unspent blue mana, then untapped and cast Recover on the Caldera Kavu. Tomi then contemplated the attack, and passed the turn. Terry cast a second Rager, going down to ten life, then passed the turn. Tomi attacked with the Embraced Acolyte, and Terry had no choice but to take it and go to seven life. Tomi then played a second Acolyte, and a Caldera Kavu. Terry attacked with all of his creatures, and Tomi blocked the Firescreamer to Duskwalker, Caldera Kavu to Quagmire Druid, and Obsidian Acolyte to Phyrexian Rager. Firescreamer and Duskwalker applied lethal damage, and the Acolyte went unused, resulting in the Duskwalker and Quirion Druid trading with the Firescreamer and Caldera Kavu. Terry tried an eight-point Ghitu Fire, and Tomi had the Pollen Remedy, with the kicker letting him survive at three life. Terry played Volcano Imp and passed the turn; Tomi attacked with the two Acolytes to end the game.

Tomi played Recover on his Angelfire Crusader, then a mountain and Squee's Embrace on the Caldera Kavu. Terry played Quagmire Druid, and passed the turn. Tomi played a third swamp and the Angelfire Crusader, and was finished for the moment. Terry played a mountain and nothing else, while Tomi played a fourth swamp and attacked with Caldera Kavu, which Terry didn't block. Tomi pumped once, resolved it, then a second time, applying six damage to knock Terry down to thirteen. Terry Magma Bursted at end of turn with kicker, hitting the Skeleton and Crusader, with the Skeleton regenerating. Terry untapped and attacked with his hordes, which killed Tomi without a hitch.

For the third game, Tomi had the choice, and in the first game he had chosen to draw first. For the third, knowing a bit more about exactly how this game was going to work, and chose to draw first again. Terry and Tomi wished each other a good luck, and at this point Canada was down a match, with the other unresolved match for Canada up a game. Terry had a mountain and first-turn Bloodfire Dwarf, and Tomi also played a mountain first. Terry attacked only to have the Dwarf killed by Singe, then played a swamp and was finished. Tomi played a swamp as well and likewise had no creature to play; Terry played a second swamp and Kavu Recluse. Tomi played a plains and Caldera Kavu, and when Terry attacked he refused to trade his good creature for his opponent's bad. Terry finished that turn with another swamp and a Phyrexian Rager, who so far had been very amazing for him. Tomi played an Obsidian Acolyte and did not attack, with a second plains with which to protect the Kavu. Terry turned the plains into a forest with his Kavu's special ability, and Tomi floated a white. Terry declared his attack, and the Kavu gained protection from white, then the Acolyte was killed via Singe. Terry played a Quagmire Druid to follow up that trick, and Tomi played another mountain and Angelfire Crusader.

Terry played another swamp and a kicked-up Duskwalker, then passed the turn to Tomi, and used the Kavu to deny Tomi his black mana during the upkeep. Angelfire Crusader attacked, and Terry didn't block, going to fifteen after Tomi pumped it fully. Tomi played a third plains and passed the turn, and Terry untapped only to Terminate the Kavu, attacking for seven with his black creatures, then played a Volcano Imp. Once again the Recluse denied Tomi his black mana, and Tomi played another plains. Terry attacked with his evasive creatures, and Duskwalker plus Volcano Imp reduced Tomi to six life. Terry played a Morgue Toad, then denied Tomi black mana, only to have Tomi play a mountain and nothing else on his turn. Terry attacked with all his creatures, and applied lethal damage after the Morgue Toad was blocked, but Pollen Remedy with kicker kept Tomi in this game for a little longer. Terry used the Recluse again, but Tomi had another Swamp, and cast a Zombie Boa. Terry untapped and attacked with all, and despite a problematic first game Terry pulled out the match. Victory for Team Canada and Team Finland now hinged on the match between Elijah Pollock and Jussi Perälä, where Elijah was still up a game and in a favorable matchup.