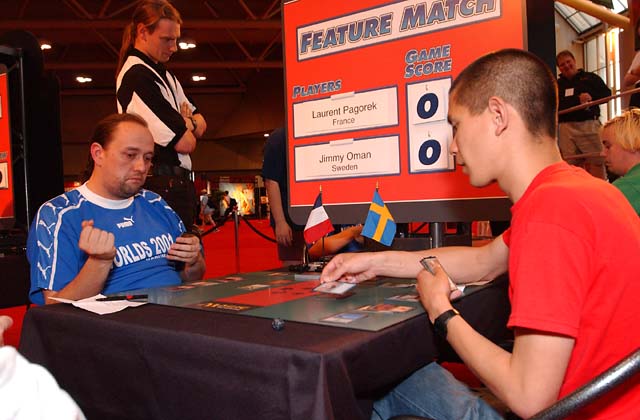 Both Jimmy Oman (Sweden) and Laurent Pagorek (France) had drafted u-w-r-b decks, with Dream Thrushes, Sea Snidds, and/or Slimy Kavu to smooth out their mana. That said, both players suffered in the color management department during this match. Four-color green, without the green, seems to be rather fragile. A good stiff wind would have blown either deck off its balance; this would come down to luck of the mana draw and the amount of playable removal each competitor saw.

Both players kept their opening hand for both games. In game one, Oman put on early pressure with a Goblin Legionnaire and Sea Snidd, while Pagorek defended with a Slimy Kavu and Aurora Griffin. In an excellent sixth turn, the Frenchman turned his opponent's sole mountain into a swamp during upkeep, then moved to his main phase, played his own Goblin Legionnaire, and sacked it to kill Oman's helpless Legionnaire. Since Pagorek's deck had a bit more removal in it (including a Benalish Trapper, and an Exotic Curse for the Sea Snidd), this gave a slight advantage to Pagorek throughout the game.

This took the air out of Oman's sails, and Pagorek built from there. An Urborg Drake later on fell to the pinging of both a Slingshot Goblin and Razorfin Hunter, and those board advantage cards eventually clinched the win. 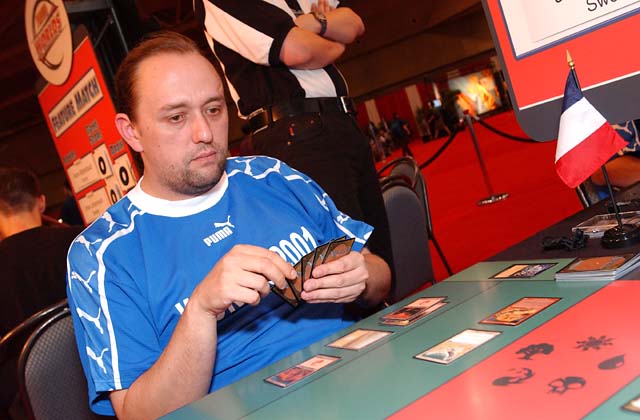 The second game lasted a little longer, as both players dabbled in a little "during-your-upkeep" land tag. Again, Pagorek changed the momentum by smashing a Goblin Legionnaire, this time with Jilt (while Oman was tapped out). A Coalition Honor Guard gave the Frenchman a slight board advantage. As several draw steps gave both players the lands they didn't need, there was plenty of time for Oman to recover; but he couldn't get the cards to stay on the board: the Dream Thrushes died to Slingshot Goblin, his Goblin Legionnaire (reborn off of Urborg Uprising) caught an Exotic Curse, and his Urborg Drake went down to Order.

After Pagorek played a Vodalian Serpent (kicked) and swung a few times, Oman tried a bit of his own removal - Dead Ringers. But just before he announced targets, he realized that one of them had to be Coalition Honor Guard, and there were no other pure white creatures. He scooped, and as this was the second match the French won, they could celebrate another team victory.