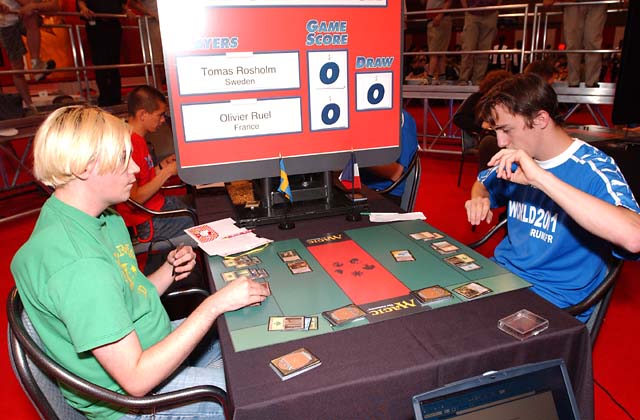 Halfway through the team challenge, France and Sweden were sitting towards the top of the charts, and the winner of this round seemed to be in a good position to play in the finals of the team challenge on Sunday. Team France is considered by many to be the best National team present, as all three members are players with significant Pro Tour circuit experience. Sweden is no lightweight either, though its players are definitely less well-known. Olivier Ruel is perhaps one of the two strongest players in France, the other being his brother Antoine, but Tomas Rosholm has got the advantage on him here, with better cards overall plus a few more bombs, no matter Olivier's Dragon Legend.

Olivier lost the die roll and was forced to play first by Tomas, and started off with a plains and forest while Tomas played a forest, swamp, and Quirion Elf naming blue. Olivier played a swamp and cast Primal Growth, fetching his island. Tomas played a mountain and Blazing Specter, attacking Olivier, who discarded a plains to its ability. Olivier untapped and played Captain Sisay, to which Tomas remarked, "That's trouble, right?" Tomas attacked again and Olivier discarded Primal Growth, and Tomas played Savage Gorilla. On upkeep, Olivier used Sisay's ability to fetch Dromar - the Banisher, then... did nothing, not having a sixth land with which to cast the Dragon Legend. Tomas took that opportunity to attack Olivier with all of his creatures, and Olivier used Gerrard's Command to untap his Legend and kill the Savage Gorilla, then discarded Overgrown Estate. Olivier then untapped and played a third plains, and the Banisher was in play.

Tomas played Wash Out: White, returning Olivier's permanents, and Sisay is discarded to the Specter during Tomas' next attack. Olivier merely cast it again, and Tomas had quite the humorous play, using Yavimaya's Embrace to make it his Dragon and attacking with the Specter again. With Olivier at just eight life and nearly depleted of nonland resources, he passed the turn, and Tomas attacked him again, just to have Olivier Recoil the Yavimaya's Embrace, now that the Quirion Elves (his second blue source) had attacked. Olivier discarded his Consume Strength and went down to five life, and Tomas finished his turn with a kicked Dwarven Landslide, hitting the forest and island in play. Olivier attacked, and Tomas grabbed the Dragon again, then attacked with the Specter, with Olivier conceding after his next draw. 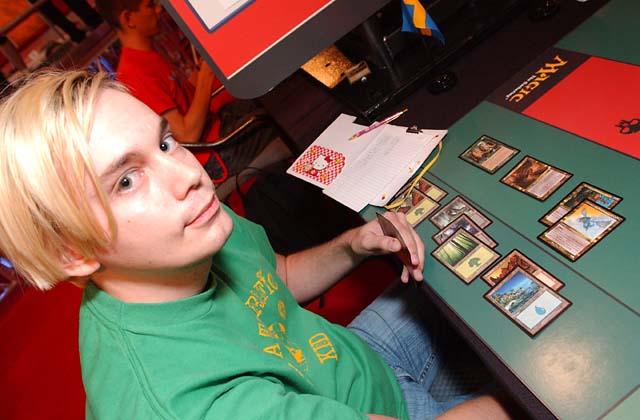 After thanking Dromar for his services, Tomas returned the Dragon to Olivier to play again, if he chose. Both players sideboarded for the next game, and shuffled a bit while Olivier tried to decide who should play first. Olivier asked Tomas what the Swedish word for "lucky" was, and Tomas informed him that it is "tur." If it's all about the tur, then at least Olivier wants to know what it is he should be asking for. Olivier made Tomas play first this game, to see if he can get as good a draw without as many cards. Tomas played a forest to start off, and Olivier a plains; Tomas played Quirion Elves, again naming blue, a potentially dangerous start to Olivier's game. Olivier played a forest and Llanowar Knight, while Tomas played a Penumbra Bobcat without playing another land first. Olivier played a swamp and attacked, and the Bobcat blocked the Knight, and Olivier tried to announce Consume Strength with the Knight as one of the targets, but has to back up and use Gerrard's Command instead; not only a worse play, but he has to mana burn for one with the black mana in his pool.

Tomas then attacked with the Bobcat token, and Olivier blocked, the token dying a fruitless death. Tomas played an island and Penumbra Bobcat, and Olivier a Razorfoot Griffin after playing a second swamp. Tomas played a second island and Kavu Climber, and Olivier played Slay on the Climber, drawing a card for the effort. Razorfoot Griffin attacked, dropping Tomas to eighteen, the first damage that game save for a point of manaburn. Tomas attacked back with the Bobcat, then played Shoreline Raider. Olivier attacked with the Knight and Griffin, and unfortunately Tomas knew about the Consume Strength, so Shoreline Raider blocked the Llanowar Knight, trading. Olivier followed this up with a Putrid Warrior and Amphibious Kavu, and Darigaaz's Caldera returning a swamp to his hand. Tomas played a second forest and used Temporal Spring on the Razorfoot Griffin, and after attacking with the Warrior and Kavu, with no blocks because of the phantom Consume Strength, and a life lost by both players, Olivier replayed the Griffin and his swamp from the turn before. Tomas played a third island and passed the turn, only to have Olivier attack with all three of his creatures. Tomas blocked the Warrior with his Quirion Elves, and Amphibious Kavu with Penumbra Bobcat, and Consume Strength pumped the Griffin and killed the Bobcat, making a token Bobcat. With another life mutually lost to the Putrid Warrior, Tomas was at six to Olivier's fifteen, and Primal Growth found an island before Olivier passed the turn.

Tomas untapped and played a forest, then passed the turn back over to Olivier. Amphibious Kavu and Razorfoot Griffin attacked Tomas down to two life, and Olivier used Lay of the Land to find a plains, but chose not to play it. Tomas played a Kavu Climber, drawing a card and conceding to the Razorfoot Griffin. 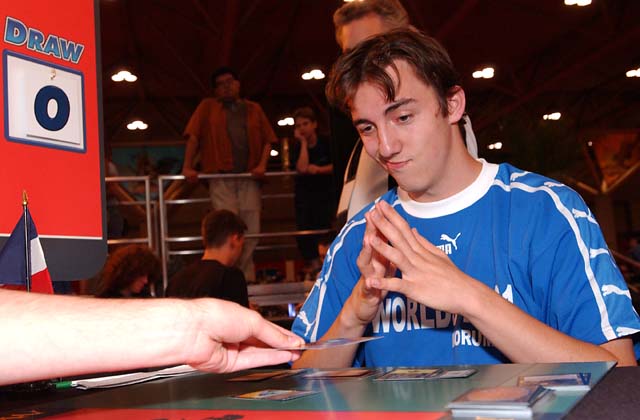 For this game Olivier has boarded in his mountain and Raka Sanctuary, with the belief that the game will probably go long enough to allow the enchantment to take control of the game. Olivier also put it in assuming that he would be made to play first, giving him enough of a tempo advantage that he might be able to exploit it with that card. Tomas confirmed that Olivier will have to play first, then learned that unfortunately France is up 1-0 in both of the other matches. Olivier considered his opening hand before deciding to keep it, and Tomas is forced to mulligan his hand. The second hand is keepable, and Olivier started with a forest and plains to Tomas's forest and Ana Disciple, which attacked and was followed by Tomas playing a mountain before passing the turn. At end of turn Tomas played Eladamri's Call, fetching Thornscape Apprentice, then untapping and playing said Apprentice, but no third land. Tomas played an island and Shoreline Raider, and Olivier attacked with the Apprentice; the bait was taken and Gerrard's Command killed the Raider, but still no third land from Olivier. Tomas played a second forest, having four mana of three different colors but not yet another spell, so he attacked with the Disciple, only to have Tomas attack back, then play a swamp and Amphibious Kavu.

Olivier played a plains and Amphibious Kavu, trying to empty his hand now that Planeswalker's Scorn could target Dromar twice, and Dromar killed the Kavu dead. Tomas's creatures attacked and Olivier Recoiled the Scorn at end of turn, and cast Dromar - the Banisher, but Tomas cast Life, and it was death that faced Olivier Ruel.