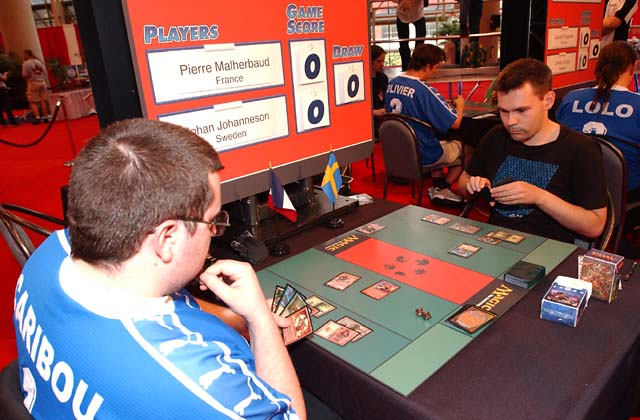 There's nothing quite as heartening as national champions pummeling each other with creatures. This match provided just that opportunity, with both players piloting red-green-black decks packed with monsters.

It was a slow progression for the two ostensible "aggro" decks. Malherbaud's Thunderscape Familiar didn't come out until turn three. Johannesson answered with Phyrexian Rager. Malherbaud came back with Lava Zombie, recasting his Familiar.

Johannesson made a Fires of Yavimaya, threatening ridiculous beats on the following turn. He accepted four from the Zombie and was suddenly faced with a turn-five Glade Gnarr. He considered his options before Terminating it and attacking for two. Lastly, he added an island and an Urborg Elf.

Malherbaud hit for five and bolstered his defenses with Voracious Cobra. This gave Johannesson enough reason to stay back for a turn. He made a Kavu Howler that got him a Glider. Malherbaud Terminated and swung with Cobra and Zombie. The Rager chumped the Zombie. Malherbaud brought more beats with Viashino Grappler. 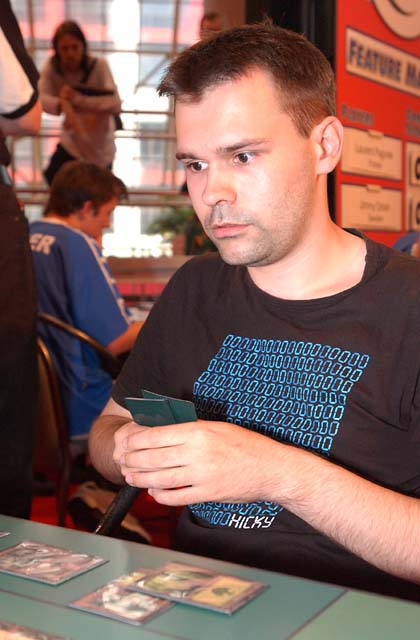 Johannesson tried again, this time with Caldera Kavu. Malherbaud came at him with the same two men. Caldera Kavu blocked and pumped, trading with the Zombie, and the Cobra met Terminate. This move would prove a trifle hasty. Malherbaud tapped eight and dropped his last card: Bloodfire Colossus.

Johannesson goggled. Malherbaud attacked all out, and the resulting damage was enough to put the Swede into kaboom range.

Malherbaud's Thunderscape Familiar came out on time in game two, and when Johannesson had to play a lair to get Phyrexian Rager in play, the added speed looked important. However, his Voracious Cobra wasn't the quick and brutal beats he needed.

Meanwhile, Johannesson gated in a Lava Zombie, and played ogres on successive turns. Malherbaud made a Caldera Kavu, but lost it to Johannesson's Explosive Growth. He made a Zombie only to have his Cobra Terminated.

Johannesson got through for six, losing his Rager to the Zombie. He dropped a replacement, as well as a Pincer spider. Malherbaud's face showed that he was hoping for a better game three. He pulled out all the stops, trading two-for-one for Johannesson's Zombie and making it up with Annihilate on his freshly-cast Glade Gnarr. Still, a turn later, he was behind two creatures to five. 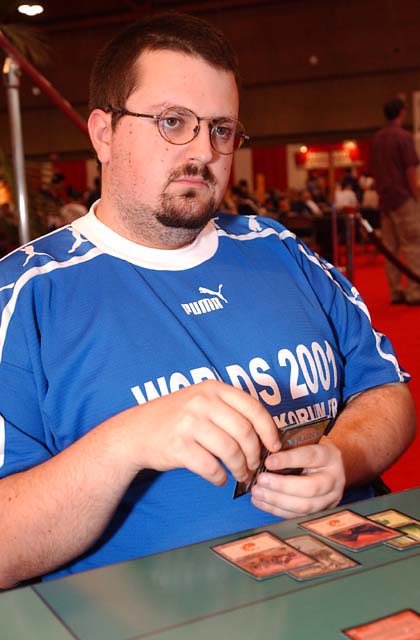 He evened the odds with Plague Spores, taking out Pincer Spider. Johannesson was reticent to sacrifice creatures for damage. He pushed through with his Caldera Kavu for four, played Fires of Yavimaya, and left it to Malherbaud. He, in turn, played Agonizing Demise on the defenseless Caldera Kavu, and blew up Morgue Toad and Phyrexian Rager with Magma Burst. Johannesson popped the Toad for mana, rescuing the Rager with Nightscape Apprentice. Malherbaud came in for four. The scores were ten to eleven in Johannesson's favor.

Johannesson drew and replayed the Rager, sending it for damage. He also dropped the Ravenous Rats he drew. For a long time neither player moved, building up troops. Malherbaud had a Might Weaver and Johannesson, a Firebrand Ranger.

On the third turn of inactivity, Malherbaud casually threw down Bloodfire Colossus. Johannesson had no witty rejoinder. Malherbaud untapped and sent it in solo against Johannesson's nine life.

Johannesson blocked with Ravenous Rats. And nothing else.

Malherbaud shrugged and gave it trample with the Weaver. Johannesson slowly realized the consequences of this act. He didn't have to wait long for the sweet release of death.