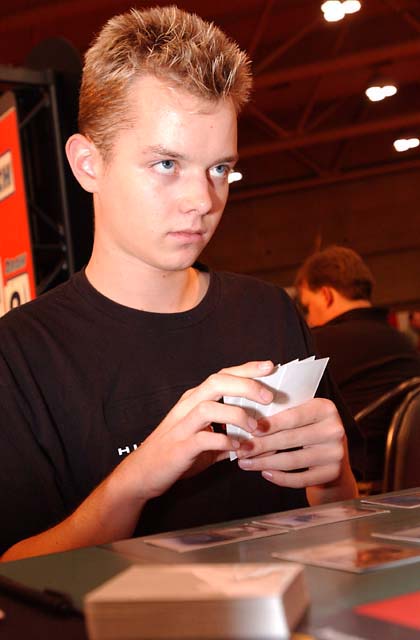 It's been a long week for the American team, but as the final draft round approached, they found themselves in a position no one had expected after the first day of competition. They were playing for a spot in tomorrow's team finals. In their way was the French team, who had just as much to gain in this final match as the Americans. The difference here was that American dominance in the team event is an accepted tradition, and nothing less than victory is expected. The 2001 American team certainly didn't want to go down in history as the second U.S. team to not win at Worlds. Meanwhile, the French had everything to gain, and not much to lose. The pressure was definitely on the American team.

Pagorek played first, and Hegstad started off with a first turn Stormscape Apprentice. A Spirit Weaver was summoned by Pagorek on turn two. Hegstad played a second island, and was either color screwed, or bluffing. Pagorek used Crosis's Catacombs on turn three to bring out Goblin Legionnaires, leaving an island untapped. The Spirit Weaver attacked, and got through for two damage. Galina's Knight was summoned by Hegstad, which left his only plains tapped. This allowed Spirit Weaver to get through for damage once again, and Pagorek cast Helionaut. Hegstad then tapped out on his turn to bring out Benalish Heralds.

Tidal Visionary was now played by Pagorek, who attacked for one with Helionaut. The Apprentice stopped the Helionaut on Pagorek's next attack step. The Legionnaires and Spirit Weaver attacked, and Heralds blocked and killed the Weaver. The Heralds were used on end step to draw a card, and Legionnaires were sacrificed to kill off the 2/4 "Book." Hegstad finally went on offense at this point, attacking with Galina's Knight. Pagorek summoned Sawtooth Loon, bouncing back Helionaut. Galina's Knight continued to block, and Pagorek wasn't too eager to block and trade with the Loon. He took two, and remained at a healthy sixteen life points. After the attack, Hegstad brought out a kicked Prison Barricade, and Cavern Harpy. Pagorek then played Raka Sanctuary, and Hegstad now needed to win in a timely manner.

As a result, it was now Hegstad's chance to go entirely on offense, as he sent Galina's Knight, the Barricade and the Harpy into the Red Zone, dealing six damage. He then played Whirlpool Drake, and drew three new cards. This was followed by Hegstad summoning Samite Pilgrim. Pagorek leaned over the table at this point and laughed a bit, looking at Hegstad's massive army. He decided to kill off the Apprentice with his Sanctuary. Pagorek cast Jilt with kicker, bouncing the Pilgrim and killing off the Knight.

This left Hegstad with a kicked Barricade, Cavern Harpy and the Drake in play. They all attacked on Hegstad's turn, and the Loon blocked and traded with the Drake. The other creatures got through for four damage, bringing Pagorek down to five life points. Hegstad played Probe with kicker, discarding two lands. Pagorek discarded Prohibit and Rushing River, and was left with two cards in hand. Silver Drake was then played by Hegstad, and Pagorek responded by making the Cavern Harpy red. Hegstad then bounced back the Barricade.

The Sanctuary shot down the Harpy for one now, because Pagorek only had the Visionary in play. The Harpy came back to Hegstad's hand in response. With a Silver Drake looming overhead, things looked bad for Pagorek, who then summoned Zanam Djinn. This would hold off the Drake, allowing Pagorek to stay alive. It also gave him a second creature, which would allow him to use Tidal Visionary tricks to shoot Hegstad's creatures for three.
Hegstad brought out Samite Pilgrim on his turn, followed by Disciple of Kangee. Cavern Harpy came back out, and bounced itself when Pagorek made one of Hegstad's creatures red in response. It was now Pagorek's upkeep, and he did not us the Visionary to make one of his permanents white. The Sanctuary dealt one to the Pilgrim on upkeep, but Hegstad kept it alive with Pollen Remedy. Pagorek then used Rushing River with kicker to bounce back the Drake and Pilgrim, leaving Hegstad with only a Disciple of Kangee in play. 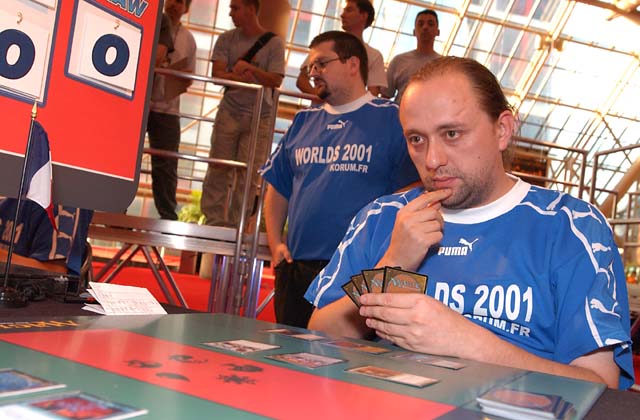 Hegstad now started to catch up, replaying Silver Drake, Pilgrim and a kicked Barricade. The Sanctuary shot down the Pilgrim, and this time, it finally died. Hegstad played Reef Shaman and Sparring Golem, but still could not get through the Zanam Djinn. Meanwhile, Pagorek did not see the play of turning one of his creatures white on upkeep, and kept shooting things for one when he could have been taking down one of Hegstad's creatures with each of his turns. There was the issue of Hegstad's Disciple of Kangee turning a creature blue in response, but if Pagorek did see the play, he would have bounced the Disciple back with Rushing River. This mistake became even more detrimental as the turns passed, since the game was at a complete stalemate at this point, and the Tidal Visionary trick could have won Pagorek the game long ago.

Pagorek did get a white permanent on the board when he summoned Dega Disciple, but Hegstad killed it off right away with Night. As the turns progressed, Hegstad kept playing smaller creatures, and was building up for one final attack to deal the last five points of damage to Pagorek, or was at least looking to draw a spell to take out the Zanam. Pagorek played a Razorfin Hunter, which could at least break up the stalemate. Hegstad decided this was the time to attack, and sent all his creatures into the Red Zone. Zanam Djinn blocked Silver Drake, Tower Drake blocked Disciple of Kangee, Tidal Visionary blocked Crusading Knight, and Razorfin Hunter blocked Prison Barricade.

After that war, Pagorek was down to one life point, and was left with the Zanam and the Tower Drake. Hegstad lost the Disciple and Silver Drake, but still had a large army in play. He then played Cavern Harpy and Reef Shaman. Pagorek untapped and played Guard Dogs, commenting that "It's not so bad against you." It didn't matter, as Hegstad won on his next attack.

Hegstad mulliganed his opening hand this game. Pagorek brought out a second turn Spirit Weaver. At this point, Hegstad saw that Blackwell had won to put the United States up 2-0 against France, and slammed down his second turn Samite Pilgrim with a triumphant yell. Pagorek summoned Tower Drake, and Hegstad brought out Standard Bearer. Living Airships came out on both sides. Hegstad then conceded, since his team had already qualified for the finals.