Round 22: Defending Your Turf

takes a very specific set of circumstances, but the Slovak Republic is within shouting distance of the team finals. First, America has to beat Norway, because if they draw, the best Slovak Republic can get is third. So if America beats Norway, then all the Slovak Republic has to do is win its match against Japan. Sounds easy, right? 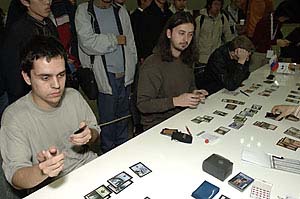 The Slovak Republic had a chance to make it to the finals.

Japan started strong with Takuma Morofuji going into Boros in the B seat, and Masashi Oiso into Dimir in seat C. The Slovak Republic also settled into their roles early, with Ivan Floch in seat A taking Boros, Robert Jurkovic in seat B picking up Golgari, and Marian Takac taking what appeared to be a match for Oiso's Dimir in seat C. This left Golgari open for Ichirou Shimura, who was more than happy to with a Savra, Queen of the Golgari as his center piece.

Then somehow the Slovak Republic's Marian Takac managed to draft a Golgari Guildmage, followed by a Selesnya Guildmage, and all of a sudden, there were three Golgari drafters in a row. Fortunately, it appeared the pack quality was going to support this unexpected turn of events. However, while the Golgari drafters shared around their Scatter the Seeds, Stinkweed Imps and Last Gasps, Takuma Morofuji managed to pick up four Galvani Arcs for his Boros deck, and Masashi Oiso took in a pair of Keening Banshees and two Brainspoils to round out his position as the only Blue drafter at the table.

Leaning over the shoulders of the players as they built their decks, a stark contrast in mood was revealed. As Japan methodically discussed mana curves and balances, the Slovak Republic could be heard arguing with each other over what I can only assume was the quality of their decks.

I picked this up where blisterguy left off as I walked over to discuss the decks with the Slovak team. I had just looked at the Japanese decks and they seemed ridiculous. There were apparently five Last Gasps, five Galvanic Arcs, and three Keening Banshees at the table and the Japanese had nine of the possible 13 removals working for their cause. They seemed very happy with their decks and looked relaxed and loose.

The Slovaks, on the other hand, looked as if someone had thrown a live grenade into a room of beloved family members. They couldn't jump on the top of their decks quickly enough and tried to shoo me away.

"You don't want to look at these!" they warned me.

Ivan Floch was facing off against Oiso and could only hold his head in his hands as he looked at the four-color monstrosity in front of him. "I can take Oiso if he gets no more than two lands."

Robert Jurkovic seemed confident that he could take out Takuma Morofuji with his green-black deck. Marian Takac looked up from his deck registration sheet and agreed with Ivan's assessment, "I think the same about my match ... but only if you change that to one land."

Jurkovic seemed to know what he as talking about when he quickly overran Morofuji in Game 1 of their match with a horde of tokens, imps, and wurms. All Morofuji had to put in the path was an Arced Goblin Spelunkers. He had mustered Ordruun Commando but it was taken out by a Keening Banshee. In the Oiso match there was a Vedalken Entrancer in play on Takac's side of the board, but except for that he was out of action and hoped to ride the mill plan to victory. 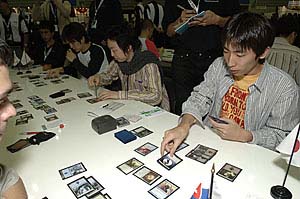 Oiso took care of business in his match.

Oiso had killed pretty much everything else that Takac threw out there with either Clinging Darkness, Last Gasp, or a pair of Keening Banshees. He dug through his deck - ignoring the Entrancer - with Compulsive Research and Bloodletter Quill until he found Halcyon Glaze and bashed Takac to death. Ivan also got out to a quick win over Ichirou when his white red dudes showed up en masse while Ichirou's lands did the same.

Oiso quickly dismantled Marian in the second game with a similar barrage of critters and removal. Marian's deck delivered about as well as it could hope to when he played both Loxodon Hierarch and Dimir Guildmage on turn five but Oiso Last Gasped one and Clinging Darkness-ed the other. The key to the match was actually an Undercity Shade that Marian could find no answer to.

On the far side of the table Ichirou looked like he was going to even things up. His Selesnya Evangel was going and he Last Gasped the Viashino Fangtail that threatened to gum up the works but Ivan was just dekeing him and had the far deadlier - in this matchup anyway - Wojek Embermage on the next turn. Woebearer Demon promised to whittle down Ivan's mounting squad but all it ended up doing was locking Ichirou under his own Stinkweed Imp for a couple of turns while Ivan's deck kept churning up critters that doubled as removal like Sparkmage Apprentice. Suddenly the match was tied.

Morofuji mulliganed to start off his Game 2 and it looked like he was going to have to go to five - his hand had five lands and Galvanic Arc - but he kept it and hoped for the best. Robert tried his best to punish the land-heavy draw but Morofuji slowly drew out of his land pocket and dominated the board with Oathsworn Giant, Sunhome Enforcer, and a Fangtail. The game dragged on and on and when it was done Morofuji did not have a way to win, but didn't have to -- Robert ran himself out of cards. There were only six minutes left in the match. 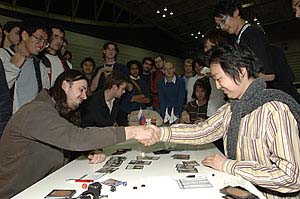 The match ended in a draw, which was good enough for Japan.

Robert did not seem to understand the time constrictions he was under and took almost two minutes to sideboard and shuffle his deck. Morofuji was simply playing not to lose at that point and that is exactly how it played out with neither player able to deal 20 in five minutes plus five extra turns.

The match was a draw and that was enough to get Japan into the finals of the team competition against the American team - a team they smashed handily one round earlier.