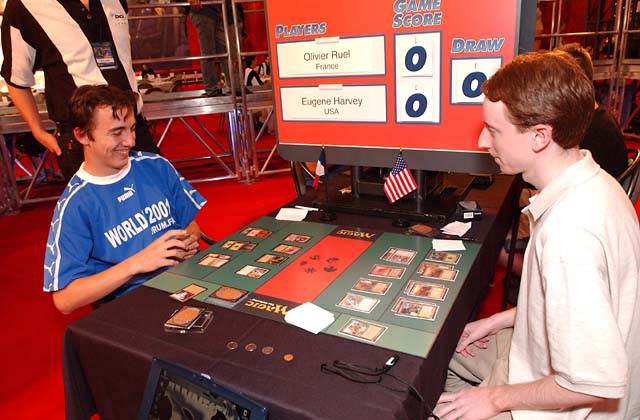 "You know, a lot of people are picking France to win. Does that intimidate you?"

Eugene Harvey had to smile at this half-joke from the ever-charismatic Olivier Ruel. They were a mismatched pair. The effusive and expressive Ruel is a veteran of the pro circuit. Harvey is a reserved player who debuted at this years US Nationals, coming out of nowhere to make the team. This match is for most of the marbles, as the winning country will appear in Sundays finals.

Ruel mulliganed, but had won the flip and given Harvey the lead-off position. Harvey made good use of it, using Lay of the Land to fix his mana and summoning a Thornscape Familiar. Ruel was not idle. He dropped Ana Disciple and Crimson Acolyte. But when Harvey played out Lashknife Barrier and Thornscape Apprentice Ruel was visibly shaken. 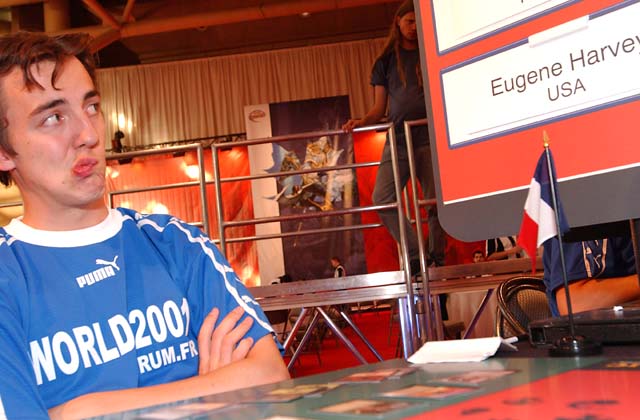 He had no play on his third and fourth turns. Harvey had meanwhile brought out a Coalition Honor Guard and thumped him good. Rith's Attendant joined his amateur mob. Ruel used Terminal Moraine to fetch a swamp and bring his Disciple online. He added a Thornscape Familiar to the mix and the beats slowed. Still, after the Attendant clobbered again, he was at nine.

He played a mountain and tapped out for Darigaaz, the Igniter. Harvey was unconcerned. He tapped it at end of turn and brawled for five. He made no play and sent the turn back to Ruel. Ruel declared his attack phase and Harvey dared him to swing with his guys. He thought better of it, and used Hypnotic Cloud to remove Harvey's hand. It didn't matter that Harvey pulled Gaea's Might off the top to take the game. It was his in the long run regardless.

Harvey led again, and played a first-turn Thornscape Familiar. Ruel matched him with Necra Disciple, and then turned the tapper off with Standard Bearer. While Harvey collected colors of mana, Ruel dropped Pincer Spider and started swinging. Harvey resigned himself to playing Agonizing Demise on the Flagbearer. This freed up his Scorching Lava for Ruel's next play of Glimmering Angel. Ruel spilled guys on the board, adding Quirion Explorer and Thornscape Familiar. Harvey shut them down with Penumbra Kavu. He also cast Rith's Attendant, grabbing the ball and running downfield. For two turns he crashed Ruel's party. Ruel took the damage, forgetting to use his Necra Disciple to save himself some pain. He did manage to dispatch the golem with Gaea's Might.