Round 22: More than Money on the Line

is possibly the most pressure-filled match of Antonino De Rosa's Magic career. Sure, he's won multiple Grand Prix titles and even became the U.S. National Champ earlier this summer, but I don't think he's ever had a single match with so much money riding on the line - and he's never had the opportunity to play on a Pro Tour Sunday.

A win here would vault him up to Level 5 status, giving him $500 more money per Pro Tour appearance plus paid travel to sites like Honolulu, Prague, Kobe and Paris next year. It would also mean that he'd earn $250 per Grand Prix appearance, a not inconsiderable sum for an individual who tends to really enjoy Grand Prix travel. And this is all above and beyond the extra prize money he would earn simply from finishing first or second in the Team competition. 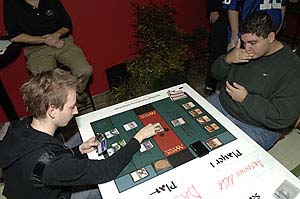 De Rosa and Nygaard knew a Sunday spot was on the line.

The pressure on teammates Jon Sonne and Neil Reeves is nearly as intense. Reeves and Sonne are both aware of how much this means to De Rosa and want to come through for their friend. Additionally, this particular version of Team U.S.A. has been called one of the strongest in years and anything less than a finals appearance would be disappointing to all of them.

Team Norway has been a bit of a surprise this weekend. Nikolas Nygaard finished 10th in the individual competition and former Pro Tour winner Eivind "Fashion Fiend" Nitter (not a quitter) looks as if he's back on his game. A win here would get the Norwegians into the finals as well, so they too had a ton riding on the results.

The draft received mixed reviews from both sides, a common theme in Team Rochester. The Americans felt they drafted better, but the Norwegians opened stronger cards. From a slightly more objective perspective, Jon Sonne's match against Tommy Hammer looks pretty heavily in Sonne's favor. Two Netherborn Phalanxes against a Selesnya deck are never what you want to see as the green-white player.

Reeves's matchup against Nitter looked to be a push, and both teams felt that Nygaard definitely had the advantage against De Rosa, with De Rosa getting so frustrated at one point during the draft as to start consistently hating away cards from the other two matches just to give his teammates a better chance. The Boros cards were few and far between in this particular set of packs.

De Rosa kept an opening hand with five lands and two early drops, though one of the lands was Sunhome, giving him a strong threat that would be difficult to deal with. Nygaard kicked things off with a turn-two Signet on his side and then turn-three Stinkweed Imp. De Rosa's problem was that his five-land keeper drew into three more consecutive lands, giving him zero pressure on the board and nothing useful in hand. Nygaard threw down a Snapping Drake to keep Stinky company, but was stuck on lands and could only muster a Terraformer a turn later, while De Rosa finally drew a non-land card, Oathsworn Giant.

Nygaard began the aerial beatdown with the Drake, but then curiously only sent in his Terraformer a turn later, leaving the Drake on D. He also Consulted with some Necrosages, but those stingy bastards still wouldn't cough up a fourth land for him. The Giant entered play for Ant and got rowdy a turn later with Viashino Slasher accompanying him, making the life totals 14 to 12 in favor of Nygaard, but De Rosa had a growing army, summoning Greater Forgeling and Boros Recruit for his army, set to engage Nygaard's fresh Dimir House Guard. 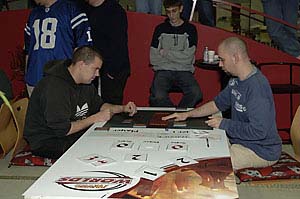 Sonne helped the U.S. cause by winning his match.

An attack from the House and Drake dropped De Rosa to seven and then Peel from Reality blunted De Rosa's next attack, sending the Giant and Nygaard's Terraformer back to their owner's hands and basically guaranteeing Nygaard would win the race. One more attack from Nygaard and yet another land drawn by De Rosa put the U.S. champ in a 1-0 hole. It wasn't all bad news for him though, since both Sonne and Reeves reported in that they had already won their first games.

De Rosa kept a two-lander with a Signet and no Mountains this time, but most of the spells in it were white so it seemed solid, provided he plucked more mana. He missed land drop for turn three, but found a mountain on turn four and summoned Screeching Griffin to battle another Terraformer for Nygaard. Then it went Snapping Drake for Nygaard, Sandsower for De Rosa, Stinkweed Imp and a House Guard for Norway, Viashino Fangtail and Courier Hawk for the United States. The board was now crowded with both evasion and utility creatures with De Rosa quickly at 7 life and Nygaard at a healthy 15.

At about this point Sonne won his match and a member of the crowd quietly reported that it looked like Reeves would win as well.

"Man, my teammates are so good and I am such stains," quipped the suddenly chipper Italian-American. "I am sooo lucky!"

Peel from Reality countered a Faith's Fetters and Nygaard pounded Cerulean Sphinx onto the table on his turn, tapping out to try and finish De Rosa off. 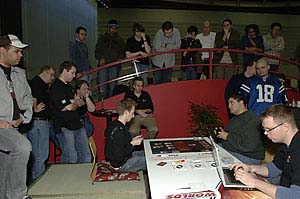 The crowd gathered as De Rosa's teammates put away the match.

Boros Fury Shield on a blocking Cerulean Sphinx dropped Nygaard to four and then correct blocks plus a tap of Nygaard's last blocker via Sandsower and company evened the match at one game each.

Both players flooded on lands, but it was De Rosa who drew more spells, giving Team U.S.A. a clean sweep and a reservation to play Team Japan on Sunday. Will the rematch of Round 21 be revenge for the Americans or will Japan exert their dominance on the Magic world in yet another fashion? Tune in to find out!