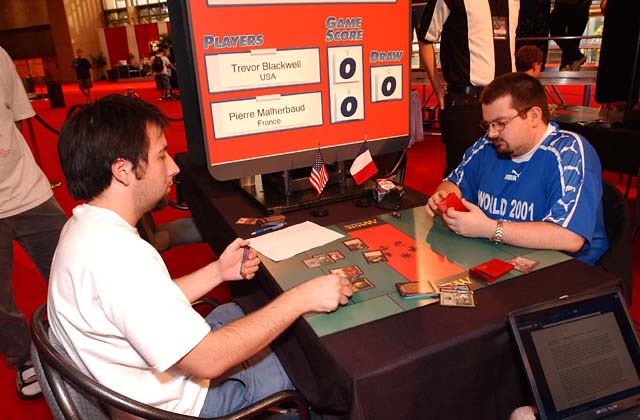 Due to their current standings, either of these teams can win the match 2-1 and make the top two, so outside of the possibility of there being a draw in this match, one of these two teams should be playing in the finals on Sunday, while the other will be wondering where it went wrong. Trevor Blackwell is the National Champion, and is sitting in the C-seat for his team's draft, which according to the popular draft strategy that seems to have been picked up by the professionals today makes him and his opponent, French National Champion Pierre Malherbaud, the black-red players for their team. The mach begins with the die roll, allowing Pierre to play first, but also denying his request to change the sides on the playmat, since that is now Trevor's decision, and he liked it just fine where it was. To start, the players shuffled up the cards, but they were immediately intercepted for a deck-check, giving the competitors a bit of time to watch their teammates while the judges do their duty.

After quite a bit more shuffling on both sides, Pierre had to be replaced by Mark Rosewater for some riffle shuffles, as his ability to shuffle without sleeves was messy. Pierre took a mulligan playing first, which can get very messy very fast, and by the time they were ready to play anything at all Eugene Harvey had already won the first game of his match, but this could be due to the second mulligan the Frenchman was forced to take. Pierre started with a mountain and swamp, to Trevor's two swamps and Nightscape Familiar, and Pierre played a forest and passed the turn, taking a damage from Trevor, who played a mountain and passed the turn. Pierre had a second mountain and Mire Kavu, on his fourth turn, and Trevor a third swamp and Phyrexian Slayer. Mire Kavu attacked for four, then Pierre played a second swamp and Sparkcaster, dealing an extra damage to Trevor for the turn. Trevor untapped and attacked with the Slayer, and a fourth swamp didn't help add any spells to Trevor's side of the board. Pierre replayed the Mire Kavu without attacking, then played a third swamp and passed the turn. Trevor had a kicked Magma Burst at end of turn, killing both the creatures and putting a use to those excess swamps, and Trevor untapped and attacked for three points, then played a Geothermal Crevice, suggesting it might be smooth mana from here on in.

Pierre had no play on his turn, and the Familiar and Slayer attacked for another three points, then Trevor had an Urborg Skeleton, played with kicker, which was not what we expected when he finally got two red mana. Pierre continued to have nothing to cast, and Trevor attacked with his Zombies and the Slayer, then played yet another swamp. Exotic Curse killed off Trevor's Phyrexian Slayer, and Pierre played another forest to add to his real estate. Trevor attacked with the two one-power regenerators, dropping Pierre to five life, and all he had to add to the game was another mountain on his turn. Pierre cast a Caldera Kavu on his next turn, at long last, and revealed that his problem so far was the Lava Zombie he had been unable to play at all. Trevor considered his options when the Zombie was cast, and Trevor called over a judge to confirm or deny what he expected would happen when he attempted the response of his choice.

The Zombie came into play with no issue, but Trevor used Soul Burn to kill Pierre rather than play around with the three Zombies on the table.

Pierre resolved to play first and mulligan less for his next game, and got to do both of those things, keeping his initial hand, as did Trevor. Pierre started with a forest and mountain, casting a second-turn Quirion Sentinel and making a "pink mana," burning for one, while Trevor again had two swamps. Pierre played a second forest and Caldera Kavu, and Trevor's next turn saw him play a forest and Nightscape Familiar. Pierre's creatures attacked on the next turn, reducing Trevor to fourteen, and Pierre had a fourth mountain but no more pressure to add to Trevor's position for the moment. Trevor likewise had nothing to play on his turn, and Pierre played a swamp and Exotic Curse on the Familiar, allowing him to get through for another four points unhindered. Trevor played a mountain and Thunderscape Familiar, but Pierre had a sixth land and Plague Spores to drive the nail in the coffin of Trevor Blackwell. With nothing great coming off the top, Trevor played Phyrexian Battleflies, and Pierre ran into them, killing Trevor with an Explosive Growth on the Caldera Kavu.

Trevor gets the option to play first this time around, and doesn't let it slip through his fingers. Trevor kept his opening hand while Pierre fretted over his, taking a mulligan and hoping it doesn't work the way his last mulligan did. Fate struck ill for Pierre, however, and he mulliganed a second time... for the second time. Trevor played a swamp, as did Pierre, and when Trevor played a mountain Pierre matched him there as well. Trevor had a second swamp and Kavu Scout on his third turn, and Pierre played a forest and Penumbra Bobcat, once again having all three land types on the third turn after his double mulligan. Trevor played a second mountain and cast Maniacal Rage on his Scout, then attacked Pierre, who took four damage resentfully but somberly.

Pierre drew for the turn and had a mountain to play, and Caldera Kavu as well. Trevor is interrupted by Mark Rosewater for a second, to conform with the playmat guidelines, then Trevor made his mind and attacked with the Scout, which was blocked by both of Pierre's creatures. Trevor assigned lethal damage to both creatures, but Explosive Growth saved the Caldera Kavu, while a third mountain and Urborg Uprising returned the Kavu to Trevor's hand. Pierre attacked for four, then played Sparkcaster, returning the Kavu to his hand. Trevor played a third swamp and cast Plague Spores, destroying the Sparkcaster and Pierre's swamp. Pierre attacked with the token, dropping Trevor to thirteen, then cast the Caldera Kavu again. Trevor played the Scout again, and Geothermal Crevice, while Pierre attacked with the two creatures again. Trevor traded Kavu for Kavu, going to eleven, and Pierre played Firebrand Ranger, then passed the turn. Trevor played Firescreamer, then passed the turn, and when Pierre attacked Trevor took the four damage, then Pierre added to his creature force by casting Kavu Aggressor. Trevor cast a one-point Soul Burn on the Ranger, going to eight, then Magma Bursted the token and Aggressor, finishing the turn up with an attack from the Firescreamer. Pierre still had no card he could play, and so it was Trevor's turn again with the board position in Trevor's favor for the first time all game.

Trevor's Firescreamer attacked for four damage, and Grave Defiler was cast but revealed no Zombies to play. Pierre was still helpless, and the Screamer hit for five, making a total of seven overall, and France fell to Trevor Blackwell, with Eugene Harvey having already won his match.