Round 2:
A Clash of National Titans

There are only two teams in the World Magic Cup who have a full complement of players with Pro Tour experience: Belgium and the Slovak Republic.

These two powerhouse teams faced one another in the second round as Belgian National Champion Vincent Lemoine squared off against Ivan Floch, just one of a star-studded crew from the Slovak Republic who have represented their country a number of times before in team competition. Lemoine was the only Belgian who had not drafted blue, instead going for a red-green deck sporting an impressive collection of copies of Timberpack Wolf. 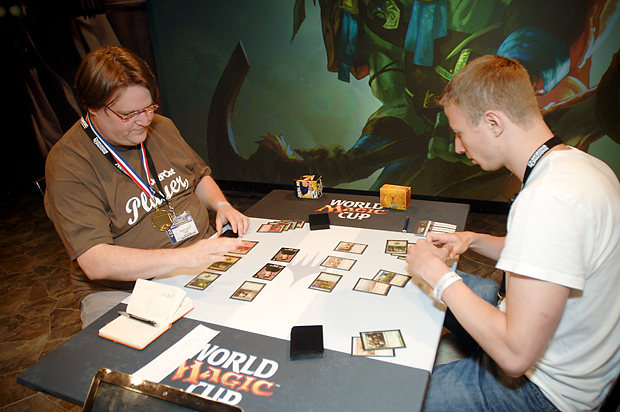 Vincent Lemoine and Ivan Floch represent their then-undefeated teams in the second round of the World Magic Cup.

Individually, both Lemoine and Floch were 1–0 on the day. Potentially importantly, though, the Slovak Republic had yet to drop a match in total, compared to Belgium's 2–2 start in Round 1, making them the team to beat for those trying to secure a high seeding for later stages of play.

Lemoine, on the play, had a Forest and a Mountain to enable a turn-two Krenko's Command. He used a pair of Geoffrey Siron tokens (Siron being the one Belgian Pro Tour winner) as his Goblin tokens, and was soon swinging in with them, as Floch's first play wasn't until turn three, with Guardians of Akrasa.

Lemoine was a little slow to find his third land, but he had a Titanic Growth to ensure his Goblin force could keep profitably attacking, killing off Guardians of Akrasa when they blocked. A Spiked Baloth came out from Floch and elected not to block a Goblin, just in case.

It seemed likely that Game 1 would be over when Acidic Slime took out one of Lemoine's lands. The wily Belgian still had options, though. A Kindled Fury meant that Spiked Baloth was taken down by a Goblin token, and Lemoine soon found a new Forest to replace the one he'd lost.

Finally, Lemoine reached three lands, allowing for a Centaur Courser. Floch was on the exalted plan, playing Angelic Benediction and using it to tap down the Centaur before Lemoine could block with it. The life totals were for the first time in Floch's favour, with 13 playing 15. A Serra Avenger came down next for the Slovak player, who was finally starting to leverage his land advantage for the first time in the game. 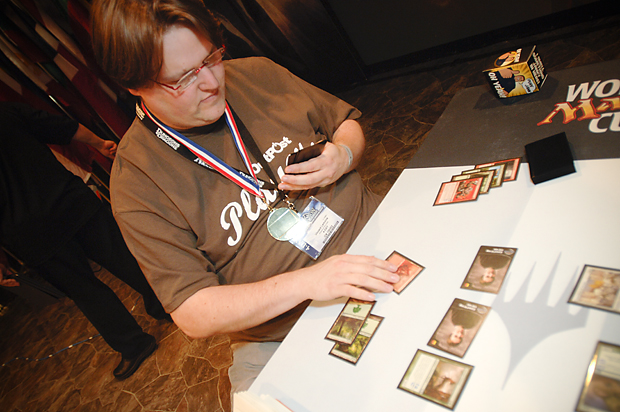 Belgian Team Captain Vincent Lemoine struggles against both his opponent and a lack of lands.

Lemoine thought for a little before playing Arms Dealer. He took 5 in the air from Floch, who followed up with Prized Elephant. A second Mountain was right on time to threaten two Arms Dealer activations. Suddenly, Floch's exalted plan wasn't looking so sharp. Floch cast an Oblivion Ring, to which Lemoine responded by killing Prized Elephant. When he tried to kill Serra Avenger, Floch showed a Titanic Growth to keep it alive. Lemoine scooped up his cards, disgusted at the mana issues that had sealed his fate in Game 1.

A turn-two Flinthoof Boar from Lemoine was a 3/3 from the get-go, thanks to a Mountain right on time. He had a Centaur Courser to follow it up with, and was able to swing in for 3 without consequence on turn three in spite of an Ajani's Sunstriker. The Sunstriker got back in for 3 on the return thanks to Guardians of Akrasa, but the very next turn Lemoine was able to secure a two-for-one with Flames of the Firebrand, by using it to deal 2 to the Sunstriker and the remaining point to the defender, after it blocked Flinthoof Boar.

Spiked Baloth from Floch traded with Centaur Courser before Lemoine played a Timberpack Wolf. Floch's plans on the ground didn't seem to be enough to get things done, so he moved to the air, first with Serra Avenger and then Aven Squire to back it up. When Lemoine tried to kill off the Avenger in a fight with Timberpack Wolf using Titanic Growth, Floch had a Show of Valor ready. 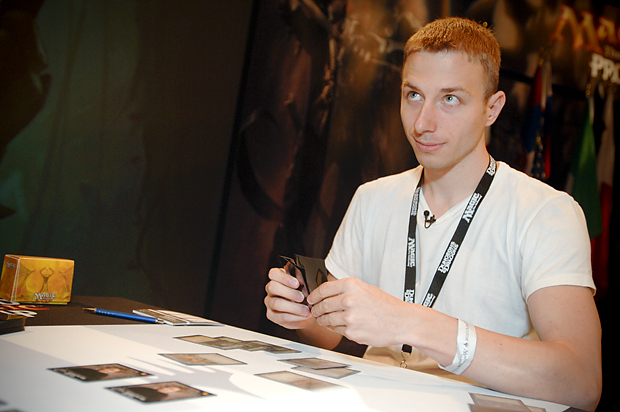 Soon enough, Floch was forced to trade off his board to stay alive, as Lemoine was relentless in his attacks. The life totals were 9 to 6 in the Belgian's favour, but the face of things soon changed, when Captain of the Watch allowed Floch to refill in a decisive fashion.

It seemed that, compared to the preceding game where Lemoine could not draw lands, he could now draw nothing but. The momentum shift of Captain of the Watch was enough to allow Floch to prolong the Slovak Republic's unblemished record in the World Magic Cup.