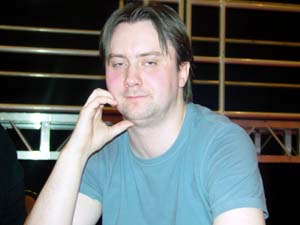 of these players from Sweden are easily among the world's best. Osterberg has had a huge breakout season, making the finals of Pro Tour Boston before winning it all at Pro Tour New Orleans. He's currently the leader in the Player of the Year race, fourteen points ahead of Nicolai Herzog who is trailing him in second. His opponent Jonsson added another big finish to his resume with a third Top 8 appearance at Amsterdam in January. Both are playing the same deck this weekend, although they have different sideboards.

For the first turns of the game, both players simply built up their resources with Talismans. Osterberg summoned Arc-Slogger, and it died to Flamebreak and Electrostatic Bolt. Shatter took out one of Jonsson's Talismans, and Osterberg played Solemn Simulacrum. Furnace Dragon followed soon after, and Jonsson conceded. 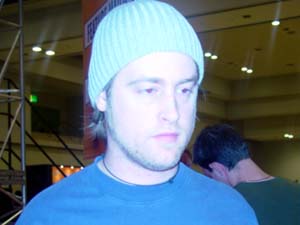 Both players exchanged Talismans and Detonates, and summoned their own Simulacrums. They traded in combat, and Jonsson played another. Once again, Osterberg had Furnace Dragon, but this time Jonsson had one of his own. Osterberg had the Terror to kill it, however, and an attack and a Fireball brought Jonsson down to four. A Fireball came from the other side of the table to kill the Dragon and keep Jonsson alive, but Osterberg put another lethal threat on the table by making a 5/5 creature with One Dozen Eyes. Jonsson stopped the attack with Arc-Slogger, but it didn't matter as Osterberg played his own Slogger and had two mana open to deal exactly four damage and win.