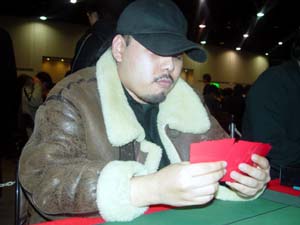 versus thuggery? Perhaps. Tsuyoshi Fujita always looks dapper, elegant and refined in his scarf, while Masayuki Higashino looks more like the kind of guy who would start a fight with you in a bar if you so much as looked at him the wrong way. And win. Appearances aside, Fujita and Higashino have been friends since before they started playing Magic, and are on the same playtest team. Both are true veterans of the game, and Higashino even won the first Grand Prix Sendai, back in 1999.

Higashino accelerated with a turn two Talisman, and Fujita summoned Arcbound Stinger. Troll Ascetic gave Higashino a massive threat on turn three, but he missed a land drop. The Stinger attacked for one, and Fujita played Silver Myr. Higashino found another land, attacked with the Ascetic, and summoned Tel-Jilal Wolf. Fujita attacked once more through the air, and played an Enforcer, which at least prevented the Troll from attacking. Higashino put a Pteron Ghost in the air, and Fujita's attack was entirely nullified, as he simply played Leonin Guard and ended his turn. Higashino played another Ghost and Sunstrike Trident a turn later, and Fujita brought out a monster in Arcbound Lancer. Higashino put the Trident on a Ghost, and Fujita sent the Enforcer and Lancer into the Red Zone. Thanks to Razor Barrier, the Enforcer survived and took down a Ghost, as the board shifted in Fujita's favor even more. Higashino offered up a little resistance with Tanglewalker and Leonin Den-Guard, and Echoing Ruin targeted a Trident, trading with a Ghost. Fujita now attacked with the Lancer and Stinger- the Troll stopped the Lancer in combat and regenerated.

With the Troll now tapped, Fujita cast Blinding Beam with entwine, putting Higashino in a bad position next turn. He managed to make the best of the situation, playing Mindslaver and surviving the post-Beam attack. He activated the Mindslaver, equipped the Den-Guard with the Trident, and attacked with his team to bring Fujita to ten. At four life Higashino wasn't going to survive long, and when he controlled Fujita's turn all he had to work with was a land in hand. Higashino played a Spawning Pit, and when Fujita attacked, he was able to take down Myr Enforcer with a Troll that became bigger thanks to Predator's Strike. Plus, the Troll was equipped with the Trident and poised to smack Fujita for six. Fujita thought for a bit, cringed, moaned, and scooped up his cards. 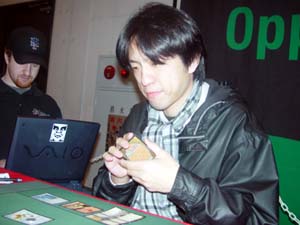 Fujita mulliganed his opening hand, and didn't fare too well with the hand he got back as he missed his third land drop. Higashino had no problems, playing a Myr and a third turn Razor Golem. Fujita tried to keep pace with Echoing Ruin to take out the 3/4 creature, but mana screw when playing first is hard to overcome in limited. Higashino played two Ghosts, Nim Replica and Vulshok Morningstar, while Fujita found a third mana source in a Talisman, and a turn later was able to summon Spikeshot Goblin. Higashino played a Den-Guard, and Fujita drew and played a land, but was far behind. His Spikeshot went into combat and came out bigger and stronger thanks to Test of Faith, but any hopes of a comeback were dashed by Mindslaver.