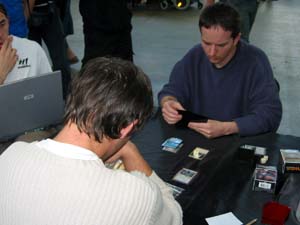 is running a blue black control deck, which is not the ideal match up for Antoine's Tooth and Nail deck which doesn't like much counters and Death Cloud.

Matthias wins the flip and elects to play first. He gets a fast start with Talisman of Dominance on turn two, thirst on turn three and solemn on turn four. But the frenchman´s start is impressive to as he manages however to get the mana advantage. On first turn he lays a cloudpost, quickly followed by Justice on the Talisman, oblivion stone and eventually reap and sow for the second cloudpost.

Matthias insists with core card advantage as his fifth turn offers him whisper and a second simulacrum. But once again Antoine plays reap and sow, with entwine this time and gets a third cloudpost into play.

Then Matthias get the key play of the game, playing mox and death cloud for four. Hands were emptied but the German get two cards from the solemn, and he has three manas on the table while Antoine kept two cloudposts. The game seemed quite over when Lerch drew Chimering Rats and a third Solemn, but Antoine manages to survive thanks to a couple of Oblivion Stone stopping the beatdown at one life.

A few turns later, when the game seemed to be tied again, Antoine tapped out for a Mindslaver while a Serum Vision had guaranteed Matthias to be drawing the lethal second cloud on the next turn

Once again, Antoine´s start is pretty strong with cloud post turn one, Sylvan scrying for the second. Matthias is opening pretty strong too with turn two talisman turn three solemn. Though, Antoine doesn't seem to ever stop , adding oblivion stone and two reap and sow with entwine in the next two turns letting him with 18 manas when Matthias only has two swamps on the table.

Molder Slug was the next threat on Ruel's side, forcing Lerch to play a Suicide Death Cloud for one, which resulted in Antoine having any top deck to do to take the second game. It came right on the next turn, as Witness offered Antoine one more Reap and sow and a Nexus.

Thanks to this fast second game, players have the possibility to finish the third game they start 14 minutes from the end. 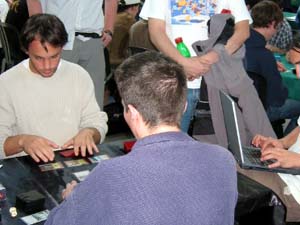 Once again Lerch´s draws are pretty strong (turn three rats, turn 4 solemn with Cloud and Thirst in backup) while Antoine plays his casual Reap for the second post on turn four after his trun three shaman faced the rat.

And on turn five, after he drew a mox, Lerch plays death cloud for three keeping three lands, a mox, and a card from Solemn and letting Ruel with two Cloudpost and forest on the table, and another forest in hand.

Then Antoine's deck offered him the ideal draw, as Molder Slug showed up from the top of Antoine's deck, followed on the next turn by Mindlslaver. Matthias tried to offer himself one more turn with Solemn but Antoine had a Duplicant waiting for the nicest Swedish.